Why It's Good to Lose Games

I had a great game last night. In fact I would go so far as to say that it was the best game of 40K I’ve ever played. And I did win, despite what the title of this post might first lead you to believe. But it got me thinking about about my progress as a 40K gamer since I came back to the hobby this past summer. And how losing has been a vital part of that.

Farmpunk and I went down to the south store so I could play someone new and so he could get one last night of 40K fun in before his new baby comes and makes him all bleary-eyed for a few months. I’m heading up to a tourney in next weekend and I wanted to get in some practice with the new build of my army. That’s it, up above in the picture. I just put the Bassie and the mortars together this last week. But nobody showed up to the north store on Wednesday except FP and DONKEY, so I didn’t get to try them out until last night.

At first the 40K attendance was sparse, and it was looking like I’d have to play DONKEY. Which would have been ok, as I want another shot at his Cheese Bikers. But I really wanted to play something more typical and well balanced to see how my tourney list would do. Or at least something in the MEQ department, since Marines and Chaos were 3 of the 4 games I played at the tourney. As luck would have it though, another Ork player showed up. Sporting a nice balanced tourney-style list. Perfect!!!

The battle was an awesome one. He was an experienced player, but newish to 5th edition. We rolled a Cap and Control with the Spearhead deployment and went at it. Three and a half hours later I claimed victory with my objective held and his contested at the end of turn seven, but he would have won had the game ended on turn 5.
The dice gods were fickle, giving us both horrible rolls again and again with the occasional gift like the direct hit with my new Bassie that shredded half of the 19-Boy mob threatening my objective without hitting any of my surrounding units. Oh man!

But the best part of the game was that for the first time ever I felt like my army functioned as a cohesive whole, rather than just a collection of different parts. Which got me thinking about how my recent spate of losses and draws has really helped me improve my unit choices and overall tactical thinking. Sure, I won this game and the one before it against DONKEY hastily borrowed Marines. But prior to that my 10-game record was 1/5/4. Which is a far cry from the 6/4/0 I enjoyed for my first 10 games of 5th.

“Geez!” I hear you saying. “That Sucks Dude!” And yeah, it did. But it also provided an opportunity for growth. So here’s 3 ways that I think losing can improve your 40K gaming skills. Assuming you have the right attitude to learn from your mistakes.

After a loss, are you thinking about what colors to paint your Hardened Vet Squad or how you’re going to convert a Chimera APC into a customized Hydra AA Tank? Hell no! You’re thinking about how you lost a game because you moved your troops toward the objective one turn too late. You’re thinking for the 39th time that you should have outflanked that Sentinel into his heavy weapons squads instead of putting it in regular reserve during deployment. Or you’re thinking again of how just one or two melta guns in the right place could have kept that Land Raider from contesting your home table quarter at the tournament you tied for 3rd place at.

And since that’s what you’re thinking about, you’re going to start making changes in what you bring and how you play. Which leads me to my next point.

Losing games forces you to make painful changes to your list.

I was really proud of myself back around late September. You see, I had an almost entirely painted 1500 pt. force! Which was great! I’m a VERY good painter. When I go gaming I get lots of attention for how good my models look. Typically I spend 3.5 hours on each of my rank and file and 6-8 hours on my heroes. That’s a huge time commitment. So when I get a unit painted I want to use it!

Problem was, while my army looked great, it wasn’t winning that many games. Especially when I went up against veteran players. Because, like many painters, I had bought things based on how good they looked rather than how well they played. So my army had too many elite and heavy support choices for its size. With just the bare minimum number of troop choices and a couple of Sentinels for fast attack.

So when I started losing more than I won I was forced to consider what was working in my army and what wasn’t. You’ve seen my current army up above. Here’s what I DIDN’T use from my collection. Ouch! It’s a whole army unto itself. Some of it’s new stuff I’ve bought recently, but most of it was bought back in 1998 and 1999 when I was playing a mere 4-6 games a year of 2nd and 3rd edition in a friend’s garage. I wasn’t winning much. But I wasn’t losing enough to learn from my mistakes either. So I just bought stuff that looked cool without really thinking about how it would be played. 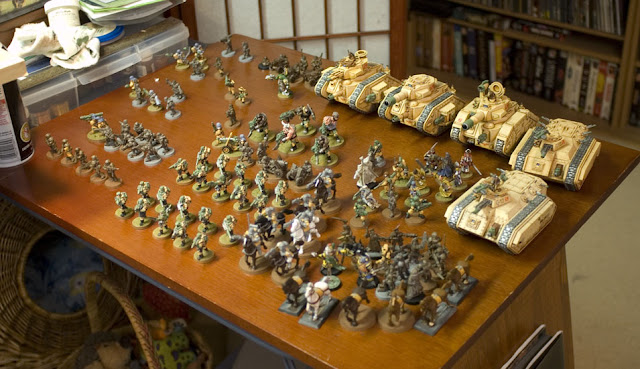 It’s painful to see 5 lovingly painted tanks sitting there unused. Three of which were completed since I started playing 5th edition eight months ago. But I had to face the fact that Chimeras are way too overpriced in 5th. For just 10 points per squad I can outflank into the right and left table edges, making them obsolete even as shield walls.

The Russes are out as well. Since the Demolisher is far more effective against Termies and Ork Nobs. Both of which will walk right through a large AP3 Blast. And the new cover rules mean that even Grots and Gaunts can save against it if they’re positioned carefully. And the Exterminator, while a slightly better value than a Russ, is just not as survivable In the anti-horde role as cheaper heavy bolter or autocannon squad is. And the squad can be given the Sharpshooter doctrine, making it more likely for them to hit.

My twenty Stormtroopers with their 7-layer camouflage are a waste of points too. They simply don’t do anything well compared to cheaper troops with the Light Infantry or Drop Troop doctrines. And while I like the Ogryns a lot as fighters, they’re tactically inflexible compared to a squad of six Rough Riders at 2/3rds the points which can threaten anything within 18-24 inches of my table edge. See those Priests and Commissars by the tanks? Same story. Overpriced and under performing.

Point is, I just wouldn’t have the heart to cut any of these units out of my list if I was winning even 50% of my games lately. I fell in love with all of them while painting them. They look cool! But that’s the value of losing. It forces changes. 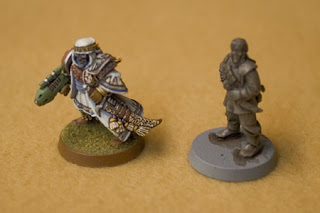 On the left we have a wonderfully painted model of Prince-Colonel Feisal Abu Tallarn. Feisal has had a hard time in 5th. As I keep taking away all his toys. When I first started playing with him in 3rd edition, he would routinely get the works. Master Crafted Power Weapon, Master Crafted Plasma Pistol, Bionics, Carapace Armor, Refractor Field, Trademark Item, etc. Problem is, NONE OF THAT GEAR HAS EVER WON ME A GAME! Never. Because even if you tool up a guard command squad with 400 pts. of close-combat veterans, a Commissar, and a Priest the best he’ll ever be able to is cut through a unit of Ork Boyz. Not Nobs, just regular Boyz. And once he’s taken out that 200 pt. unit of Boyz the Warboss will come right over and chop off his head. That is, if the Commissar doesn’t do it first for failing to make a leadership role. And so he’s down to just his power sword and plasma pistol these days. Which is just about the minimum I can give him and still use his model. And so today I’m giving him his pink slip.

On the right is Colonel Lawrence. Who was recently airlifted in from Forge World via the eBay sector after a horrific tank battle injury and given new plastic legs. has a laspistol, close combat weapon, AND NOTHING ELSE.

Well… maybe an Honorifica so I can save five points. Point is, he's there to lead and nothing else.

Feisal was my last sacred cow. The one mini I had in my army who was not replaceable. But his end came during this last, awesome battle with the Orks. For, at the brink of possible failure, my objective was saved not by Feisal, who once again fell under a green Orky mob without causing a single wound. But by a well placed Basilisk round and 21 nearby lasguns firing 2 shots each. Because the strength of the guard is not in it’s characters, but it’s troops. And the 15 points I’ll save can be better spent on them.

So Feisal is out. isn’t painted, but I can live with that for a while.

Finally, we come to the last way losing will help you.

Losing means you’re playing against people you can learn from.

There was a newbie that showed up to the south store with literally just the Black Reach box of Marines and Orks. If I’d wanted, I could have easily tabled him in a turn or three and felt very smug in my middle-tier superiority. But whipping him wouldn’t have taught me anything about the game. The guys I want to play are the ones who can actually beat me. Because losing another game to an experienced player will force me to think and adapt. And if I win against a Vet then it will actually mean I learned something.

So don’t be afraid to lose. It may be the most important thing you do.