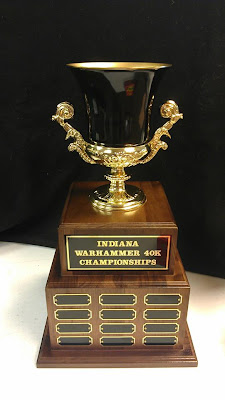 The 2013 Indiana Champion ended up being yours truly through a tough battle in Lafayette.  I was able to bring home the trophy for Tippcon also.  2014 will begin the 4 major tournaments of the Indiana Tournament Circuit.  4 different tournaments that grant immortality on the Winners Cup.  Will there be a new champion?  Will you get your name on the cup?  Or just have a great time.  With FrostyCon there are some much desired changes that you the players have been asking for..

Each Side belongs to one of the tournaments listed below.