Kickstarter: The Gift that Keeps On Giving... Disappointment


Consider me off the Kickstarter train.  Two bits of news dropped pre-Gencon this week that pretty much invalidated all the little remaining value I still had out of two of my largest Kickstarter investments.

I've known for a while that the next expansion for Relic Knights was going to be in more traditional spin-cast resin.  With the quality that they got out of the restic used for the primary game, I don't really blame them.  Someone asked what the future plans for the existing line were, and this was the response:

Since the game didn't do it for me, all I had left was a big pile of sort-of-nice miniatures.  Now people get to go buy the great quality I was originally promised as a backer.  That's cool.  My backing helped make the game actually happen.  I'll take the sloppy sub quality sculpts.  I guess.  I would happily accept half or even a third of the minis I actually got for quality resin versions.

Then there was Robotech.  So far only half of what I was promised has shown up.  In that half is a rule book so terribly edited that I couldn't even get though the second page of "rules", and miniatures so overly complex that I only built 6 before giving up.  It's not that I mind overly complex models.  I'm a major gunpla fan myself.  It's just, all that work, for models that don't even look that terribly detailed when finished.  It was so disappointing that I tossed the lot in a corner and didn't even bother writing a review.

Never mind that the second wave is not likely to ever happen in my lifetime, this bit of news was posed by a competitor.  The only value I had left from my Robotech minis was for accurate unseen. 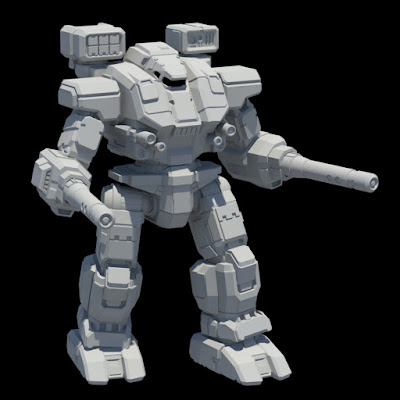 This is just a render, but there's some potential for being a very nice looking miniature.  Even if it only turns out as well as the Palladium version, I know who I'd ranter pay money to at this point. And it will probably be less than 28 parts, so that's a win right there.

Both these developments tank the resale value of the miniatures I've acquired.  There will now be objectively better versions in circulation.  What's worse is the money I spent is a direct precursor to these products even existing.  It's the same molds produced for the Relic Knights Kickstarter that are being used for the better quality pieces,  For the unseen, the Robotech KS showed there was a big market for the unseen mecha, and then Palladium dropped the ball and failed to fill it with an adequate product.  Catalyst seems more than happy to fill the void.

If I seem a bit callous in my analysis of the Operation Babylon Kickstarter, it's not that I don't sympathies with the backers. It's because the BS that they are dealing with isn't all that special. They're blaming Battlefront for the symptoms of a systemic problem.

These Kickstarters are not bringing us better products.   At least not for the backers. There are Kickstarter wins, but, for each one, FFG and other traditional manufactures(even GW) have released many products of equal and better quality.  Many of the wins are more in the card game and traditional board game realm anyway.  I haven't seen a miniature Kickstater gain any traction against Warmahordes or X-Wing or 40k.  Putting pretty colors on paper seems to work really well. Developing compelling products in three dimensions, not so much.

Contrary to popular opinion; we here at theBack40K don't enjoy being constant haters.  We're just critical of things.  Fawning fluff pieces on how everything is awesome don't help anybody.  When it comes to Kickstarters, everything is most assuredly not awesome.  I don't think it's because we've been backing the wrong horses in terms of the projects invested in.  I think KS's very nature does not incentivise quality results.

In traditional product development you have to make sure what you're making is going to sell. Otherwise the failure is completely on you.  With Kickstarters, the goal becomes fulfilling the rewards constrained by the initial funding.  Any money spent to improve quality is a hit against having the funds to fulfill a reward.  Schedule and quality are completely free to slip.  And slip they do.  Backers are completely powerless in the whole process.

It's an equation for broken promises and crushed dreams.
posted by CaulynDarr at 10:48 AM