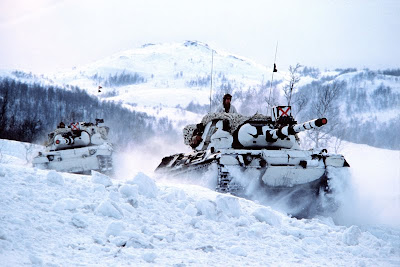 In my last post, I described my first BMG tourney game against the new Nids, where their lack of effective (and durable) anti-tank (due to the Comp Rules) hurt them badly, giving me a perfect 50 points for the first battle. Now as I prepared for my second battle, I saw that I'd be facing another Mech IG list. Hmmnnn... I thought. This could be interesting.

I'll dub my opponent "SnowJob" in honor of his army's theme and a generally lame GI-JOE character. 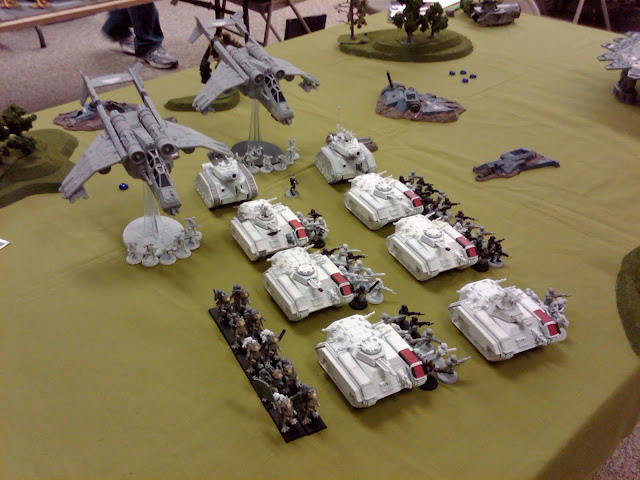 Do you see what I see? Not a single dedicated long range anti-tank unit. What the... ? I've seen this guy at the shop before. I KNOW he has Vendettas. Why did he take a Comp hit to field 2 Valkyries? And... Rough Riders? I mean I like Rough Riders, but they're a very bad fit for a Mech IG list.
He didn't have a printed army list on hand (sigh), but after he explained things I knew that the only AT he had was the 2 Demolishers, the Meltas in his Company Command Squad, and 2 Vet Chimeltas.
Wow! Who did he just get a major victory on?

The mission was Capture and Control with a Dawn of War Deployment. Five bonus points were available for killing your opponent's most expensive HQ and another 5 for keeping your own HQ alive.

I won the roll for first turn, but decided to let Snowjob go first instead. He deployed a single Chimera out in the center of the field, and held the rest back for a first turn roll-on. That lone Chimera then scooted back to it's friends so that they could advance together.

I put nothing out and just rolled on during my first turn. With the Plasma Vets held in reserve. To protect the sides of my Chimeras I pulled a Choo-Choo train maneuver and put my Russes on the sides facing him, with the Chimeras stacked up beside them. 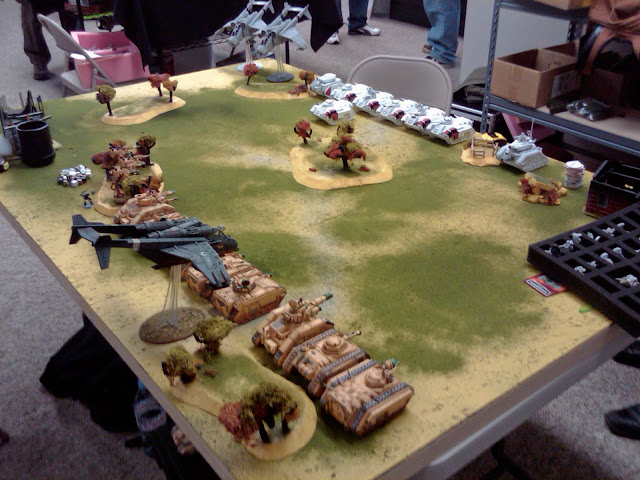 Bottom Of Turn One After SandWyrm's Movement
See that dark building on the right, next to his foam tray? That's where he put his objective. With the nearest scoring unit about 18" away. Mine is sitting under my Command Chimera just to the right of the woods where the Sentinels are deployed. He's the Beatdown and I'm the Controller. Come and get me sucka! 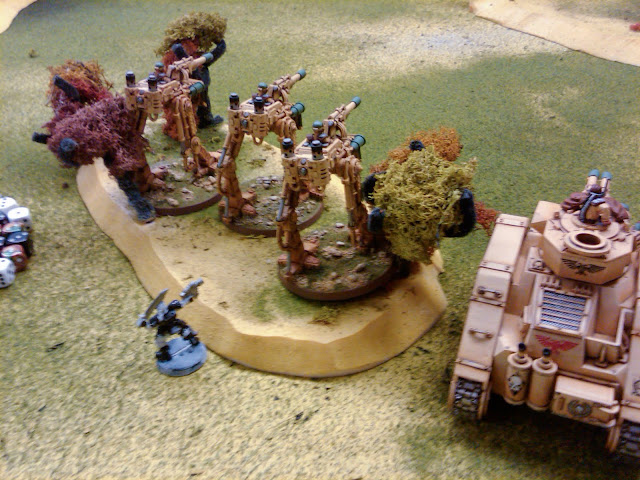 Uh Oh!
Marbo comes on and throws his demo charge straight up in the air instead of forward into my Sentinels. Bye Bye Marbo!

Snowjob does manage to immobilize my Vendetta with a Demolisher round. Fortunately though, it's stuck facing the space between his army and his objective. Nice! 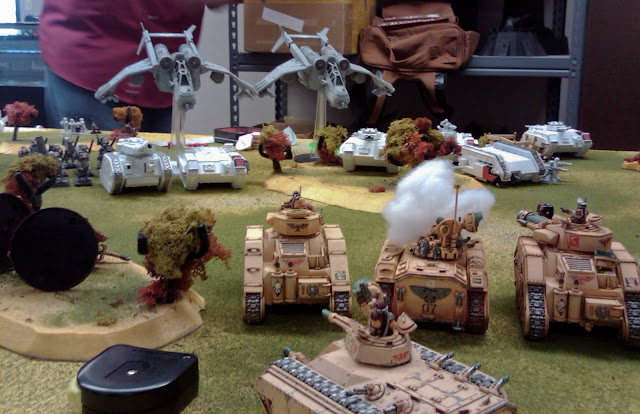 My Sentinels die to Snowjob's multi-lasers. But they're the only things those weapons can touch.
By the way, he's sending both his Chimeltas through the woods in front of me. I pop one using the Exterminator and kill it's squad with a follow-on shot from my Eradicator. The other Chimelta immobilizes itself in the woods and I kill the guys as they're forced forward using the Demolisher and my multi-lasers.
The Valkyries fly around, but I ignore them. They have nothing that can hurt me. Not even the squads inside. 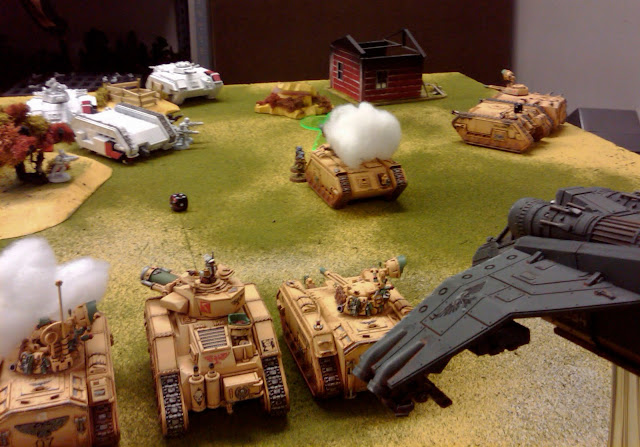 On the right, I pop a Demolisher with a Chimelta power-turn and Choo-Choo train another Chimelta onto his objective using the Hellhound as a shield. Every Chimera Snowjob sends that way gets popped or immobilized by the Vendetta. The survivors die in droves to both my template weapons and the Eradicator. That's where his HQ died. 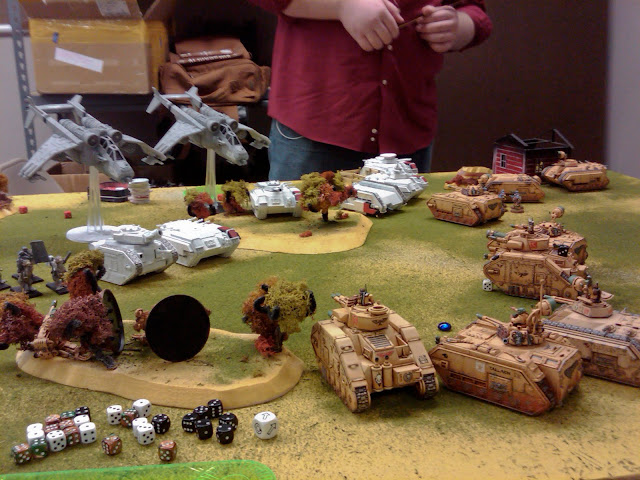 Mid-Game Shot
See the Taun-Tauns hiding behind the Demolisher on the left? Killed 'em with the Eradicator. Once my Plasma Vets moved on to secure my objective I power-turned a Chimelta on the last Demolisher to kill it. 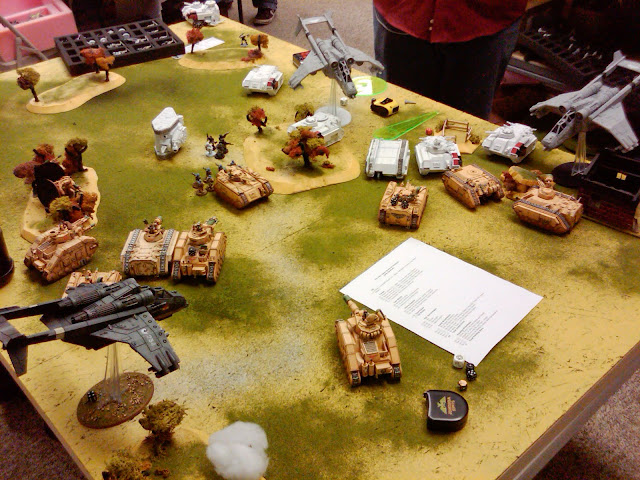 The End Of The Game
At the end of the game I had both objectives locked down pretty tight, with lots of enemy armor dead. The only question was whether his Valkyrie on the right was close enough to the objective to contest it. I measured and he was right on the edge. So I let him roll a 4+ for it. He made the roll, which turned my massacre into a minor victory instead. That didn't matter though. With the HQ bonuses and my Comp, I still got a perfect score.

In conclusion, I'm not sure what Snowjob was thinking. He has a reputation for fielding nasty net lists and getting beaten anyway by armies like Daemons. But this list was really just total fail.

After our game he started telling everyone that he was going to start a different army as he just couldn't win with IG. I gave him some tips and told him his problem wasn't the IG, but his tactics. But I'm not sure if I convinced him.