So Many targets, so few shots... revisited 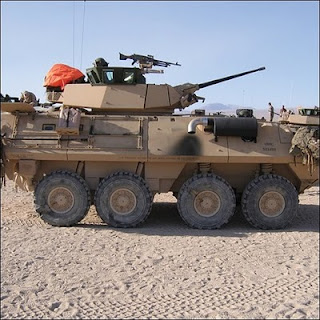 About a year ago I wrote an article with a very similar title about an Army concept I had come up with in 4th ed. I play primarially WitchHunters. Back in 4th ed, Mechanized was about the only way to go with them. In fact, it still is for WH, IMHO. Especially with the benefits the new rules give Armor.(more...)

Go Big or go Home concept
There is a school of thought that bigger armor is better. To a certain extent it is. It's much harder to pop a Landraider or Leman Russ than it is to kill a Rhino, or Chimera. I'll go with the LandRaider example. The big armor should draw fire away from your smaller tanks. I've done this with some DH forces.

I'll pack a Land Raider Crusader with a Brother Captain, and a bunch of GK's, then take as many IST squads w/2meltaguns, and pack 'em in a few rhinos to act as anti-tank backup. Coming in at 125pts, I can have 2 of those for the price of a Land Raider! Not to mention the expensive GK's riding inside! It's not hard to end up with 500pts wrapped in a Land Raider and Squad, then have 4 small rhinos riding around.

If you went heavier, with 2 LRC's, you've only got room for 2 IST squads, and if you face another list with heavy armor, you're going to be wishing you'd brought more Meltas....

Your opponent is going to be happy you only brought 4, and 2 MultiMeltas on your big cans. He's also going to be pretty happy to easily tear up your 2 rhinos, thereby disabling a good portion of your melta. He's probably got Meltas himself to deal with your 2 big LandRaiders.

For me, with =I= forces, I prefer not to go all out big armor. If I'm going to do a list with big armor, it's going to be a DH force, with 4 IST Melta squads in rhinos (3 with smoke, all with E. Armor), a Land Raider Crusader, a Bro-Captain, and a squad of 6GK's that comes in at 1500pts.
not too bad. the GK squad isn't terrifying, but 6GK's and a Bro-Cap are nothing to sneeze at either.
going up to 1750, I'd prob get another IST rhino squad, and add 4GK's, probably give the Bro-Cap a Psychic hood while I'm at it.


Go Big Numbers
Going for broke on the numbers part of the game is different. We've all played opponents who brought 3 tanks, and thought they'd brought a lot of armor. Of course, 3 Land Raiders in 1500pts IS a lot of big armor, but that's not what I'm talking about. I'm talking about 3 Medium tanks, like Predators. 3 medium tanks isn't a lot of armor to deal with. Actually, 3 Russes isn't unreasonable either.
I used to get people who would choke when I'd sit down 8 tanks at 1500pts, and I wasn't trying to spam either.

Under 4th ed rules, I was running:
2 Exorcists
2 Chimeras (from Inducted Armored Fist squads)
1 Leman Russ
2 rhinos w/Sisters of Battle
1 immolator w/Celestians.
I'd put in a cheap Jumpy cannoness, for an HQ.
If I really tried, I prob. could have been able to get a 9th tank in there.

With that many light/medium tanks, what do you want to shoot first? If you stop one part of the force, another part will get you. If Induction allowed Veterans in Chimeras, I'd still be running a very similar list.

As it is, I can use platoons, and buy chimera, but have to take 2 platoons before I get a Leman Russ. So having a heavy armor option is out, and light armor saturation becomes more favorable.

I've been toying with a few builds, and came to a terrible conclusion:

If I drop St. Celestine, I can get another tank easily, and can probably pull a third chimera if I drop the commisar. He's there to make the combined squad stubborn anyhow...
I'd be up to 9 tanks. It's a lot of tanks, and not going over the top into full spam modes.

In full-on saturation mode, you can get a lot of immolators, but you're taking Heavy Immolators without anything inside. I prefer my opponent to have an army to deal with once the tanks are dead. also, I don't HAVE 10 immolator/rhinos. That's a whole lotta tanks. for an example of the "classic" immolator spam, here's St. John's take on it:
St. John's Immolator saturation list

How the IG can do Light armor saturation:
IG have a nice selection now for doing some light armor saturation. A Chimelta Vet squad at 155pts is pretty affordable. A Platoon squad w/melta coming in at 115pts is pretty cheap as well, but I think the platoon loses efficiency, and might have better uses than special weapon delivery. Special weapon teams show some promise as well, but I think vets might be about the best choice.

let's look at some ideas:

If you want sheer numbers of light armor on the board, platoons are the way to go. I think however that part of the need for light armor saturation is to have decent chances for special weapons delivery. Since platoon squads aren't great for special wepaon delivery, we can try using them for something they're better at:
Heavy weapons.

Hmm 365pts. if you duplicated that, it's  730pts, and fills 2 troops choices. It's 4 fire support tanks, and 2 aggressive tanks. all scoring. If you fill out your troops choices with chimelta vets, you're looking at 1350pts.

but it's 10 AV 12 tanks! Sprinkle in a 70pt Primaris psyker for a HQ, and you're at 1420, you could still get some sentinels for harassment.

I've discouraged the idea of platoon squads with Hweapons inside chimeras before. I think they might be able to work in a light armor saturation setting. With targets that need to be targeted and dealt with before they get to their destination, the Hweapon chimeras could sit and do their work.

This idea might be executed a bit better with armored sentinels, rather than platoons, since the sentinels are cheaper than men in chugs. There is a certain amount of need with saturation lists for high numbers of targets, which might be defeated by squadroning. Then again, a higher value target such as 3 sentinels stuck together might be good, and pull higher target priority away from your advancing chimeltas.

for 360pts, you can have 9 scout Sentinels w/autocannons. so we drop a platoon.

with the leftover 85 points, I'm not sure what I'd want to spend it on. I'l have to think on it more. as it stands, there's 16 light armor on the board. that's a lot of light armor. 11 Autocannons, 7 multilasers, 7 Hflamers, 12 BS4, and 4 BS3 Meltas, and 2 Grenade launchers to deal with, plus the psyker riding with the platoon command.
I dunno, maybe a Brother Captain w/psychic hood might be nice for giggles.

but anyway, that's light armor saturation. With so many targets, it's hard to prioritize, and it's hard to take down ALL of a type of unit. If spam isn't your thing, and you want a different unit, rather than 4 Chimelta vets, you COULD ally in a Celetsian melta unit in immolator, and a Palatine w/ celestian retinue in immolator, or dominion squad in immolators. It wouldn't be spam, but people still might not like you very much.

I hope you guys like this, I'll try to put up some tactics for using tanks. tanks as roadblocks! tanks as moving terrain for firing between! Tanks as paperweights!

as per ususal, let us know if there's a topic you'd like covered.
posted by Farmpunk at 2:30 PM