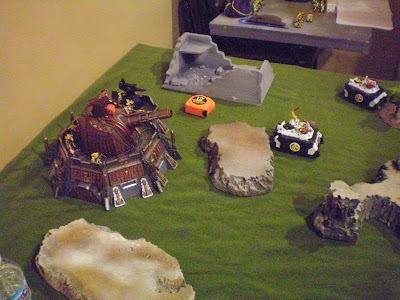 Here in Indy we just had a Trial by Fire tournament, which allowed both stronghold assault and Escalation as well as forge world in full. It was a tournament to test to see what actual combos could be taken, and how powerful and over the top it would be. I was planning on just adding a Baracuda to my list, but my order didn't arrive till the night before. So I took my standard Tau+marine tournament list and see how it held up.

It was 1500 point level, and the mission/deployment/specials were done as per dust I'm told. Players could bid to change each aspect.

My first match up was against sisters of battle, with Coteaz from Inq book with a Aquila stronghold piece. He had Coteaz and a 10 man sister squad controlling the cannon, a five man squad on the Icurus lascannon to the side, some multimelta transports midfield and held a lot in reserves. We end up with KP on hammer and anvil. I deployed and was ready to fire lascannons and try and get some Meltas up to that cannon to stop it from firing its D blasts. Coteaz gave him the reroll to seize and got it.

First up he hits my sniper drone squad, with my ethereal and quad gun and clips my sky ray. ouch. On my turn I'm hard pressed, so I drop my melta squad right next to it, an inch away and am ready to fire my lascannons first to take of the void shield. Coteaz was expecting me, and intercepts the D cannon onto my droppod, which also lets him hit my tactical squad.

BS5 with precsience means he hits, and I'm down 4 KP and no means of hurting the fortification as my lascannons can only glance it. This is before I get to my first turn of shooting. So I shake on the game there. Sure I might have been able to pick up some transports and small sister squads, but he held a lot back, and there is no way I can get a cross the table with out getting fired on by the D cannon.


Round 2 pits me against screamer star. He had lost his first game against GKs with vindicare assassin that popped his combo first turn. We get KPs again, with table quarter deployment. I have first turn, and deploy all but my droppod marines and Fire warriors. My tactical squad deviates 11 inches away from its mark, meaning I can't fire into fateweaver like I wanted to, so I just fire into the screamers in front. 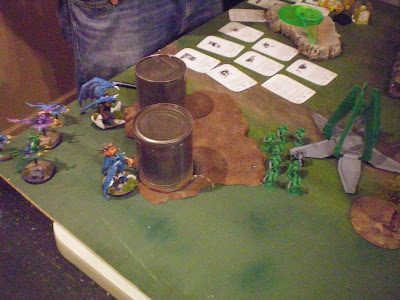 With melta, S8 large blasts from the riptide, along with lascannons, I'm able to double out a lot of screamers from the start, killing 5 of the 7 I think and a herald from the go. He then flies up with fatey and the deamonprince, and try and cast on my units. Having Tiggy with me I manage to deny the majority of them by luck. Screamer star gets stuck in against my marines and will kill them on my next turn.

I got the sky fire warlord trait on my ethereal, so I called in that chip to let my snipers take down fatey in their shooting. Mean while my sky ray, riptide and lascannons took down his deamonprince pretty well. His next turn sees one of his pink horror squads come in, and his screamer star move up field. My droppod assault squad comes in to counter, and three flamers hit a tightly packed horror squad killing them down to two. The Grimoire herald, 2 screamers, and one pink horror squad is all he has left, while I have only lost a tactical squad. Next turn I fire everything and all he has is a Screamer left by turn 4. 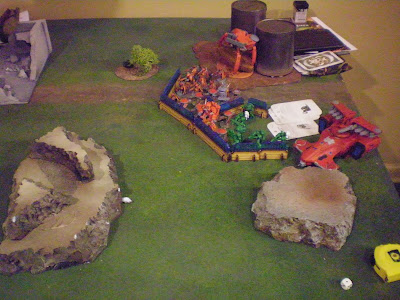 Important note was his second herald killed itself with peril, and he rolled 11s on his powers multiple times, as well as my denying way more than average. 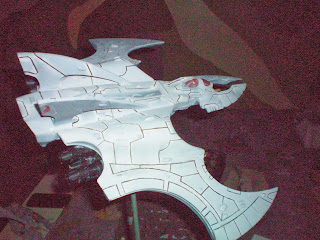 My third game pitted me against an eldar list, with the super heavy flier Vampire, and a Void shield Generator. First turn I fired lascannons at the generator as he had his wave serpent out of LoS. We were playing multiple objectives, and as his 3 man bike squad came in, I would focus fire into them with the riptide and lascannons. 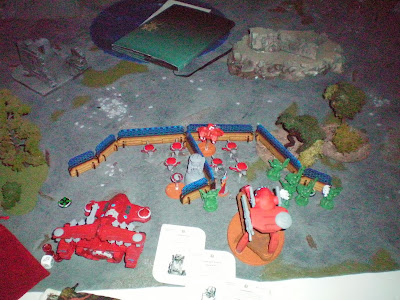 His Vampire didn't come in till last, which really hurt him as it let me focus on killing the rest of his army. I had him down to his farseer, in combat with marines by that turn. When it did come in, I fired the quad gun, and managed to snag 3 hullpoints just in case for that extra point. When it fired back, he hit directly to kill all three Hq models and my quadgun. 2 large blast D shots is very mean. 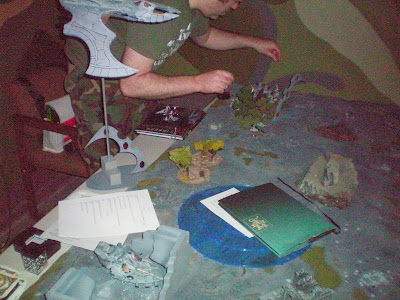 Afterwards we talked about how we felt about each of the things. For me D weapons have the same kind of issue Killpoints sometimes have. They treat a rhino and a Landraider the same. A 12 point drone will die as easily as a 250 point suit commander. They are just too powerful, and they also end up slowing down the game when fired against infantry.

It is a thought of how viable are Superheavies with out D weapons, are they worth their points, or are those too much of a liability. I know I'm definitely against Fortifications with D, and AV15. Both of those are ridiculous as you are much harder pressed to kill it, since it has not hullpoints, higher AV means even less likely to pen, and no bonus points for doing damage to it. And at the same time, it can be manned and fired, and thus buffed and arbitrarily made better by certain armies.

Both the fortification and the voidshield generator had void shields, and neither time they gave me much trouble, as I simply fired my lascannons first to take the shield down. I can see it give a bit of trouble to some armies, but the way I have mine formatted they never bothered me. I'm not sure what the difference is between a Fortification and a Fortification network, but it looks like you can daisy chain 3 void shield relays, each with 3 shields being generated. That could be a tough nut to crack with out getting inside of it.

The Coteaz aquila fortification ended up in second to jetseer council, as it had the mobility to get in his face with most the army from the get go.

Has anyone else played an open tournament format like this yet?
posted by TheGraveMind at 9:46 AM