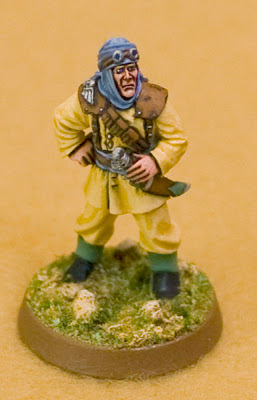 My single-minded obsession with preparing for the (ultimately disappointing) tourney up in Lafayette last month had riled up Mrs. Wyrm something awful. So to keep the peace I decided to show her I still loved her by giving up 40K for Lent. Yeah, I hear you all laughing. At least I painted my new general (above).

Anyhow, Easter has now come and gone. And I can happily report that Mrs. Wrym is feeling very loved again. So I'm off to the FLGS tonight to get back in the fight! To that end I've made TWO lists for tonight. One which uses the old codex, and one which uses a um... preview copy of the new codex. I tried to make them as similar as possible for the sake of comparisons. And to preserve my current play style as much as possible. There's been lots of talk on the forums about the flashy new units in the codex, but I thought I'd show what an existing army might gain/lose from the update.

And now for the new codex...

I'll leave it to my opponent to choose which army he gets to play tonight. But here's a rundown of the major differences as I see them.

They're not going to be as invincible as they used to be due to the new lack of leadership bubbles and the single model rule. But they are scoring now, which lets them sit on/protect the objective and free up the line squads to maneuver more. And the new orders system should make them even more effective against tanks and vehicles.

2) Troops are both cheaper and better equipped.

All infantry squads now come with Veteran Sgts and Frag Grenades. The only gripe I have is that Sgts can't take lasguns anymore. They HAVE to take a pistol. Which means I've had to pull my old Tallarn Sgt models back off the shelf. I had been using one of the more heroic looking Tallarn trooper models as my Sgts. But not anymore. That also means, since these models have plasma pistols, and plasma pistols are a waste of points, that I'll be converting them all to laspistols before the next tourney.
posted by SandWyrm at 2:52 PM