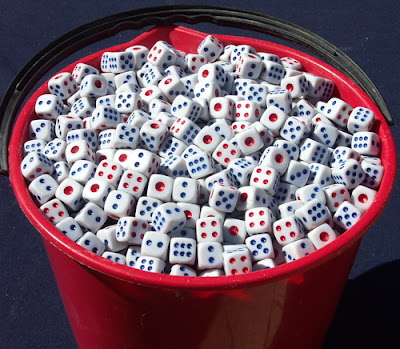 The intro says it all. We roll too many damn dice in this game. I think that most 40K players have an intuitive sense of that. But when you really stop to think about it, you realize how ridiculous the current situation really is. Most especially, you realize that GW is adding more and more detail to the wrong die rolls!

Let me lay it out graphically for you. We'll imagine that a lone Imperial Guardsman with a lasgun is attempting to shoot and kill a stock FNP Blood Angel at 16". 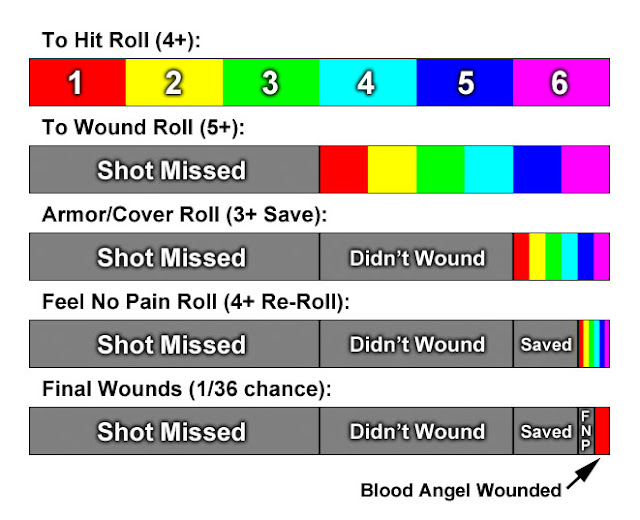 Let's go through it step by step...
A successful shot then, means that 4 dice have been rolled.  One to hit, one to wound, one to save, and one for FNP. That's 4 dice to determine a result that could have been determined by only 2 dice.

Yep. If the Guardsman had needed a 6 to hit and a 6 to wound with no save allowed, the average result would be the same. Exactly the same. So in terms of efficiency, we're only half as efficient as we could be.

Hitting The Target Is Paramount!
Looking at that Graphic, it becomes obvious that hitting the target is the most important thing to do, as every other roll you make on the way to a wound is dependent on that one.

So you would think that 40K would have more options for improving your odds of hitting the target. But beyond twin-linking your gun (adding yet another dependent roll), there's nothing. Nada. There's all sorts of FNP/Invul saves happening at the OTHER end. Where the differences between outcomes are ridiculously small.

But for a Dark Eldar warrior, what's that FNP worth?

So the Dark Eldar warrior gets 8x the FNP benefit of the Terminator when facing bolters, because he gets no armor save. But what else would provide an 8/36 outcome for wounding?

So, increasing the Warrior's toughness by 2 points would give you the exact same effect as 4+ FNP with fewer rolls. Why not just increase their toughness?

Other things become obvious when you think about them. For instance, with a BS3 firer shooting an AP2 weapon, reducing their to-hit roll by 1 has the same effect as a 5+ cover save for the target. Which is what the consensus opinion of late seems to think that cover saves should be.

Or take Ork shooting. Orks are bad at hitting things, so to give them a chance at all, GW tends to give them either more shots or twin-link their shots. They then feel guilty about Orks hitting targets, so they make the number of shots random (Lootas). When the obvious answer is simply to increase the BS of certain Orks by 1 or 2, while decreasing another stat like WS, T, or Leadership. Or design Orks in such a way that they don't need to shoot at all to win.

So What's Your Point?
My point is that 40K is needlessly convoluted. We roll about twice as many dice, twice as many times as we need to. As a rule, the game should aim to have us roll no more than about 20 dice at once. With a bias towards it being 15 or fewer dice. You know, a standard handful.

In the name of making the math simpler, GW has added complexity where it's not needed. The 40-60 dice that Orks routinely roll for shooting or combat is a band-aid for more fundamental stat problems that need to be addressed. Math is hard? Well so is adding/remembering the results of rolling 18 dice 3 times (sometimes with re-rolls) just to see if you hit. If you need that many attacks something is broken.

You only need one primary roll and one secondary roll to get a granularity of 36 possible outcomes per die. That should be enough in most cases. For most models, their "armor save" should be wrapped into their toughness. Leave it to the Heroes, Monsters, and Tanks to get a "saving throw" at all. The current system only needs a third dependent roll because most everyone is running around with stats that are either a 3 or a 4. Bad designer!

So What Would You Do?
Instead of our current setup, where granularity of results is lost because most everyone needs a 3, 4, or 5 to hit or wound (using only half of the possible range), I'd replace it whole-hog with a different (but similar) system based on comparing stats.
Evasion is the big addition. It would signify how good a particular unit is at keeping their heads down, hugging cover, and moving in such a way as to make it harder to hit them. Models with really high evasion stats would be almost impossible to hit. While units in cover, or fast moving tanks, would get a bonus to their evasion.

Sound complicated? It's not. Here's the only chart you would ever need. It replaces the to-hit chart, the to-wound chart, and the BS conversion chart. 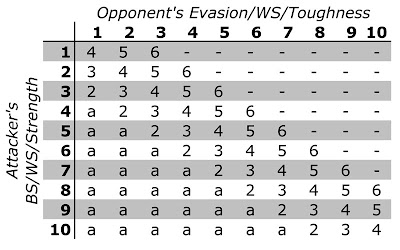 Looks familiar, right? We've all memorized 2 very similar charts already to play 40K. This just condenses them into 1 chart and removes the "awe, you still have a chance" exceptions to the very simple pattern. A target of 'a' means that you automatically hit/wound. A target of '-' means that you can't hit/wound at all.

Soft Cover would add +1/+2 to your evasion. Hard cover would add +1/+2 to your toughness. Tanks would get a +1 to their evasion for moving, and a +2 for moving fast. You get the idea. It's no more complicated than what we have now. In fact, it's less complicated because there are no strange exceptions to remember like T5 and T6 both needing a 6+ to wound with a lasgun.

Well, to get the Marine on Guard (and vice-versa) numbers to work out as they do now, (using Str3 lasguns/Attacks and STR 4 Bolters/Attacks), you would use the stats above. Whoh! Now Marines look like the badasses we always hear about! Instead of Marines only being 1 'level' higher in skill from a Guardsman, we have an obvious difference of 2 levels.

What also happens is that we open up a range between a Guardsman and a Marine for other troop types to fill. Eldar can slot right in as being more skilled than a Guardsman, but not as over the top as a Marine. While being significantly harder to hit. Guard Veterans can be more skilled at shooting without being the same BS as a Space Marine. Whoa! Meaningful differences!

And Terminators?... Well, they're tough enough that only S5 or higher weapons can even hurt them, but they're also more lumbering and easier to hit. The current rules, for all the dice we roll, can't really convey that.

Here's toughness values that mimic the armor values we have now. The toughness simply varies by facing. Slow, lumbering vehicles are easier to hit, while medium and faster vehicles can be given higher evasion values.

Vehicles would have somewhere between 3-6 wounds, like a monstrous creature.  If you do 2 or more wounds to a vehicle in a single round of firing, they take a critical hit. Which could modify evasion in addition to the usual shake/stun/weapon destroyed/immobilized results.

Conclusion
So there you have it. A core mechanic that's more balanced between rolls, allows for finer grained differences in troop types, and which is 25-33% faster to play. Maybe more.

I'm tempted to start writing a rules set. :)
posted by SandWyrm at 9:59 PM