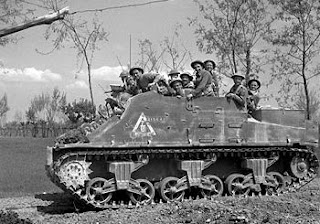 In his recent post on BoLS, JWolf listed the 10 reasons he sees for "The Decline Of The Mechanized Revolution". According to him, the balance has shifted to partially mechanized forces over fully mechanized ones. In some sort of constantly evolving rock-paper-scissors version of 40K.

Which is a load of fertilizer if you ask me. (more...)

After playing a year and a half of 5th edition, I'm firmly in the camp that believes in crafting balanced, all-comers lists that can handle any and all threats in the larger metagame. If you create a list that incorporates the 4 roles that I outlined in this article from last week, then the number of list changes you'll need to make in order to adapt to each new codex is relatively small.

As an example, what did I change in my list to adapt to the new Nids? Not very much. I simply swapped 2 Vanilla Russes for Eradicators, whose cover-denying blasts will also help me against Orks, Guard, and anyone else who isn't a Space Marine. As a bonus, I'm even using the exact-same models. No big deal. :)

Which is not to say that you can't create a fine, competitive list using some foot troops. But if your list is going to be balanced you still have to be able to handle the same 4 roles. It doesn't matter if you're packing Vendettas or mobbed-up infantry platoons as long as you can reliably pop light armor and MCs at range, for instance. Certain jobs still need to be done, no matter who's expected to do them.

But, too many people don't know how to create a balanced list. So they unbalance their force to some extreme (anti-horde, anti-tank, psychic attack) and win a bunch of games until their opponents catch on and counter those advantages with unbalanced focuses of their own. Thus perpetuating the rock-paper-scissors approach to 40K.

So with this in mind, let's look at each of JWolf's points and what I think of them.

10) Heavy Weapon Survivability. A Lascannon or Railgun can kill a Landraider in one shot. Over the course of a game, a 10-man tactical squad is unlikely to even have to take a morale check from the same weapon.

Who in their right mind is shooting Lascannons and Railguns at foot troops?

A properly balanced/played list will be shooting long-range anti-personnel weapons at the squad and their heavy AT weapons at tanks and artillery. So if this happens, your opponent has either unbalanced their list towards anti-tank, or you have unbalanced yours towards too many foot troops. He'll own mech forces and die to hoards, while you've sacrificed your mobility for more firepower. Good luck taking objectives away from anybody without mobility.

9) Increased Firepower. Almost any unit will be able to produce a greater volume of fire outside of their transports than within.

Yeah, but... how far can they deliver that fire? Marine and Guard rapid-fire weapons can only shoot 24" if the squad stands still. That's not far enough to reach the enemy's deployment zone from yours, and if they move they only shoot 12" (18" total threat).

So somehow you have to get into range to use this firepower. You can either walk for a turn, or you can ride in a nice, safe transport. If you walk, you're dead as soon as the enemy starts dropping templates on your head. If you ride, your enemy has to blow the transport first. Keeping you safe for a turn and giving you cover to fire from behind when you disembark.

Thus, the only sane use of foot troops is to protect your home objective and/or deployment zone. Which depends on getting them into cover and staying there. If you're guard, you'd better make sure you pop the other guy's cover-denying anti-infantry firepower (Hellhounds, Eradicators, Collossi, HF Speeders, CC Dreds, etc.) or you're going to have a couple of bad turns at the start of the game. Later, you'd better be able to pop anything sporting a flamer or you won't be able to hold that objective.

8) Firemagnets. Troops on foot are attractive targets for enemy Ordnance and other AoE effects. Good use of walking troops will generally steer these effects towards the target of your choice. And remember that any Autocannon that shoots at those 2 last walking troops isn’t shooting your Rhinos.

Like with #9, he seems to be trusting that his opponent is an idiot. Which is never the wisest thing to do. Experienced players will be looking at your tactics, not your troops. Putting their shots where they matter most. Dumping ordnance on targets that don't matter is a newbie mistake.

7) Misdirection. Foot troops are almost guaranteed to be the targets of things like the Doom of Malan’tai, Mawlocs, Marbo, and other beasties that pop up in bad places. Using a squad to draw the attention of bad things with short ranges can take them out of the game without requiring a single shot to be fired. Nothing makes me happier than when Outflankers head towards the lone bait squad instead of moving towards objectives.

Again, he's depending on the other guy being an idiot.

6) All-Terrain Movement. Boots never become immobilized on a pile of rocks. With run, a squad will move almost as far as most transports anyway.

With a standard 2D6 difficult terrain move + 1D6 run, most foot units will move about 8" through area terrain. Whereas most vehicles will always be able to move 12" if they pass their difficult terrain check (83% chance of success). Over two turns, that's an 8" gap in distance moved, which is quite a lot.

5) Uniqueness Breeds Uncertainty. Most fully mechanized forces tend to look and feel the same. More importantly, good players understand these forces almost without thinking. Taking a partially mechanized force reduces the effectiveness of the average and above average player in making good decisions about how to stop you.

Now this is the one point I'll give JWolf. His recent tourney-winning army was quite a piece of work. To an eye trained in list efficiency and simplicity, it at first looks chaotic and unfocused. But if you really analyze it, it's a mean little list that exploits most people's lack of long-range cover-denying weapons.

Here it is, as best as I can decipher from his post:

It's still an unbalanced list that will get rolled by the first opponent he plays that brings along long-range cover-denying weapons. But most experienced players will dismiss it without thinking and turn off their critical faculties until the bear trap snaps shut.

4) An Empty Bus Gathers no Shots. Try driving some empty Rhinos and dropping some empty pods on the board. It’s amazing how they get ignored in favor of more important targets. This can leave you with a ride for those late-game rushes.

Yeah, you'll get a ride. IF you survive long enough to catch up to the transport that left you behind.

But why do it that way? Even if your squad's transport gets popped, they won't lose very many men (4 on average for Guard, 1-2 for Marines) and you'll either end up behind the wrecked transport in cover, standing in a crater (cover again) or you'll be close enough to charge into the fight.

So what, really, is the downside to advancing inside a tank? There really isn't one.

3) Nonlinear Units. The general case of nonlinear units is they are not able to ride the battlefield in style. Drop Pods, Deep Strikers, Jump Packs, and other non-linear units come in a lot of non-mechanized formats, and can be critically useful to successfully defeat many opponents. Driving a wall of Rhinos fender-to-fender across the board does win sometimes, but driving that wall across the board with Chosen coming in from the side wins more.

Any time someone uses the term "non-linear" to describe something mundane, look out! They're probably talking nonsense.

But, how does mech not fare well here? Troops coming in from reserves or outflanking need speed and protection to get where they're needed, and nothing gives you that like troop transports. Else you run the very real risk of being blown to pieces as soon as you come onto the board. Instead, why not make the other guy waste a turn blowing you out of your transport?

2) The Un-Metagame. Almost any environment produces a metagame, and almost all metagames cycle from mechanized to hordes and back again. Taking a partially mechanized force leaves you able to deal with both ends of the spectrum without taking too much of a beating against either. Our local gaming population is large enough to have multiple cycles going on within different subgroups, so riding in the middle makes the most sense here and on the road (where we have only guesses about the force mix that will be presented).

What universe is he playing in? I've not seen this mech-->foot-->mech cycle he's talking about. Nor have I seen it talked about anywhere else except this one post from JWolf's.

And again, I'm not saying that a mech+foot list isn't a viable idea. But ANY list you take needs to be a balanced all-comers list to be viable. It has to, in some way, handle light armor, heavy armor, hoardes, and provide enough mobility to get your guys where they need to go. Mixed lists come with advantages, sure. But they also come with downsides, just like Mech.

1) Synergy. Specializing units so that some are designed to ride, some to hide, and others to fire will help you to develop tactical synergies that actually win games. For example, a Tactical Combat Squad in a Rhino with Melta, Combi-melta, and Powerfist can effectively deliver Melta fire at a 2d6 range out to 21”. This Rhino is going to get shot. The same Combat Squad on foot, running with cover, isn’t going to be a priority target for a while. By the time it is in effective range, your long-range shooting may have diminished the available pool of fire, leaving the Combat Squad in better shape to proceed.

This sounds like some sort of convoluted corporate mission statement. Basically when you boil this one down he's pushing the idea of having many different kinds of units on the field. In the hopes of seeing synergies magically appear.

It's just so much blather to me, but I sense the reason behind it. JWolf isn't a reflective player. He's an instinctual player. Which is not to say he's bad, far from it. But I don't think that he really has the ability to spell out why he does what he does to win games. Because his battlefield abilities don't stem from the rational part of his brain, but rather the instinctual part. They come out in the playing and not during the planning. So he throws a little bit of everything into his lists and sees what his instincts come up with during the game itself.

Whereas, I make lists where most of the synergies are known and planned for from the beginning. :)
posted by SandWyrm at 7:48 PM