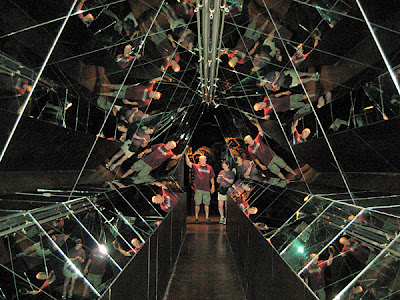 I headed over to Games 2 Die 4 this afternoon, hoping to get in a game of Flames, but it was not to be. I hadn't known that John was going to be running a 500-point 40K mini-tourney today. So the tables were already covered with 40K-Style terrain in anticipation. While I didn't play in the tourney (had to leave by 3:00), I did pull out the Blood Angels and play a couple of good games of 40K against Spag and TheGraveMind.

It's been about a month since my last 40K game, and I've gotten used to the Flames Of War rules, so even though I've played close to a couple of hundred games of 40K since '08, certain things about the game suddenly seemed really weird and illogical after getting used to Battlefront's system.

As I describe the battles, I'll note the stuff that seemed weird in red.

I was playing the Emo-Wing, my Blood Angels Sanguinary Guard army. For those who are unfamiliar with it, here's the list:


This is the same list that I've run since early April of last year.

Spag offered to play me with his Grey Knights or his Space Wolves (What? No Dark Eldar? Bad Spag!). I really didn't care, as I expected a hard game either way, so I let him choose. Spag chose the Knights. It's a Coteaz build. He was running a Libby + Strike Squad in a Storm Raven, a death star unit of Assassins and Crusaders in a Land Raider Crusader, 3 Psy-fleman Dreds (one venerable) and a standard Dred who was in the Raven. For scoring units, he had 3 small 3-man henchman squads. Plus another small strike squad with Coteaz attached.

The Armies in 40K and Flames are both company-sized. With a similar number of tanks and infantry on the table. But with the smaller scale, you're able to do things on a 3x larger battlefield. With much more terrain on the table. So seeing all those huge tanks huddled up around a Stormraven in what would be approximately 1/9th of a Flames battlefield just makes the 40K game look kind of... silly. Instead of laying down roads, towns, and a realistic looking countryside with farmhouses and rivers, you have all these abstract pieces of terrain everywhere that don't really look like anything specific.

We went NOVA-Style with 5 objectives. Primary was kill points, secondary was objectives, tertiary was table quarters. Deployment was Pitched Battle. 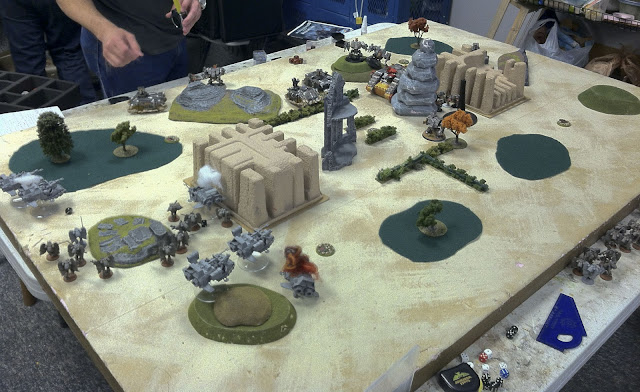 Here's our game at the bottom of turn 1. I won the roll-off and chose to go 2nd. Spag deployed center-left (his left), so I went all the way to his right, using the handy LOS-blocking terrain to my advantage. The Typhoon speeders managed to kill his Storm Raven in the middle of the table, forcing the Libby and Dred to walk. Nice!

Most of the missions in Flames have explicit attackers and defenders, and there's a hierarchy of army types when considering who's attacking and who's defending. Mech Infantry always attacks vs. Infantry. While Tank Companies always attack vs. Infantry or Mech Infantry. If you and your opponent have the same army type, you roll off. So if Jump Infantry existed in Flames, they'd probably always be the attacker vs. everyone. Which means that they'd more than likely go first. Not doing their best to go second. :)

In Flames, the games are all objective driven in the extreme. The various missions differ in how they're placed and in how the forces deploy, but your goal is always to capture an objective. As in, just one. If you take an objective and it's not contested by the beginning of your next turn, you win the game. Period.

So it's strange to be running around the table trying to kill things first and take objectives second. In the real world people fight over territory. Not simple body counts.

It's also strange to have all these objectives laying around, perfectly placed x inches from the table edges. In Flames, many of the missions only have objectives on the defender's side, which is balanced by making the defender reserve half of their forces.


Weirdness 4: Not Worrying About Ambushes

So let's say that you're defending against someone in Flames. All of the objectives are on your side of the table and you are forced to reserve half of your units. What do you get to balance your on-table weakness? AMBUSHES!!!

Basically, you get to take half of the units (rounded down) that you start on the table with and deploy them in ambush. At the beginning of any turn (even the first), you can put them anywhere on the table that's more than 16" away from an enemy unit, or you can deploy them up to 4" away if they're concealed. Which is basically anywhere that they're in cover. Like in a wood or behind a wall/hedge. When they appear, they can shoot at their full rate of fire and are considered to be dug in. Making them harder to kill.

I ambushed Farmpunk with a Tiger Tank once and killed an entire Sherman platoon in 2 turns. :)

How do you counter ambushes? With Recon (Recce) units. You can't deploy an ambush within 8" of a recon unit, so if you scoot a recon unit up against a wood, the enemy can't pop out of ambush there. Recon units also allow you to remove cover saves (actually to-hit modifiers for being gone-to-ground) from enemy models, so they're quite useful! 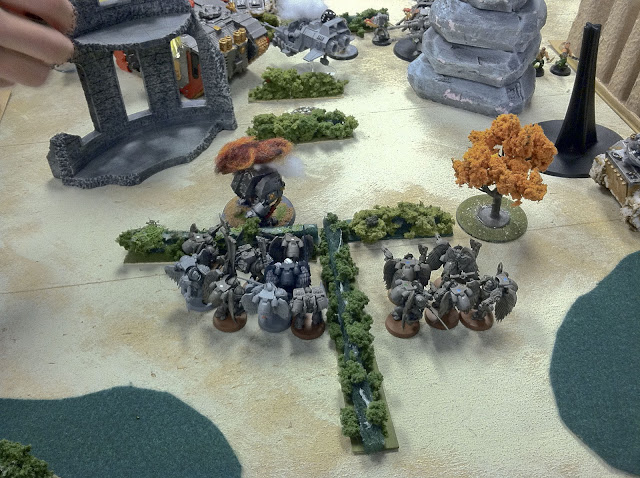 By turn 3, things were looking very bad for Spag. I'd killed a lot of his vehicles, and the Land Raider full of assassins was stuck on a hedge. I was effectively taking down his ability to move while staying away from his best units.

The movement phase is the least random part of 40K, but I was surprised by how random it feels to me now. In Flames you don't roll for how far troops move through difficult terrain. They simply can't march/run through it. And while vehicles do take a 40K-like test to see if they get stuck, the results aren't permanent. Tanks can roll again to free themselves on their next turn; they also can't shoot while stuck, as they're too busy trying to free themselves.

Vehicles that move flat-out (double normal movement) also don't get to turn more than once as they move. Infantry that run also can only move in a straight line. Moving flat out in Flames is also risky, as it lets your opponent shoot twice at your unit (because they're not advancing cautiously). 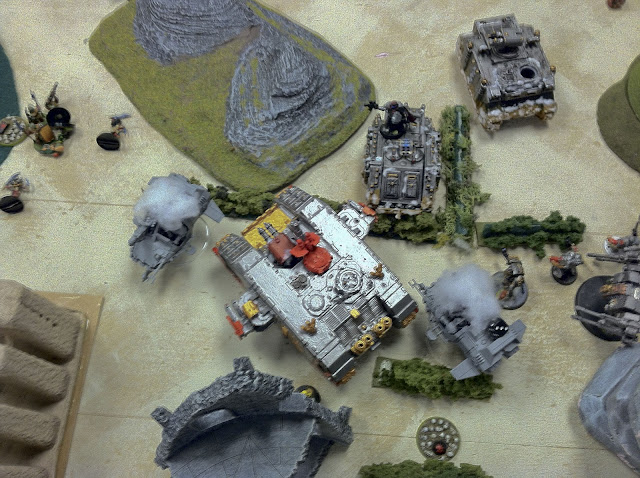 Unfortunately for me, I made a grave error on turn 3. I blocked two of the Land Raider's access points with damaged Speeders, but didn't think to move my undamaged Typhoon Speeder to block the third. As a result, the Assassins were able to get out, make a great terrain roll, and wipe out Dante's unit in assault. They then killed Dante during my turn after he failed his Hit and Run roll.

Weirdness 6: I Didn't Get To Shoot At The Assassins When They Assaulted

In Flames, you get to shoot at troops that assault you at your full rate of fire. So to have a hope of succeeding in an assault, you have to pour enough fire into the unit you're charging to pin them. Pinned units can still fire, but they only get one shot per model.

So these Assassins hop out of their Land Raider, run 13 or so inches straight at me, and then assault... and I can't do a thing!

In Flames, you don't stop after one round of combat. You just keep going back and forth until one side wins. Making Close Combat VERY bloody.

Games in Flames of War are pretty decisive. You almost never have to chase damaged units around the field to win a game. Part of that is the objective system, which gives the win on any captured objective. But the other half of that comes from the fact that you have to take company morale checks once you've lost half of your squads (platoons in Flames). The company morale check is made by your 1iC (First In Command), and if he's dead... you auto-fail and lose the game!

After Spag's Assassins killed off Dante's unit, they proceeded to kill another two Sanguinary Guard units before the game ended on turn 6. We counted up kill points, and I was still ahead by 1. But you have to win by 3 in a NOVA format game, so it went to secondary. Where Spag won it 1-0 on objectives.

There's no turn limit in Flames. You just play until one side or the other wins. Either because one player captures an objective, or the other fails a Company Morale Check. So unless you're at a timed tournament, you don't get these sorts of weird endings where everything just stops mid-action.

I have to admit that our game was closer than I had initially thought that it would be. This was my first time taking the Emo-Wing against the Grey Knights, and I'd really feared being out-assaulted by default. But the Sang Guard held up pretty well.

Spag's 3 Psyflemen Dreds were really only a concern in the early game, when he was playing peek-a-boo with my Speeders. In the late game, I really only feared getting tarpitted by them.

The Assassin death star was a problem, but it's one that I could have handled by either blocking the exits on that immobilized Land Raider or flaming them with some speeders. So it really came down to tactics in the end.

My second game was against TheGraveMind, who was running his blue-painted Blood Angels. The game was objectives/kill points/table quarters, with a Dawn of War deployment.

TGM set up much as Spag did, so I did a repeat deployment. TGM had a lot more tanks than Spag did, but less AP2 weaponry. He tangled up on the terrain and I was able to make it worse for him by wrecking tanks in key locations. Forcing him to take more terrain tests.

His big mistake was dropping his large 10-man assault unit right in front of my advance. His meltas killed a MM/HF Speeder, but I then hit him with 2 Sanguinary Squads + SangPriest and ate him without skipping a beat. After Dante and both of my other squads dropped on turn 2, his armor really started disappearing too.

The highlight of the game was Mephiston getting dog-piled by Dante and 3 units of Sanguinary Guard. Mephiston hulked-up and did 5 wounds to Dante, who got insta-killed by a single failed invulnerable save. The feather boys then took the rest of McPhisty's wounds and we called the game on turn 3. With a little more than half of TGM's units dead.

Which was very Flames-like, as in that system TGM would have been forced to take a company morale check when he lost more than half of his units. Without Mephiston, he would have automatically failed it and lost the game. Which is, I think, a better way to win than having to spend 2-4 more turns chasing down every last little model when the game is already clearly won.

Flames has spoiled me. Being so similar to 40K, it really seems miles ahead of GW's game in terms of rules refinement and tactical scope. The scale is much more appropriate to company-sized battles, and the $$$ costs are about half, which is much more reasonable. I bought an entire German Infantry platoon today (48 METAL men on 9 bases) at the store for $29.00. Honestly, I haven't seen that much metal in a blister pack since '89.

I'm really starting to feel that 40K should be re-balanced around the 1000 point mark and made into more of a skirmish-style game with a lot more terrain on the table. Something between what we have now and Necromunda. In a perfect world, GW would compete with Battlefront by releasing a new 15mm version of Epic. With detailed 4" long Land Raiders and awesome Titans that are 12" high. That would rock!
posted by SandWyrm at 10:56 PM