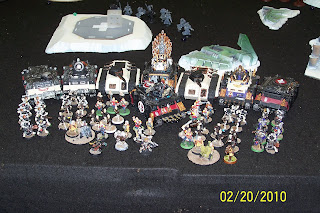 I'm concatenating all of my battle run-downs from the Blue Moon Games Tournement into one Tourney report, rather than 3 Battle reports. I forgot to take a lot of pics, but had some fun games.

also, I'm sorry it took me so long to get this up. I got busy the week after, and of course, I forgot to finish what I started.

Game 1:
So my first game ended up being against BlueMoon. I didn't want to pull a tough opponent for first game, and BlueMoon would be challenging, even without a 'top force'. BlueMoon would act as the House Army, so noone had to sit out a round.

The HQ's loaded up in the LR, with the Vanguard. Making for a big counter assault hammer. The combat squadded tac squads and scouts w/ML's hid on his objective, the other scouts infiltrated, and the tac squad assault elements were forward. Termies were combat squadded in reserve.

My Tarot actually pulled out the first turn for me, not that it helped a lot. It just would let me get some shots in earlier, and kill off the infiltrating scouts, using Shelia's 'A Word in Your ear' ability to move the scouts to 18" from an Immolator.

I advanced most of the Immos, and Chimeltas, holding them back from Blue Moon's table edge 12" unless they had moved 12" to get the 6+ protection vs assault. My plan was to Leave the platoon on my back corner, then advance all of the light armor forward. I had a Sisters squad in their rhino between a chimera and an Immo, so I could give the IG a boost to their Ld. The Cannoness would advance behind tanks until she got a good opportunity to move 12" and charge someone. If a troops transport got wrecked, their job was to advance to the nearest objective, and hunker down. I figured I could get at least 3 objectives, and contest the other two. 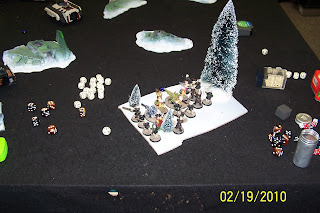 The platoon Squads hunker down in cover and hope for the best.
Blue Moon and I for the first few turns were both rolling like fiends, with a lot of hits, and a lot of armor saves made. He got a lucky shot off 1st turn, and took off my Exorcist's missile launcher, which seriously hampered my long range firepower. I had hoped to be able to kill off about 8 marines with it over the course of the game, preferably termies, or an IC. That's really the drawback to only taking one of a type of unit. No redundancy. It's much easier to hamstring an army's strategy if they have only one thing that can fill a particular role. For me, The exorcist is my long range, low AP, light armor tankbuster. It's good at it. Blue Moon also destroyed a rhino first turn, so the Hflamer/melta Sisters had to get out. 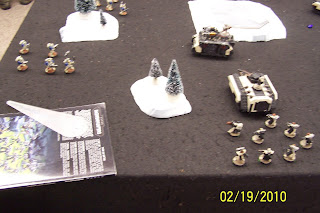 The Hflamer/melta squad slogs over to trade shots with the half tac squad.


Turn 3 finally saw the termies arrive, and they marched on the table edge to beat on my tanks. 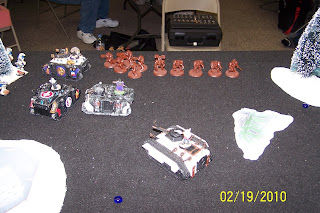 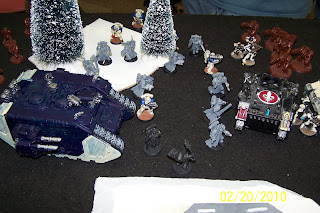 The Termies and Vanguard Vets to their jobs. Dominions are getting assulted by termies, and Celestians disembark behind their Wrecked Immolator.
My idea at this point was to try and hold 4 objectives, and contest BlueMoon's objective. I shuffled a Sisters Rhino to the upper  right corner to hold the objective near the termies, and moved the Platoon Command to intercept with meltas, then moved a Special weapons team onto the center objective, moving 12" in their chimera, and had the Sisters on foot on my bottom left objective. 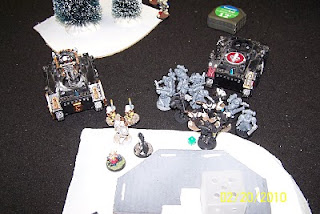 Last Chance. Celestians hold off the Vanguard, while the Inquisitor and the weaponless Exorcist make a push for the objective in front of the exorcist.
In the end, I should have played conservative. The Lower Left sisters did not kill off the tac squad, and the Termies were able to get around my Platoon command, to contest the upper right objective, and the vanguard were able to move to contest the center. On top of all that, BlueMoon was able to destroy the exorcist, contesting his home objective.

I played for a major victory, when all I really needed was a minor win. The Comp and Paint scores would raise my final score a lot. I was sleepy though, and forgot this detail. 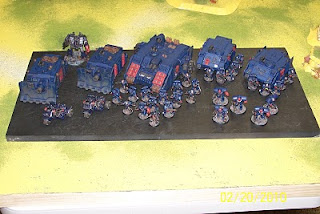 I faced Wineas in my second game. His Crimson Fists were Black Templar today. SandWyrm played Wineas for his third game. We were playing Dawn of War, Capture and Control. He had:

He won the roll, and had me go first. This is about the only time I want to go second. I wasn't too scared of this list, to be honest. I was glad it wasn't a gigantic horde of multiple Black templar squads on foot with meltas running screaming across the board. I just don't care much for fighting those lists. I also wasn't at all worried about his small tac squads in rhinos. The Attack bikes MIGHT get 1 transport each, the Vindis might get one each, but I could put pressure on them, and do a turn and burn (move 12", disembark 2", melta into side armor) and kill them easily enough. On side armor, I won't really need the melta ability. Termies would probably be easy enough for the Callidus to eat, or even better, for the cannoness to get.
Our bonus point was to kill the highest value HQ. Which is bad when you've got a Champion who MUST accept challenges. Unless I'm sleepy, and make a bad choice to go for more kills instead.
I played this game poorly. My lack of sleep was really showing in the couple of mistakes I made. 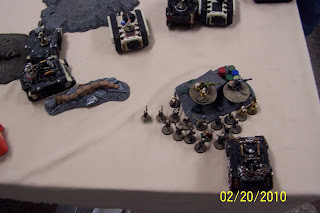 The home field after my first moves. 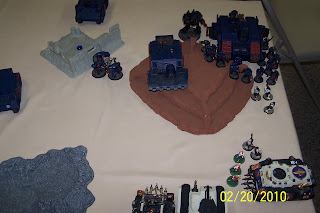 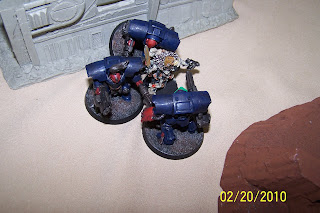 My cannoness Parties with the Termies. She eventually gets charged by the dread. I push for all the Invul saves I can, when in the end, I should have let her die, so I could shoot the dread with the advancing Celestian squad. 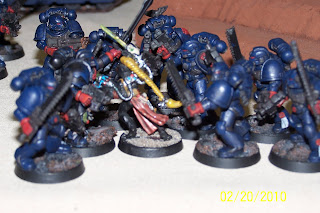 The big block of Crusaders was moving forward to get my platoon and objective, Shelia heads them off. I forget to have her kill off the Emperor's champion (the objective), she takes enough wounds to kill her off easily. She did slow down the Crusaders a bit, which helped.

The game came down to both of us contesting each other's objectives. Wineas got his big crusader squad into my platoon, but my exorcist moved in and contested the objective, and His Dread moved in to contest his objective, which I had moved onto on the other side of the board. I think perhaps larger troop squads might have helped Wineas. 5 marines get eaten by 10 Sisters. He had his 2-man squads in the backfield, one behind it's rhino, and the other on the objective.
I'm thinking now perhaps he forgot to move a Vindi in from reserve, or maybe I exploded one by the time I took pics. I don't really remember. 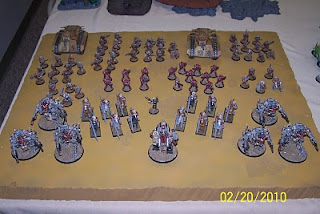 After realizing what I should have done differently in the second game, and wishing I'd had enough sleep before the tourney, I got my third matchup.

Canaan! the other WitchHunter player! =I= on =I= doesn't happen real often, so after we joked about who the 'real' heretic was, we got down to business. Canaan's list was:
HQ:
Inquisitor Lord Karamazov 205pt
Priest w/Eviscerator, Carapace armor, Bolt pistol, purity seals 76pt

The mission was Victory point based annihilation, pitched battle, with nightfight for the whole game. I would be lighting things up with my chimera spotlights, for long range support.

He kept everything but the lascannon platoon and Lord Karamozov in reserve. I was puzzled. no, really. I asked Canaan if he really wanted to do that, he reassured me he did, wanting to get the drop on me if I was close to the edge of the board. I wasn't going to let too much stuff that hadn't moved 12" near the edge. His reserves were slow and piecemeal. He knew if everything was on the table, I'd have divided and conquered fairly easily, having enough anti-tank to deal with the 2 squadrons of stomping doom.

His orbital strike actually did kill a rhino, which I was surprised at. It was a good scatter, and even splash damage with the melta rule sucks on rear armor.

As it was, that was exactly what I still did. With his stuff coming on a bit at a time, I could reorganize, and hit where I needed. He started with the lascannon sniper rifle combined platoon on the board,and their platoon command. They got shot off the board, and Shelia made sure to wipe up the command squad. Shelia got run down by a unit of Rough riders, who in turn got eaten by flamers.

On the other side of the board, his IST's moved on, his Callidus tried to dislodge my platoon, only to get spanked. The IST's and platoon  were beaten back badly by my forces.

We both needed to get home, and I had already killed off most of Canaan's troops, so we hastily got through Turn 5 and left it at a Major victory, since comp scores would ensure I had max points anyway.

I felt bad, I like this force, and it looks good, but it didn't function like it should have. I think starting everything on the board might have been better for Canaan.