A Little Color Theory - Part I 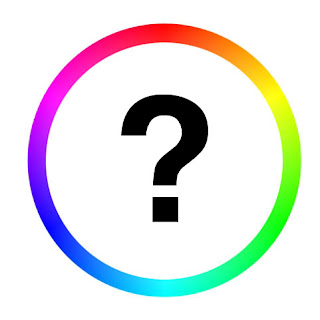 After all the comp discussion last week, I feel like relaxing a bit. So I'm going to put on my art teacher hat and talk about one of my favorite subjects: Color!
Now you might think: "What is there to learn?" But in fact color is a huge subject, and learning a bit about it can have a very positive impact on your miniature painting choices. So I'm going to do a series of posts on what color is, how to mix it, and how to choose effective color schemes for your minis.
First off...


In Reality, There Are No Primary Colors
Yes, I know, that's heresy. But in practical terms it's true. Consider the traditional colors, as listed by Issac Newton when he first looked through his prism way back in 1665.

He listed seven colors total, which traditionally trained artists still swear by. But that's just 7 arbitrary points on what in reality is a continuous spectrum of possible colors within the range of visible light. With an infinite number of possible points you could choose from.

What's that color between the blue and the green? Why it's Cyan (or Turquoise), which Newton never named, but exists nontheless. And what about Magenta (Red-Purple)? You won't see it through a prism, but it exists too. 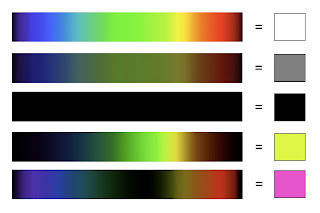 Here's some examples of how we see various shades and colors as light is reflected off of the surfaces of the objects around us. When we see the entire spectrum at once, we get white. If the whole spectrum diminishes in brightness equally, we get gray or black. If one part of the spectrum is brighter than another, we get a specific Hue in the red to blue range. And as for Magenta, it's a combination color made from seeing two parts of the spectrum (Red and Violet) at once. 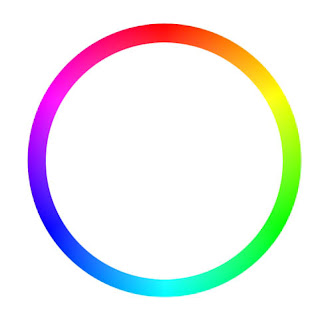 When we combine the visible spectrum with the colors made by it's ends overlapping, we get a continuous circle of all the visible colors, as shown above. If we then pick out the traditional colors, you can see how fixated we are on certain portions of the spectrum to the exclusion of others, as shown below. 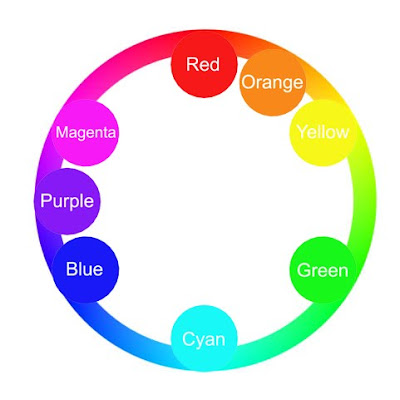 Now we can discuss the so-called "Primary Colors". Meaning the 3 or so colors that cannot be mixed using other colors, and can, in theory be used to mix every other color in the color circle.

In Newton's day, this was determined to be the colors Red, Yellow, and Blue. Which you'll still hear about in High School art classes. Problem is, while these primaries can be mixed to create pleasing flesh tones, there's colors like Cyan and Magenta that just cannot be mixed this way.

You can try this yourself with some Citadel Paints. See if you can create Blazing Orange using just Blood Red and Sunburst Yellow. Or Ice Blue using Ultramarine Blue and Yellow. The Orange will be close, although noticeably less intense than the bottled stuff. But your Ice Blue will end up looking more like Dark Angels Green instead of a Cyan-ish color.

Truth is, you can't mix the entire spectrum from those 3 colors. Which is why printers use Cyan, Magenta, and Yellow instead. These produce a wider range of possible colors, which makes them very useful for printing. But even they can't reproduce all the colors that your computer monitor can. The issue is one of pigmentation.

Every paint is made up of a base medium (Such as the Acrylic used in most miniature paints.) and a small amount of colorant, called pigment. In the olden days, these pigments could be bits of minerals or even crushed bug parts. But these days most are made using chemicals extracted from petrolium.

Every point on the color circle (called a Hue) has a pigment found somewhere that can be used to get the most intense possible version of that Hue (more intense even than a computer monitor can show). But professional printers and other commercial imaging businesses don't want to reproduce every possible Hue. Just a reasonable subset that gives the biggest bang for the buck. It's far cheaper to print using 3 or 4 inks than 6, 12, or 18. So that's why everyone in the industry at large thinks in terms of color primaries. because it's cheaper/easier than the alternatives.

Computer monitors have this problem too, but the possible range is wider than with print due to the technologies used. If you visit say, a national art gallery and see some original works by Dali, Monet, or other great artists of the past, you will be blown away by the colors they used that printed books and computer images can't come close to reproducing. Because they only limited themselves to the pigments available instead of trying to mix everything using the so-called primary colors.

Lessons To Take Away

Don't Cheap Out And Only Buy Just The "Primary Colors".

You may think that you're being smart and saving money by only purchasing Red, Yellow, Blue, White, and Black. But in reality you can't mix every color you need this way. Not by a long shot.


When Buying Your Paint, Explore Other Options

Citadel makes a good range of hues, but these do tend to cluster around the named colors from the image above, which are based on the traditional fine-art hues that largely ignore Cyan and Magenta. If you go to an art supply store (a real hard-core art store and not a hobby or craft store), you will find many more choices of acrylic colors available. Don't be afraid of mixing some of these with your Citadel paints to get some choices that you wouldn't have otherwise.


The neutral tones can all be mixed using the pure hues, plus black and white.
More on this in a later article. But if you're going to cheap-out, do it by not buying browns and other neutral colors. These can be easily mixed using a selection of 6-8 pure hues, plus white and black.

And to mix your other tones:

And there you go. You can mix almost any color you need with those 10 bottles.


Make Sure Your Painting Table Is Neutrally Lit

That way, you won't paint something that looks great under an incandescent bulb, but flat and lifeless under a fluorescent fixture, and vice-versa.

To Be Continued...
In my next color article, I'll discuss the HSV color system and how to mix various shades like browns and khakis using just the pure hues, plus white and black.