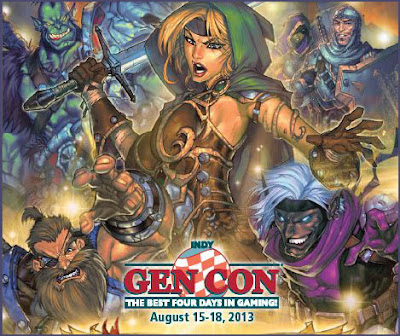 
Once again, Indianapolis will be invaded by hordes of dice-bag and rulebook toting folks.

I shall be one amongst the horde again. With such a large event in my own backyard (like 10 blocks from where I work), how can I resist? (I could, my saves vs. spending money are pretty good)

I'm of course going as a GM. I'll be running Flames of War stuff again this year with Able Kompanie.

We're presenting two scenarios this year:
Stalingrad (and it's massive 8ft city table of DOOM!)
Vietnam (Run through the jungle) 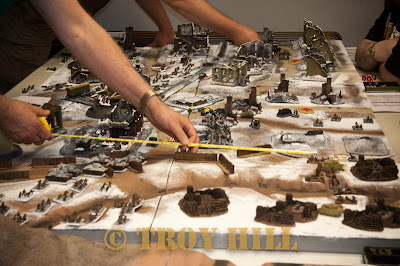 I'll be running Stalingrad for both slots Saturday. I think there might even be a few slots open for it. It's a mid-war Soviet vs. German mostly infantry slugfest. We include more objectives, and it's mostly for people wanting to learn FoW. Just stay out of the buildings if a Bunker Buster is around... 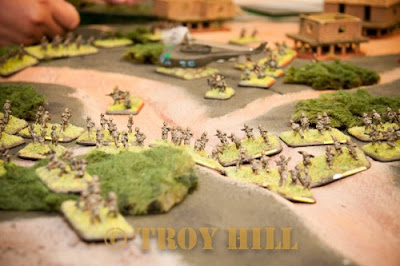 I helped play the Vietnam scenario this past Sunday with a few of the other guys who will be running it. Troy does a quick recap over on his blog: Dice and Flames
The scenario can get pretty rough for the US, with them having to defend the LZ against the oncoming People's Army of Vietnam forces breathing down their necks. If the Airmobile infantry can hold out until the Armored Cav and heavy tanks make it, they're good to go... but it's a rough road to get there.

In addition to the Two scenarios, Able Kompanie is running three tournaments:
Thursday:
Early War 1000pt (on a 4'x4' board)

It looks like there will be three groups running 40K and Fantasy games this year. 7 40K events, 1 Fantasy, and an Apoc game. Last year there was only the Apocalypse game...

We'll also see if GW labels their booth this year. I found it difficult to find their booth last year, as is was pretty much a pile of cardboard boxes and cash registers. Unless you knew it was there, and were looking just for the GW booth, you probably would have missed it.


so if any of you are going to Gencon, stop by the Able Kompanie FoW events in the miniatures hall and say 'hi'.
I'll be hanging out there.
oh yeah, TheNeverthere, e-mail me if you want a ride. I'll be there ALL DAY Thursday, Friday, and Saturday.


oh yeah, I almost forgot: IUPUI (that place I work) will have a group at Gencon also:
the Dept. of Informatics

I might have to take a few Grad classes from the Gaming informatics guys, since I am considering Bioinformatics (I want a job if I get the degree).
posted by Farmpunk at 1:54 PM