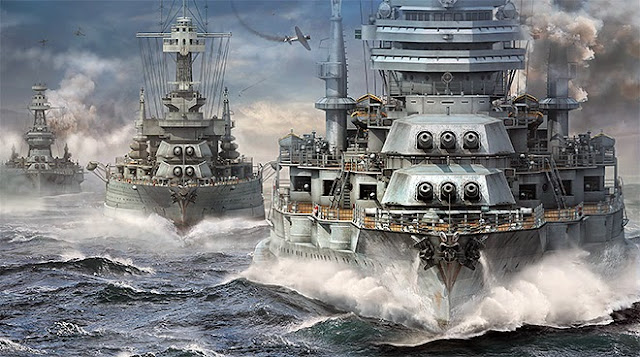 In no particular order, here are my impressions (both good and bad) about the latest WoWS update.

It's nice to have the ping and FPS counters back in the upper-let corner of the screen, that's definitely an improvement. But after this update the game is considerably more laggy that it was before. The little lag tag next to my (decently good) ping rate flashes about once every 2 seconds, and there are many times during a game, particularly when tracking a fast-moving destroyer, that the other ship's position will suddenly pop forward, then back, then forward again.

Maybe this is just a server-side problem? Don't know, but it still needs to be fixed.


2) The New Mexico Is Pretty Much The American WarSpite

The American Battleship line finally got added. Which means that EVERYONE now wants to play their new BBs, and you'll spend forever in the queue unless you break down and play a cruiser, destroyer, or carrier.

I used free XP to skip up to the New Mexico at tier VI, because grinding through the earlier models didn't interest me much. But while the New Mexico has very decent firepower and protection, you'll need to hug terrain a lot, because the Japanese BB's all have a 2-4 km range advantage on you.

The thing also banks A LOT on hard turns, so if you're close to someone else, you're pretty much giving them free direct-fire shots at your top armor.

Just got the Colorado, and it also has this problem. Longer-ranged guns though, so that's a plus.

Looking forward to the South Dakota. Saw my first Iowa in a game last night. :)

Wargaming seems to have fiddled with their movement modeling a bit. All ships now turn faster, and accelerate more quickly.

But... If you're in a destroyer like the Sims, then it takes you from turning like a skateboard to turning more like a snowboard. There's a LOT more sideways movement. Which would be better if the graphics at least gave you a sideways wake, because it just looks goofy otherwise.


4) Shells/Armor Got Better... And Worse

Top-Armor seems to work like it should now, and that's good. But it's also so strong that you'll almost never want to use AP rounds, which you can see visibly ricochet off of thickly armored turrets and citadels.

HE has thus become the standard, while AP is pretty much a gamble. Because if you don't hit bare top-deck, you're not going to do nearly as much damage.

This does make Battleships MUCH more fearsome compared to Cruisers (which is good). Whereas my Atlanta and Cleveland fire-hoses used to chew up BBs left and right, I have to be much more careful now. Get too close and all my direct-fire will just bounce off.

I wasn't really sure that Carriers were worth playing before, but now you have even less control over what squadron combinations you can take.

But you do get a 2Fighter-2Bomber combo that's useless against everything but Carriers. Oh boy!

Bombers did get slightly better, and American fighters are awesome (which I'm not sure is fair to the Japanese Zero), but for me my Lexington is no longer as much fun to play.

I tried out the aim-assist mod for a couple of days before the update killed it, and I really think that it should be a standard feature (or a feature that WWII-era ships have). Because in reality WWII ships (and maybe even WWI ships) DID have simple mechanical computers that provided a very good idea of where they should fire to hit a target.

Do you think the Bismark hit the Hood and sunk her at 20 miles away by luck? Hell no, they had a targeting system that got them close, and the gunnery officers would then adjust it to hit specific parts of the enemy ship. I've even seen the computer they used on the (Iowa class) Alabama in person. It wasn't updated in the 80's refit because it still worked perfectly well. Original 1940's knobs and everything.

What aim-assist does is put a little x or circle at the point where you should fire to hit the target at its current course and speed. BUT... while this makes aiming easier, it doesn't mean that you hit the target automatically.

Why? Because the enemy ship could change course and/or speed in the time it takes your shells to travel to them. Even with Aim-Assist, dodging Destroyers are still almost un-hittable, and even cruisers can weave around at long range. Plus it's still very easy to aim a little too high or low, causing your shots to hit the water in front of or behind the target. So you have to guess where around the little x to shoot.

With aim-assist, you're also not aiming right at the circle most of the time. Instead you're trying to lead or tail it a bit (with a slight up/down elevation change) to hit specific turrets or the citadel. Which makes it much easier to miss if the target makes a slight course or speed change.

With the fixing of armor in the current update, missing a spot of open deck with an armor-piercing shell would mean the difference between a few thousand in damage versus a useless ricochet. Making  it an interesting gamble to try and hit something specific.


And Then There Was This Surprise...

Lots of people have snarked at Wargaming for not blocking aim-assist (the current build broke it, but it will be back with their blessing soon), but there's a reason that they don't think it matters much.

When I first tried it out (in a Cleveland of course), I was the scourge of the seas. My hit rate went up about 40%, and everyone in the match was complaining about the mod and accusing everyone else of using it.

But then, after about 3 games, I was no longer getting matched up against those same players. Instead, I found myself facing higher-tier opponents who knew how to dodge and weave, and who never, not once, complained about aim-assist, or even mentioned it. My hit rate went back down to about what it was before.

Which means that Matchmaker noticed my increased hit-rate and automatically adjusted my match-ups to compensate for my increase in "skill".

They deserve some praise for that, I think.  I'd never have noticed it otherwise. :)

Did you know that in torpedo-mode you can hit the X key to have the game show you EXACTLY where to fire your torps to hit the target at their current course and speed? Let's just do the same for main batteries and be done with it. Learning to guess your lead (even with the ALT key) is, to me, akin to having to guess ranges in 40K or WHFB. It's an artificial "skill" that puts one more barrier between new players and vets.

Plus, this mod is not going to die. So making it standard would put everyone on the same footing.

Email ThisBlogThis!Share to TwitterShare to FacebookShare to Pinterest
Labels: Sandwyrm, World of Warships