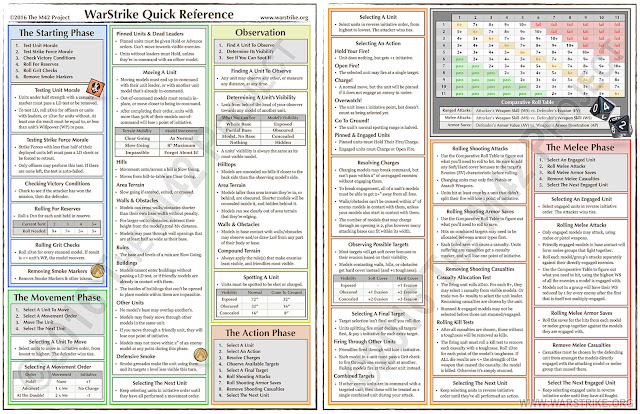 It's been a month of craziness, what with Cub Scout camps, a family wedding, and my 3rd Sinus surgery just this past week. But I did get to meet (thanks to Farmpunk) a cool guy named Stephen McCormick who's just moved to Indy, and who's already started a miniature game company with some of his friends from various parts of Indiana and Illinois.

They have a Sci-Fi skirmish game called "Seer" that's close to beginning its Kickstarter, and we're in early talks about merging their efforts and ours into a single company with a shared fictional universe between the two games.

To that end, I needed to run a demo game for one of their designers yesterday at NerdCon in Robinson, IL (I'll be running more in the next few weeks). So I worked up the quick reference sheet above, and some test unit stats that I'll post next.

Working up this Quick Reference took 2 days, and as I attempted to do a complete overview of the game on just two pages, I found myself making major and minor changes to the game as whole to reduce complexity.

The high points are:

The demo went very well, BTW, but I'll get into that later.