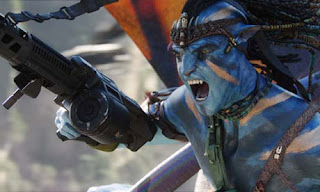 Despite the annoying marketing hype, I went and saw Avatar (in 3D) today. (more...)

What did I expect? Well, the reviews were generally good. Some knocked Cameron for "sloppy" dialog (huh?), the eco-ish "Dancing with Wolves" story (more like Aliens meets Princess Mononoke), or the subtle digs at the war on terror (I didn't mind). Some even said the story was poorly paced (rubbish).

All that matters is this:

For 2.5 hours I was completely transported to an alien world. The sheer depth and detail to everything I saw was utterly amazing, from the way in which the human mechs and troops disembarked from their transports, to the subtle behaviors of all the different wildlife you see in the film. I feel like I could spend days just going through the film shot by shot and thinking about the sheer amount of thought that went into each and every little thing.

But what I appreciated the most was that Cameron took his bleeping time and told the story properly. After the grand mal seizure that was Transformers: ROTF, this was really refreshing.