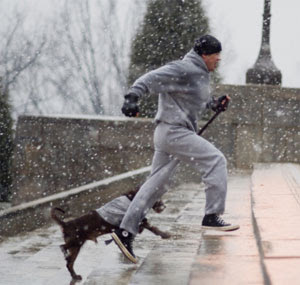 "Yo, Adrian!!"
So after almost three hours of Blogger hating me, (main frustration here), I'm finally ready to post. With all of the talk about the Nova open, and other big events that are/will happen, I've been thinking hard about my involvement with tournaments. Couple with the talks about an Indy GT, I've had some food for thought to say the least. For the past few years, I've joined in some tournaments that are hosted at the Game preserver south. Well, I'm working on a new army, with new tactics, and I'd honestly like to say I'm getting better at 40k. So I've been looking to expand my horizon of opponents and gaming locations.

So I've requested the weekend off in a few weeks, and I'm driving down to bloomington for a tournament at that Game preserve. It is on the 18th I believe. I'm also taking it as a chance to visit my friends down at IU. Weinas just played at their past tournament, had a lot of fun, and rumor has it even won. I couldn't get off work to go to that one, but it seems like there are a lot of great players down there. So I plan on having some great games, followed by visiting friends. Then I'll probably make it back up for sunday night at the LGS, if anyone is daring to test themselves against my finely tuned wits.

The following weekend is the Doubles tournament I plan on going to. Again I was not able to make it to the past tournaments of this group, but I'm changing my ways and have this date requested off work as well. I'm looking forward to seeing some friendly faces, and seeing them look in amazement to my army.

Oh yes, that is right, I've been working on them.
I have three large models being painted, and I just got 10 assault marines, 5 terminators and 2 Dreadnaughts to the stage I call Ready. Ready means they are assembled, based, and primed. I also got my Five man Ravener squad I've been working on for a long time (pre-5th edition) to the Ready stage.

And it is a good thing I've been working on them, because for all of these tournaments and plans I've made, I cannot seem to get a game in casually to practice. Tuesdays and sundays are 40k days at the Game preserve South, and are usually my easy going days (usually). On Tuesdays I'm either busy from school or no one shows up with an army, on Sundays...oh boy. This Sunday I was in bed sick, the one before then I had to work a 12 hour shift, the one before that I had plans with a friend of the female variety. This coming up Sunday I'm actually scheduled for the closing night, which is new to me. Many times I've worked day and had to stay late into the night, but never have I been actually scheduled for it. Which means neither Hell nor high water will stop me from getting a game in this coming tuesday. I may or may not have to disregard school work for a day and find someone with an army.
Hope you have enjoyed my Cross-referencing and I'll keep you posted on my armies progress and any battle reports I actually manage.

Soon my plan shall be in motion, and nothing can stop it! Mwahahaha! Unlimited power!
posted by TheGraveMind at 2:21 AM