I attended a tournament at the Game Preserve in Bloomington (home of Indiana University for the non-hoosier readers) this past weekend.  There were only around 13 players, and nearly half of those were from the Muncie area (home of Ball State University).  Among them were members of the Rites of Battle blog.


It was nice to put faces to screen-names with a lot of guys whose articles I've read in the past.  This tournament felt like a very cross-community event.  Sadly, I was the only Indianapolis representative there.

Here's the army I took (pictured above):

Most of the armies were not fully painted.  This was a bit disappointing, but I liked that it helped my odds since painting scores would be added into the overall results.  The armies that were painted looked good (I think I placed 2nd in painting out of 3), but the units that were painted looked very promising.  There was a particular Space Wolf player that had some great-looking Thunderwolf Cav conversions based on Chaos Knight Cavalry that were painted to a very high standard.  I was irresponsible, and didn't get as many pictures as I should have.

Game 1 was against Jacob, a Blood Ravens player who was using the Space Wolves codex.  He brought Njal, 4 full Grey Hunter units, and 2 Long Fangs with some Wolf Guard pack leaders sprinkled in for flavoring.  The mission was a modified Seize Ground, where you earn points for every turn that you hold an objective.  His Long Fangs holed up in cover, and his packs of Grey Hunters advanced.  over 40 marines with special characters and Wolf Guard leaders were bearing down on me, and my dice were completely failing me.  Every time I would roll to hit, I would fail to wound.  Every time I would wound, he would make his save.  Luckily for me, Jacob's dice also failed.  Both Long Fangs packs killed virtually nothing the entire game, and his rolls to hit and to wound were about as good as mine.  The game turned into a hilarious bout to see who could wear the other down first.  In the end, my 15-man Crusader Squad led by the Emperor's Champion pushed a squad of Grey Hunters off an objective, while my Terminators deep struck in and took out another squad that he left unsupported.  This gave me 2 objectives to none for the last 3 turns of the game.  This game would also be the most fun.  Jacob was a great opponent, and we had a lot of laughs in spite of how terrible both of our armies were performing.  It's been a long time since there were that many models left on the board on both sides. 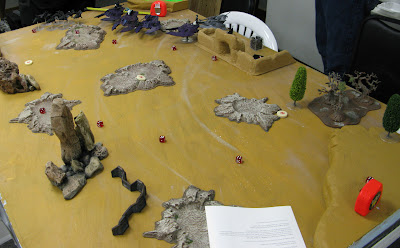 Game 2 was against Heretic, from Rites of Battle.  He was using a mech Eldar list with 2 dire avengers, 2 fire dragons, 4 wave serpents, pathfinders, a fire prism, and a jetbike seer council.  The mission was another modified seize ground.  The objectives were laid out diagonally across the board with diagonal deployment. I was expecting the usual Eldar shenanigans, and I got exactly that.  I've played mech Eldar a number of times, and have learned that they don't pack a whole lot of punch, but are very resilient, and are wicked fast.  I was very worried about the Fire Dragons, and each Wave Serpent packed bright lances on top.  If I could get into position, I knew I could tie the game.  I doubted that I could do better than that. 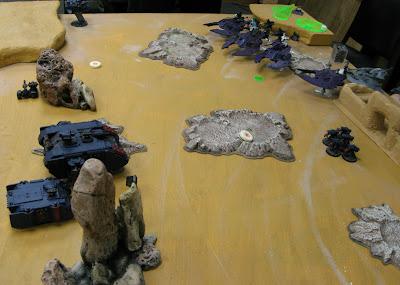 Heretic was a good MechEldar player, and played to their strengths.  I won the roll-off, and made him go first in order to give myself the last turn to respond to his late-game push.  He zipped around the board for a few turns, and positioned himself to jump on the objectives at the last moment.  Both of us knew this was coming, it was just a matter of whether or not I could immobilize any of his vehicles beforehand or push him off once he contested an objective. 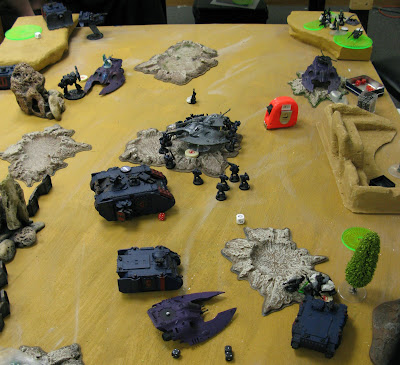 I could not.  He jumped on the objectives, and I counter-charged with my entire army.  It wasn't enough.  All 3 objective sat contested at the end of the game.  There were many instances where a single die roll would have made the difference and won me the game, but such is the way of the Eldar.  They are tricksy and false. 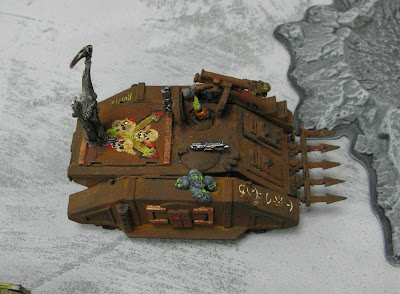 My third game was against Meric, a veteran gamer with a greatly-converted and painted Death Guard army.  Our mission was victory points with a pitched battle deployment.  I once again won the roll-off and let my opponent go first.  Meric had 3 squads of Plague Marines in Rhinos with a Sorcerer and Lord sprinkled in for flavor, backed up by a Defiler, Predator Annihilator, and the biggest summoned Daemon squad I've seen in a long time (around 12-15 daemons). 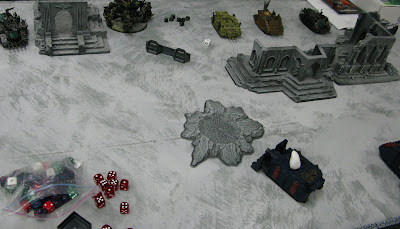 There was a large ruin separating the two halves of the table, but you could see from one side to the other.  I set up my Land Raider, both Vindicators, and Dreadnought, reserving everything else.  My lighter units will typically deploy in reserve in kill point or victory point games to avoid giving easy points to my opponent.  My Dreadnought traded shots with his Predator for a couple of turns, neither doing anything to the other, and my Vindicators lobbed shots through the ruins at his units in Rhinos, doing practically nothing.  My Terminators then deep struck in and destroyed his Predator with their dual tank-hunting assault cannons.  His Rhino with Lord and meltagun-armed squad pushed forward into the ruins, targeting my Land Raider.  However, my opponent misjudged his distance and fell just shy of 6" from my tank.  Doing no damage, this left a single squad standing in front of two Vindicators and a Land Raider Crusader.  These vehicles let loose with all the firepower they could muster and reduced the squad to 2 men (the Champion and his Lord).  This was also the turn that my Terminators took out the Defiler as well, leaving my opponent with no ranged anti-tank units. 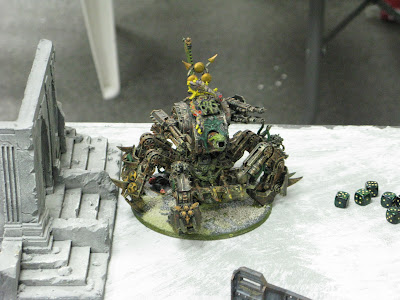 Wishing to go out in a blaze of glory, Meric charged forward with his two remaining Rhinos and wiped out my Terminators with 4 plasma guns and 2 plasma pistols (none of which overheated the entire game).  His daemons came down and jumped on a lone attack bike, which was able to hold the daemons at bay long enough for the other attack bike to come and join the combat.  These two units whittled each other down over the course of  5 rounds of combat, until he eventually came out ahead with only 2 daemons remaining.  Our forces faced off, and although resilient, his Plague Marines could not withstand the tremendous number of shots that I could put down.  This was my most drastic victory of the day.

I believe that I was pretty close in battle points for the day, but my painting score was enough to put me in first place overall.

The tournament was a lot of fun and I look forward to the next time I can make it down to play in another.
posted by Wienas at 6:00 AM