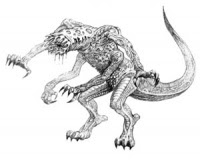 So 6th edition changes have taken a bit of getting used to, but armies adapt. For Tyranids, Hiveguard used to be the staple of the elite slot. Now with the decline of mech that is changing. I've been replacing my hiveguard units with ymgarl squads. They are the new amazing unit this edition in my opinion. I want to talk about how I've been using them.

I started off using a single 10 man squad, and have progressed to using two full squads. Now that is a full chunk of 460 points, but they have generally been well worth it. The reasons they are worth it is as follows.
So they come in, deploy, move out and then assault, all in one turn skipping getting shot at for a full enemies turn first. They also attack first, so the only thing they really have to worry about is overwatch. Ah, but they can also Alter form each round. Bolter rounds (or equivalent) coming at them? Take +T and be T5 with a 4+ against them. This also works when you have to assault through cover and strike last.

If they have high powered shots, heavy flamer or something of that end, then take +A to mitigate any losses you might take. That's 4 attacks on the charge. This is also a viable option if you need to multi-assault to keep a bonus attack.

If they are attacking Vehicles, which can easily be a good idea if they come up in the back field then +S is the best choice. This makes 5s glance most vehicles and 6's even more powerful. This can be good against walkers when needed. While it isn't the best idea, it is better then getting other units stuck in and dead. Now hitting all vehicles on 3+ makes them that much better as well.

The real trick to making Ymgarl work is to pick the proper spot with them and having good support elements.

Using their Dormant special rule, ymgarl can enter play from reserves deployed into a piece of area terrain (which with 6th is now more common and better defined). This piece of terrain is chosen after deployment, so wait to see where your opponent puts his army. This allows you to either attack the weaker side, or to focus and break his main force.

Now the obvious choice would to just pick his back field terrain piece, trying to hit his heavy weapon squad and call it a day. But we've entered into the realm of mind games, so let's play some mental warfare. First lets analyze what we are up against. Are they a midfield/close combat army? Then they may move out of their deployment zone and leave you in the open. Are they a pure shooting force? Then they may bunker up and not give you a spot to deploy, destroying your squad.

Then there are also the options of how you want to play the game, are you going to just use brute force, skirt the army picking off weakest units, feint to one side, double feint? These are more determined by your supporting units, but all things that should be considered. These are also all things your opponent should be worrying about, and fear is a powerful weapon.

If your opponent thought you picked the obvious choice, then he might hold back units to defend or screen, giving you more room to take midfield with gaunts. Or he might abandon that location together, forcing him closer and more exposed to the rest of your army. 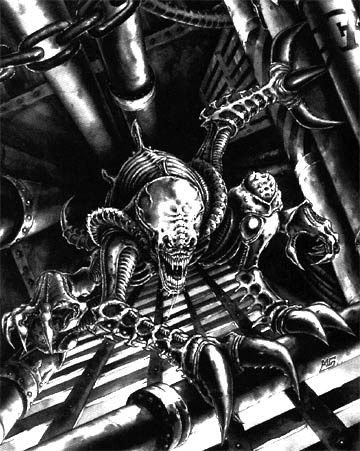 No matter what, pick a spot that will be hard to fully block off, and that will let them come in and assault the round they come in. Since I generally run a Hive tyrant with hive commander for the +1 reserves, I often get all of my reserves Turn 2, and there are plenty of choices to assault. Using two units, you can spread them out to tie up large portions of their army to keep them from shooting, or to push one side as hard as you can.

They are one of the few units in the game that can assault the turn they come in. This mixed with their Alter Form rule and hitting vehicles on a 3+ at worst, makes them a great unit. Though they a bit on the pricey side (as most of our army is) they will almost always pull their weight.

How have other Tyranid players changed to adapt to 6th? Any luck using more close combat? or are Hiveguard still needed in your area?
posted by TheGraveMind at 11:50 AM