3D Printing Is Now Ready To Compete In 28mm 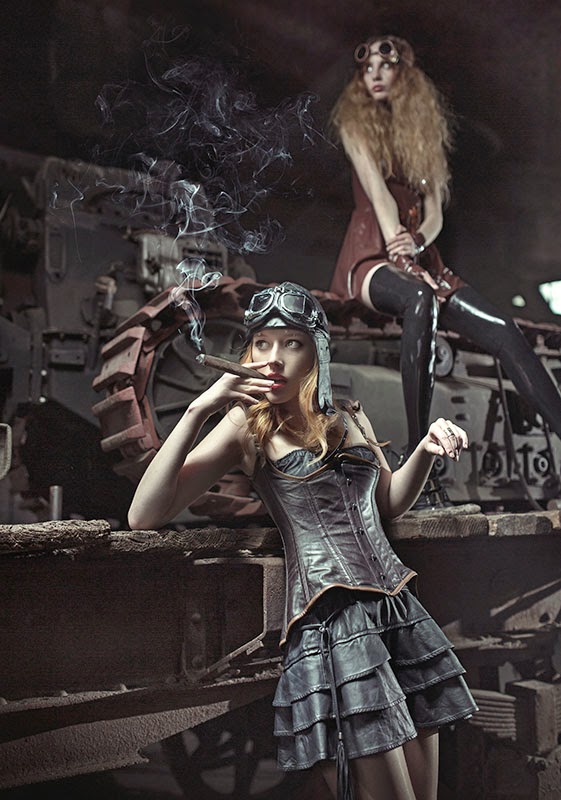 I've been talking about 3D printing for a long time now, and like most everyone, I'd been wondering when we'd finally reach the point where a 28mm 3D printed mini would be indistinguishable from an injection-molded plastic or metal mini.

Well... That time has now arrived. Not on the home printers, not yet. But in this post I'm going to show you what the high-end printers are now capable of. With some 40K/Necromunda compatible prints from Shapeways that will blow you away.

After talking about the iBox Nano several weeks back, I found myself browsing through the catalog over at the 3D printing service Shapeways.


When what did I see, but a rather nice set of 40K-ish looking minis by Gang War Miniatures. This Female Miner Gang is obviously intended to work with Necromunda, and maybe (in a pinch) as Imperial Guard figures for 40K.

Depending on which single-pose GW kits you compare that to, it's either a steal, or overpriced. 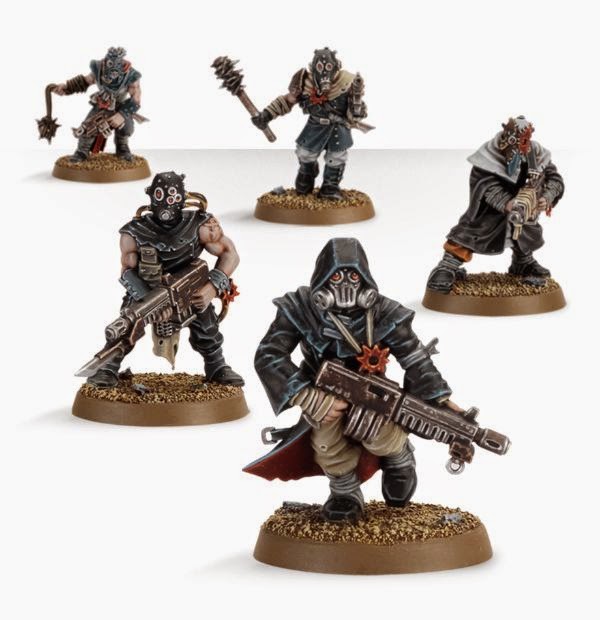 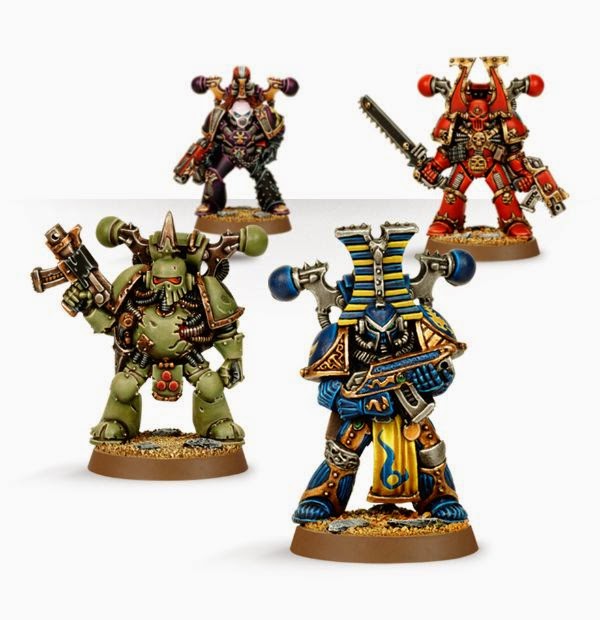 On the ridiculous high-end, GW is selling resin casts of 4 old 'Traitors of Chaos' for $37. While on the ultra-reasonable low-end, you can buy 5 of the new Dark Vengeance Chaos Cultists for just $10.

We won't talk about their Sisters of Battle models. :)

I think though, that you can at least say that the 3D printed Miner Gang is broadly competitive with GW's current offerings.

Shapeways doesn't warehouse prints. When you order something from them, your purchases go into the production que. When your turn comes, your prints are made and then shipped out to you. So you're not going to be able to get something a few days after ordering like you would with GW or Amazon. You're at the mercy of the que.

I ordered the models on December 3rd, and the order page said that the models would arrive around the 20th - just in time for Christmas. As it turned out though, the models didn't ship until the 21st, and didn't actually arrive at my door until the 26th – just as I was leaving town to go see family. I know it's the holidays and all, but this slip was disappointing. 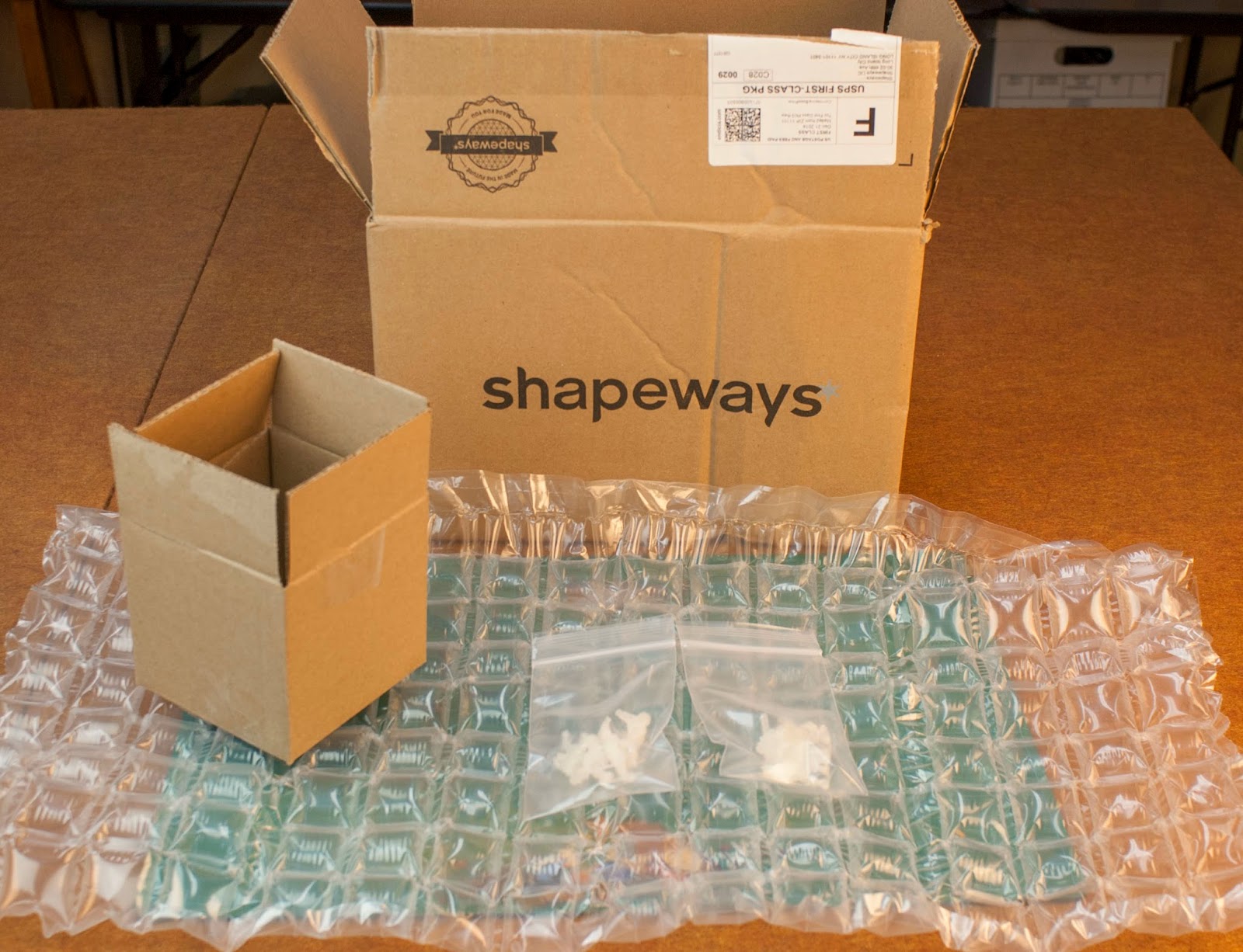 More strange though was the packaging. They double-boxed the order. Why? The small box with a little bit of bubble-wrap would have been more than sufficient to protect everything. 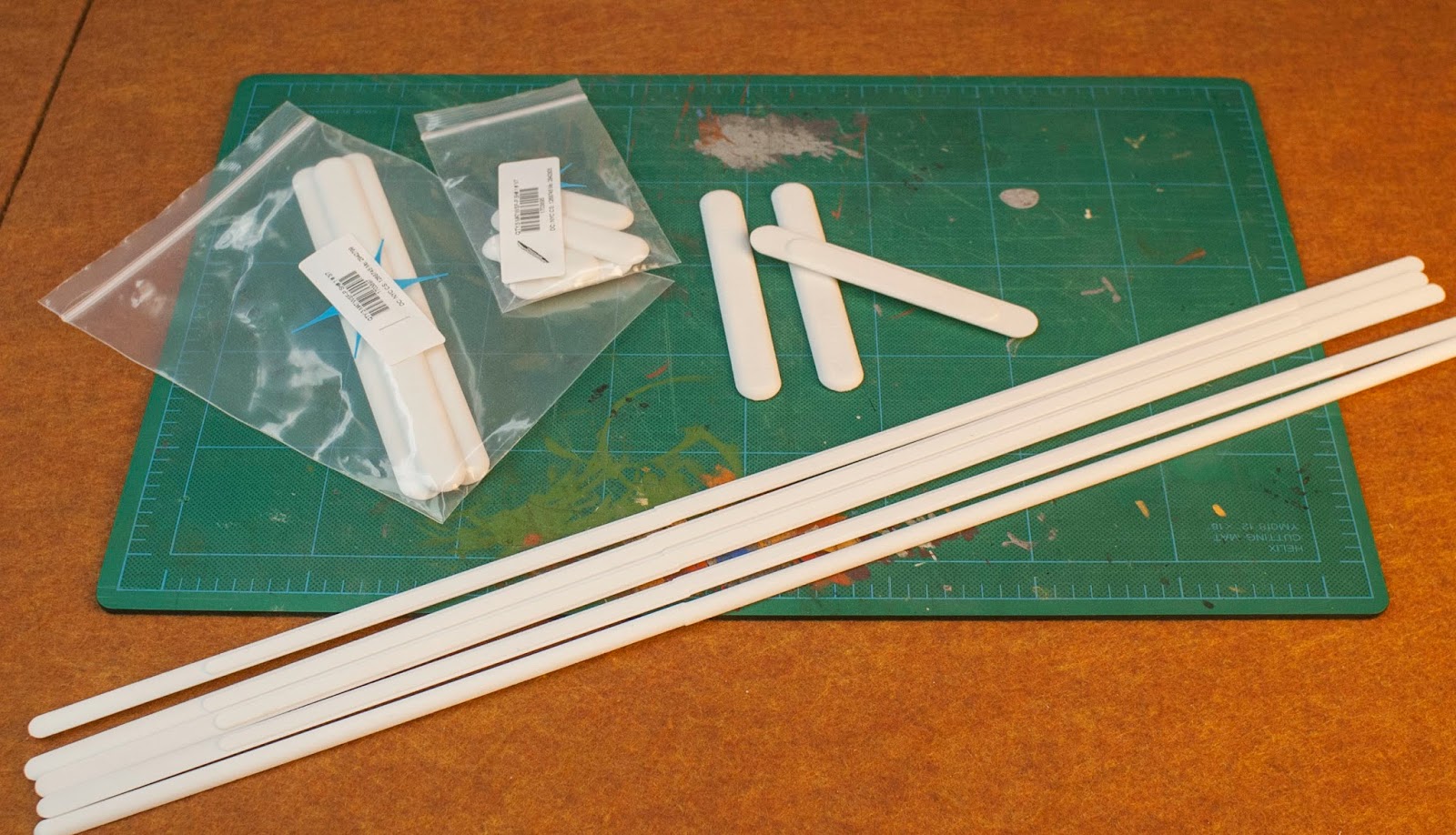 Stranger still was the 2nd box that came from Shapeways. It was huge (2 foot by 2 foot), and contained an identical packing slip to the one from the box my actual order came in. But which contained 4 different lengths of what look like tongue depressors.

Part of me imagines some intensive care unit somewhere missing its 2' long tongue depressors for examining Ebola patients at a distance. But I really don't know what the heck these things could possibly be used for. Or why they'd have to be 3D printed.

Oh well... Shapeways obviously has issues with their scheduling and shipping accuracy. GW has a good advantage here for now. 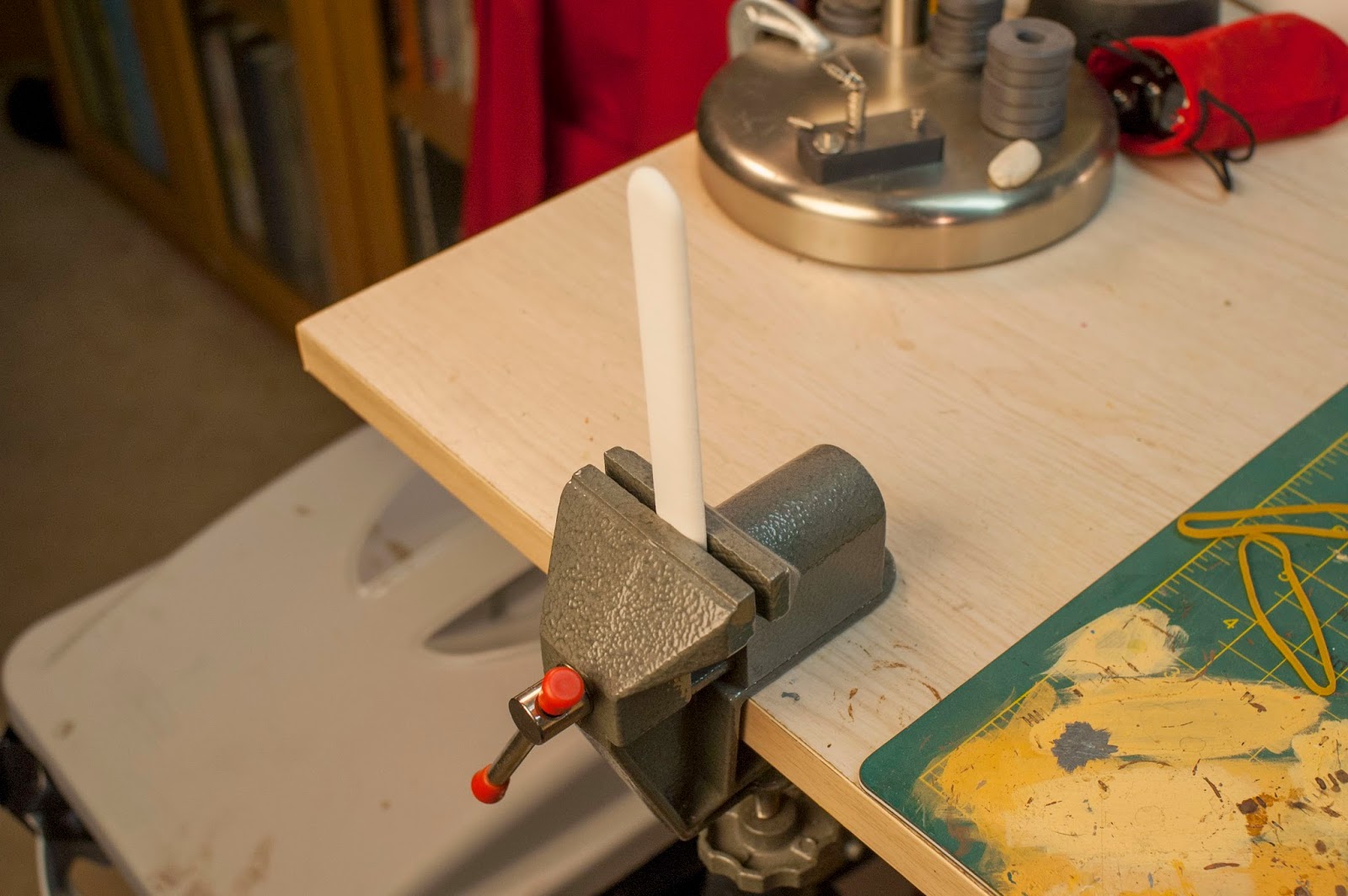 The 'tongue depressors' did give me a chance to test out the strength of Shapeways' standard Nylon print material though. So I put one in a vice and bent it. 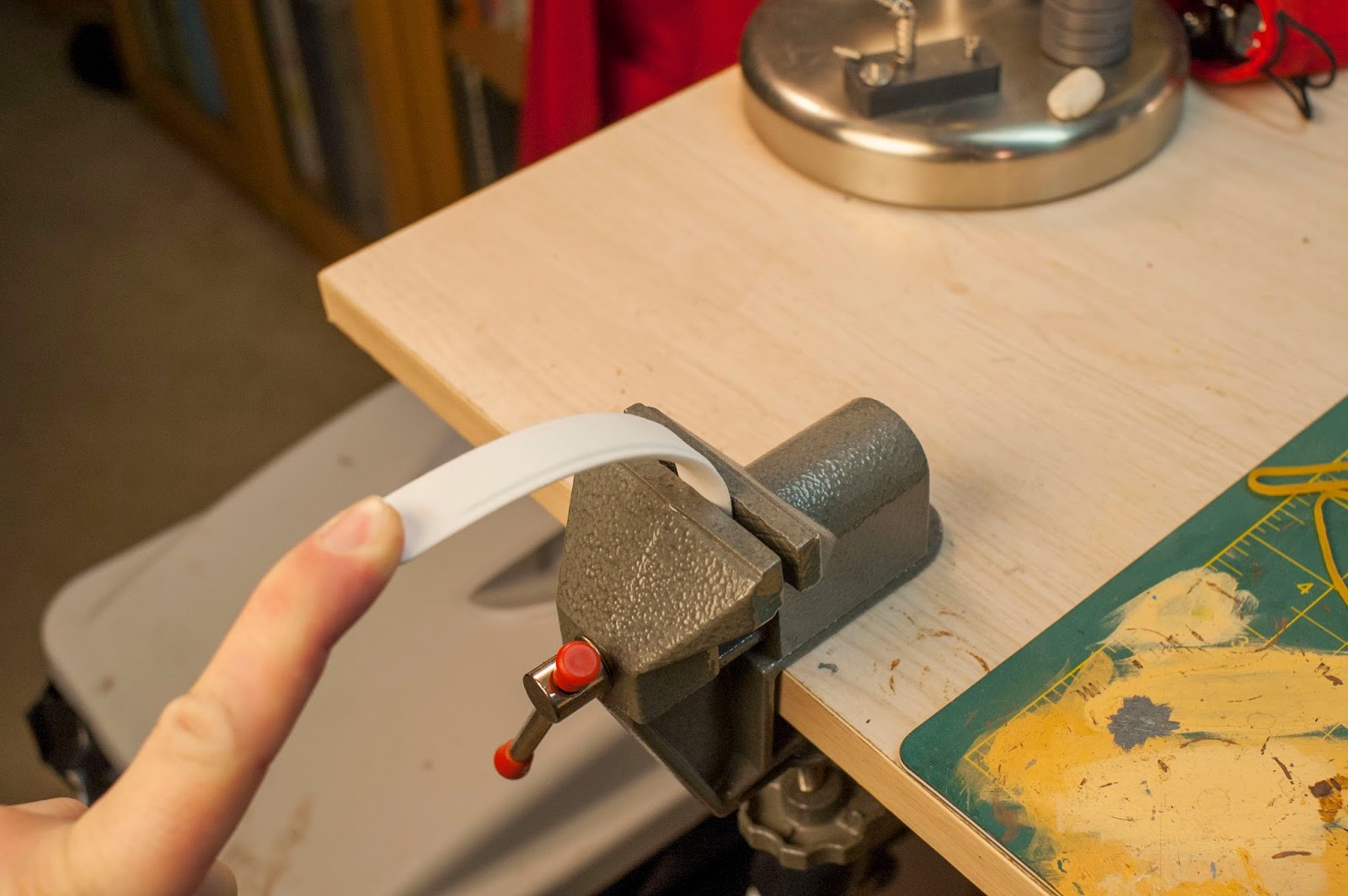 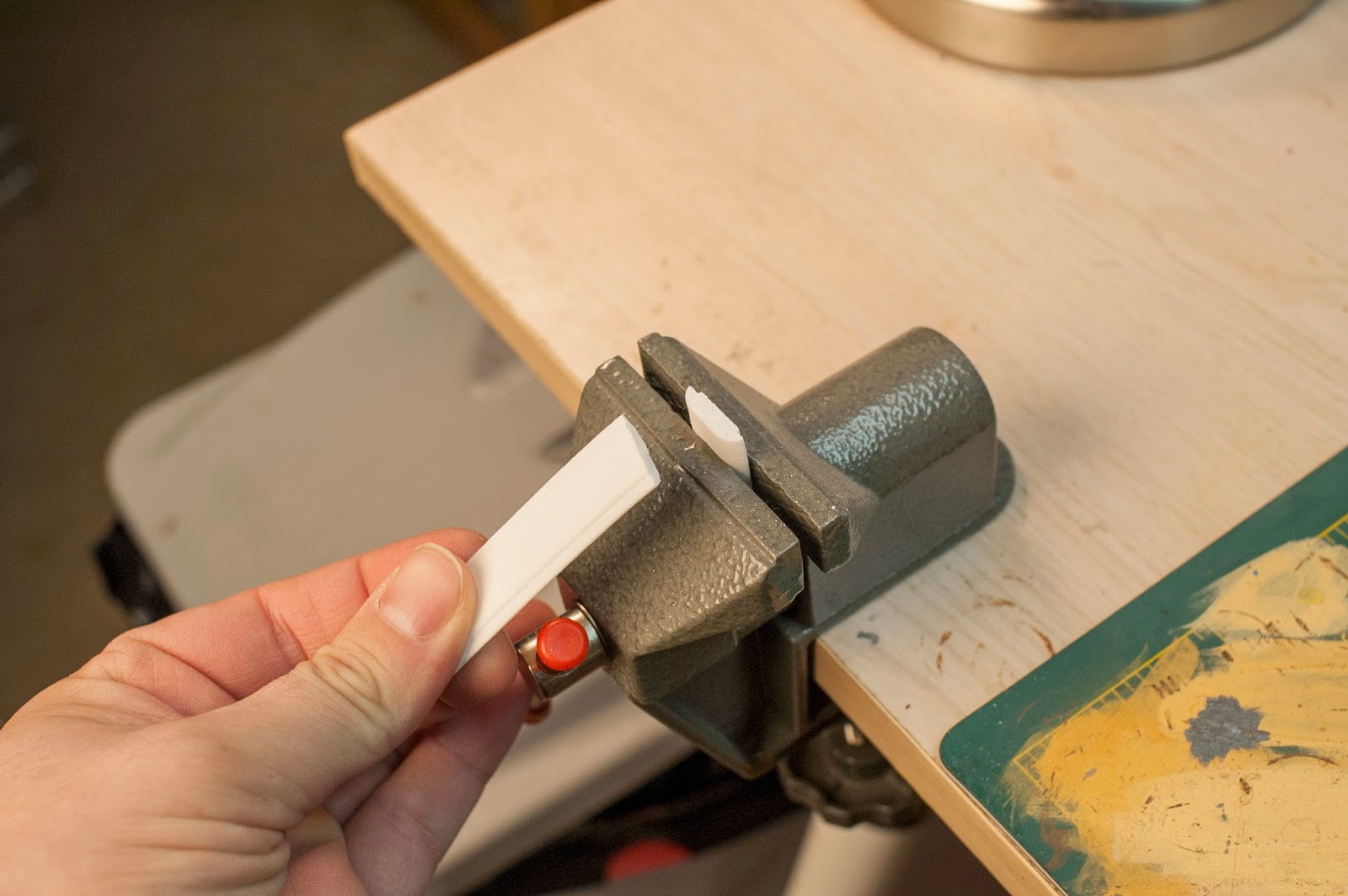 It finally broke with a hard snap when I bent it 90º. That's pretty darn good strength! Certainly stronger than any standard plastic of a similar shape, and it's miles better than the crumbly powder-based prints that I've worked with before. Which this material sort of resembles. 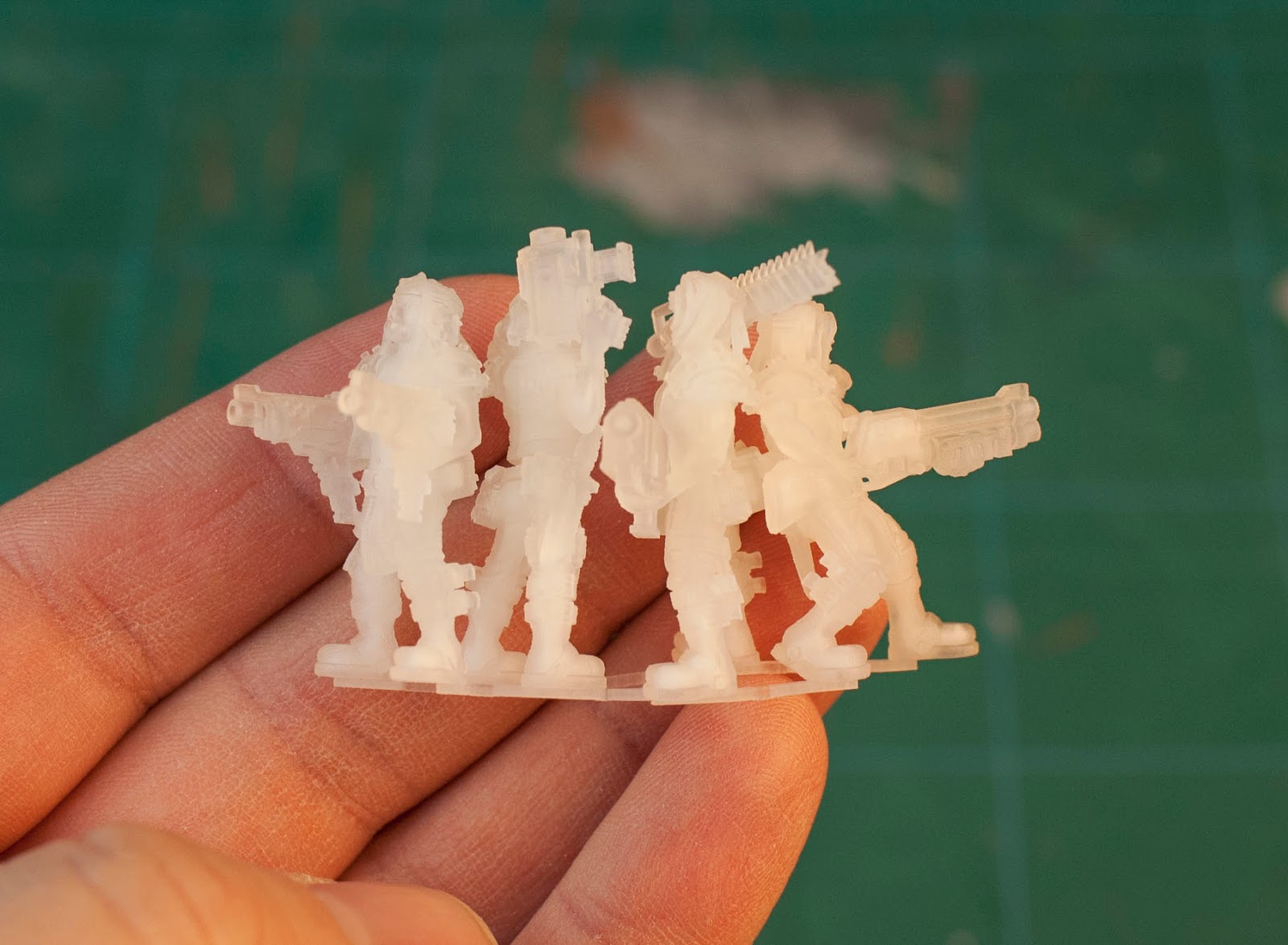 The models that I bought were made from a different material. Where the tongue depressors are rough and spongy looking, the 'Frosted Detail Plastic' of the gangers is translucent, and ultra-smooth. I'm not even sure it's a plastic. Probably a UV cured resin of some kind. 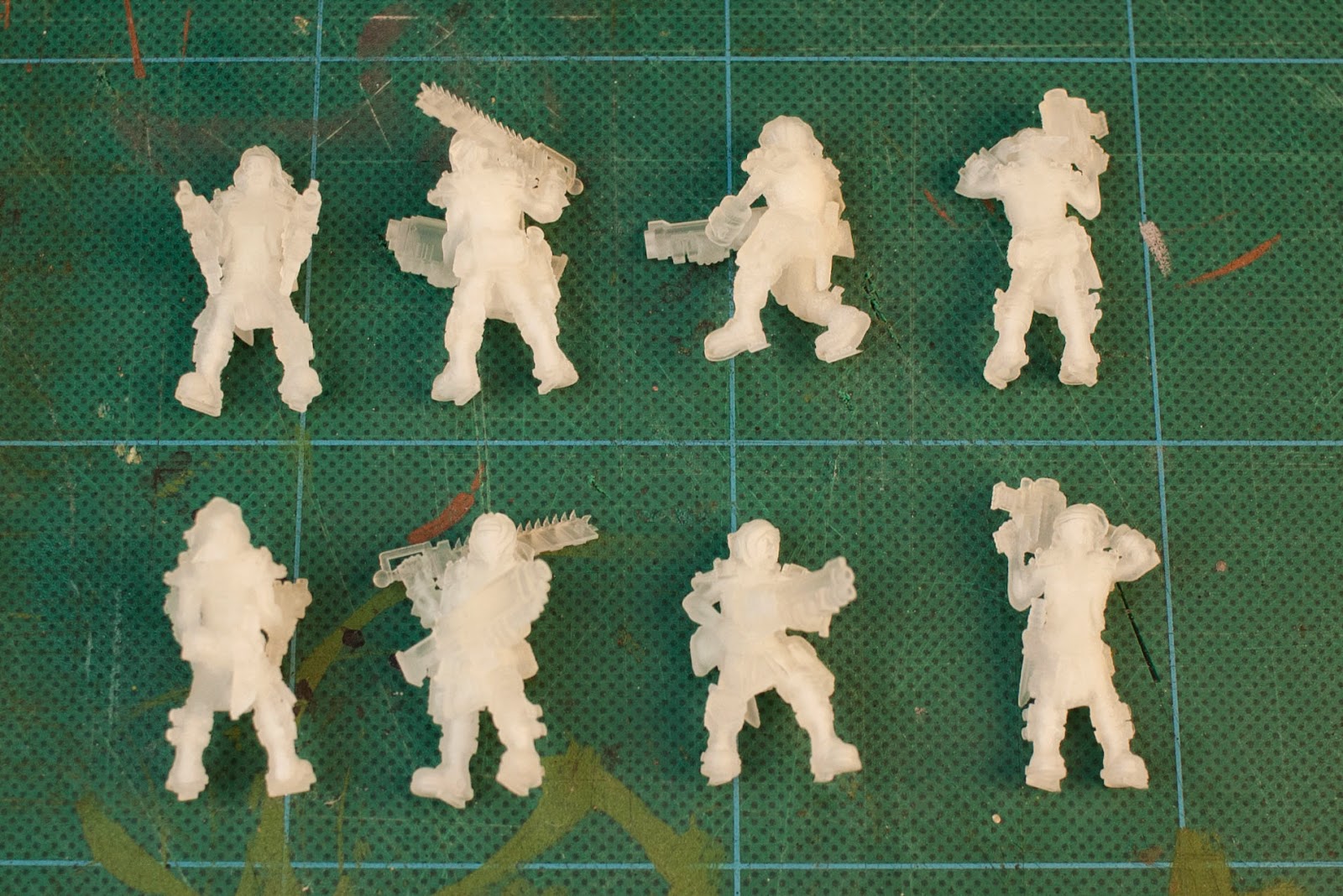 I really had to look hard to see any print artifacts, like ridging, and these are so shallow that I was betting that a coat of primer would cover them right over. 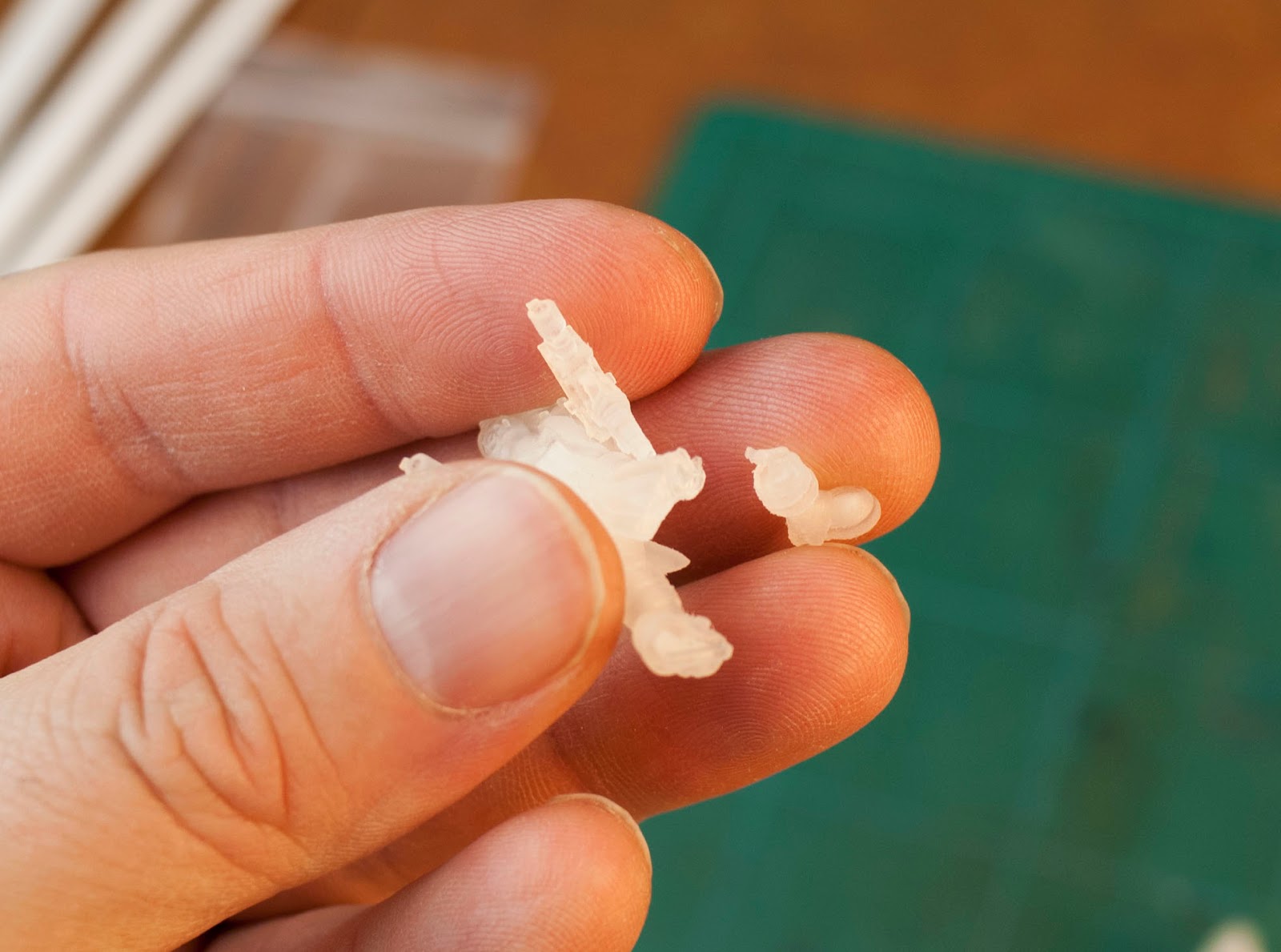 Unlike the flexible nylon of the depressors, the minis are quite rigid. With very little flex to them. Less even than Forge World resin.

Just to see what would happen, I broke off one of the models' legs. It snapped cleanly with about the same amount of force that it would take to break a FW resin piece. That same force would bend an injection-molded plastic piece until it turned white at the bend point, but wouldn't break it.

Fixing that leg was more problematic though. First I tried super glue, but it wouldn't bond. Nor would it glue the two halves of the snapped depressor together. Even though that material was much more porous.

Ditto with standard melt-type plastic cement. No bond at all on either material.

So, much like Mantic's resin models, I had to pull out the 2-part epoxy. Which worked great. The leg stuck back together perfectly on contact, and a few minutes later the epoxy cured it solid. I couldn't even tell where the break had been. I accidentally dropped a model onto concrete later, breaking off an arm. But again, the break was so clean that I was able to flawlessly repair it with epoxy. 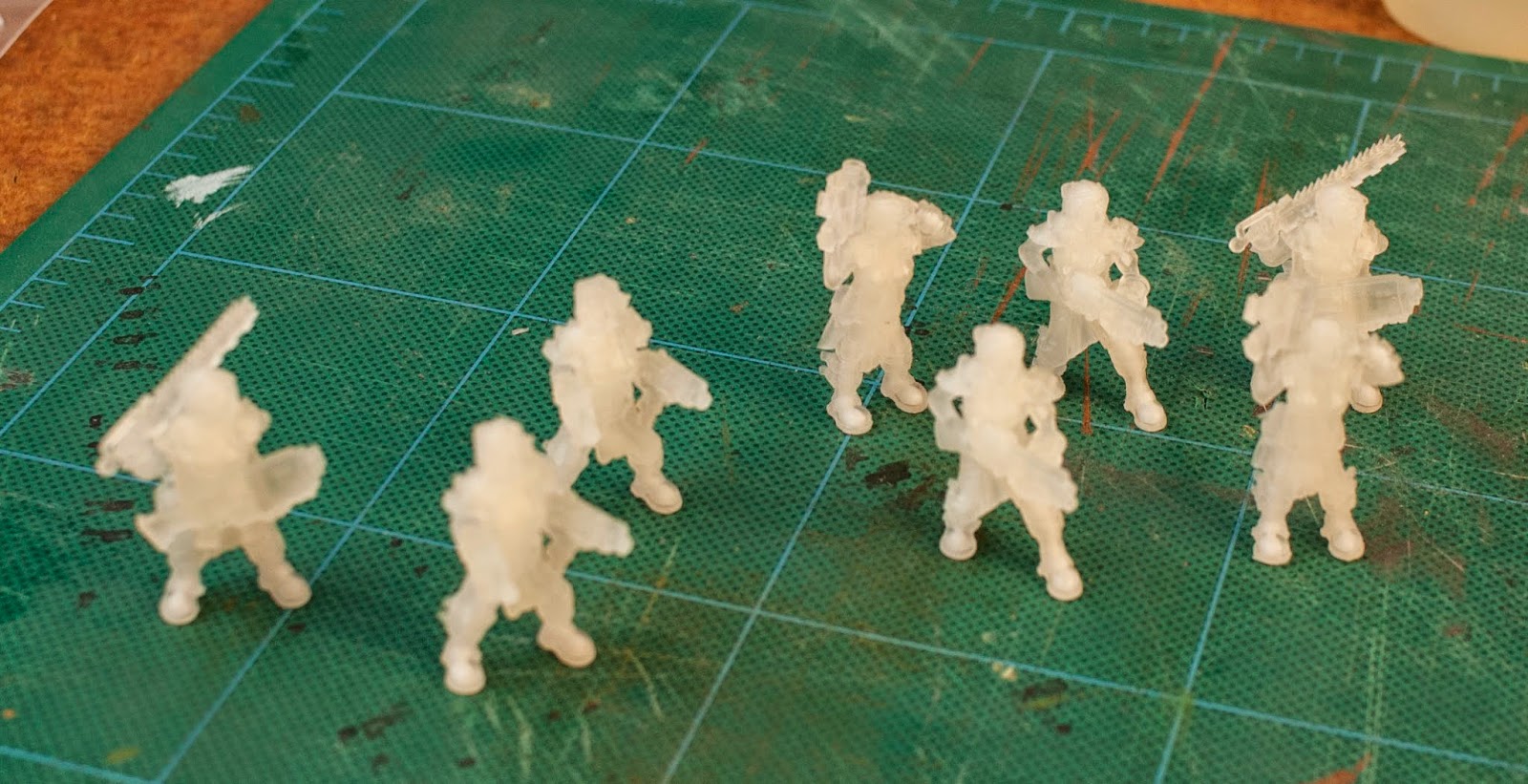 The good news is that there's almost nothing to clean up on these models. No mold lines, no barrels to drill (holes are there already), nothing. The only thing you have to trim off is the micro-sprue that holds each group of four together when printing. This snaps right off with a little X-Acto blade work, and the models had no trouble standing up on their feet afterward. 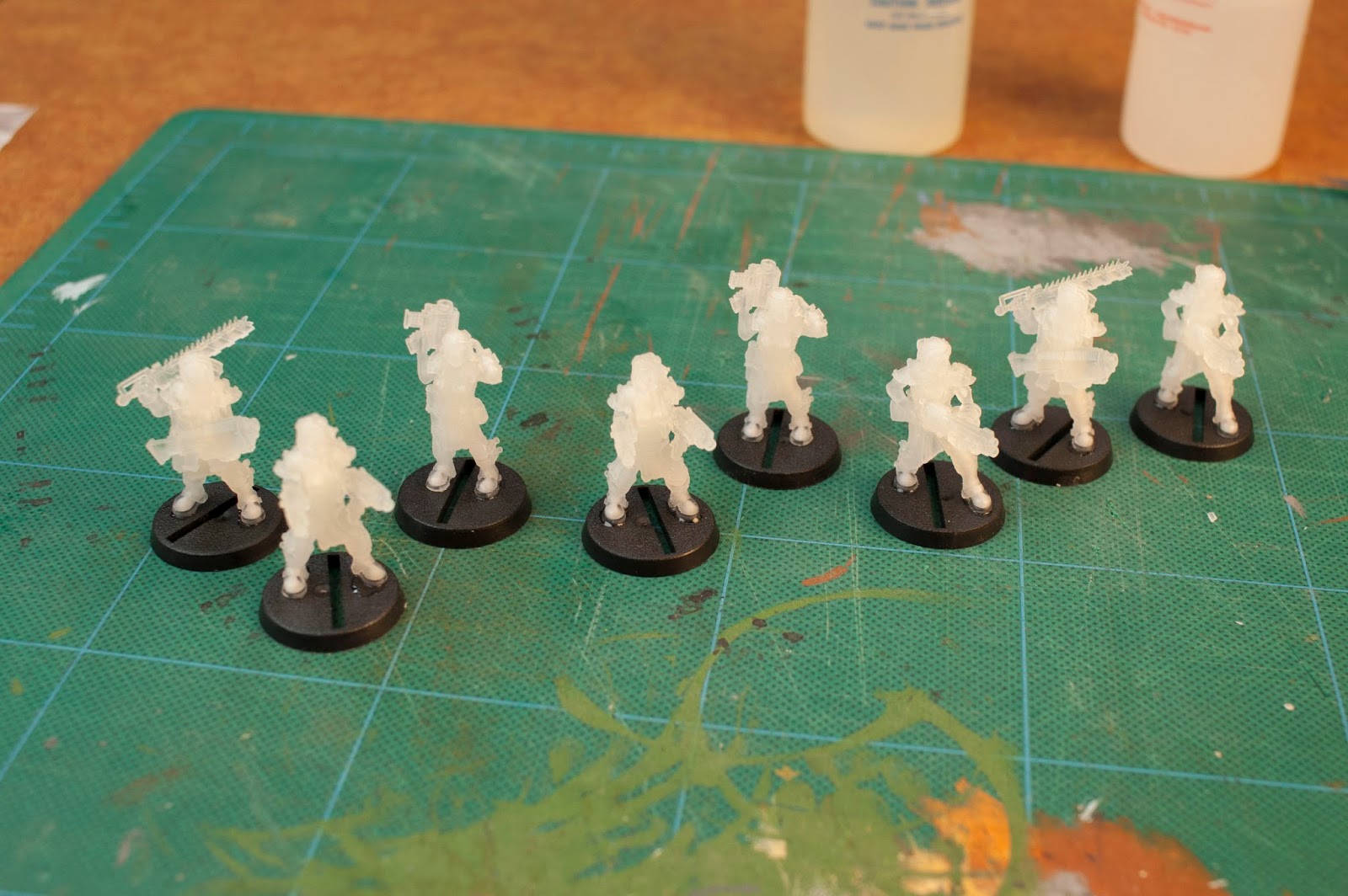 'Cleaning' and basing all eight models took just a couple of minutes. Nice!

Now this is where things got a bit difficult. 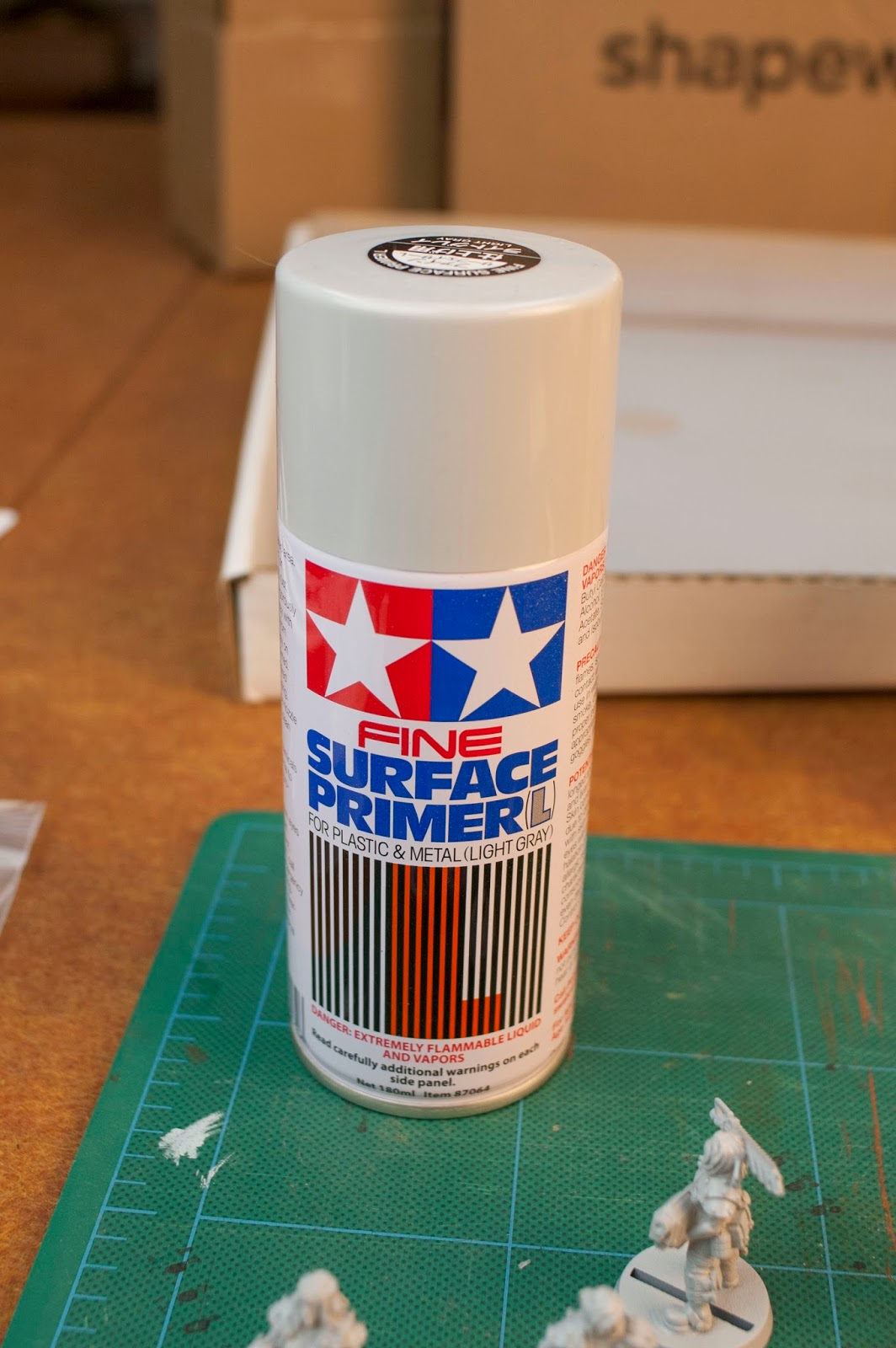 For years now, I've used Tamaya spray enamel primer. This stuff (usually) sticks to everything, and preserves every last possible bit of detail on the model.

That is, until I sprayed it on these models. The first few sprays went on fine, but as I finished up the coating, I noticed this spongy, mottled look starting to appear. 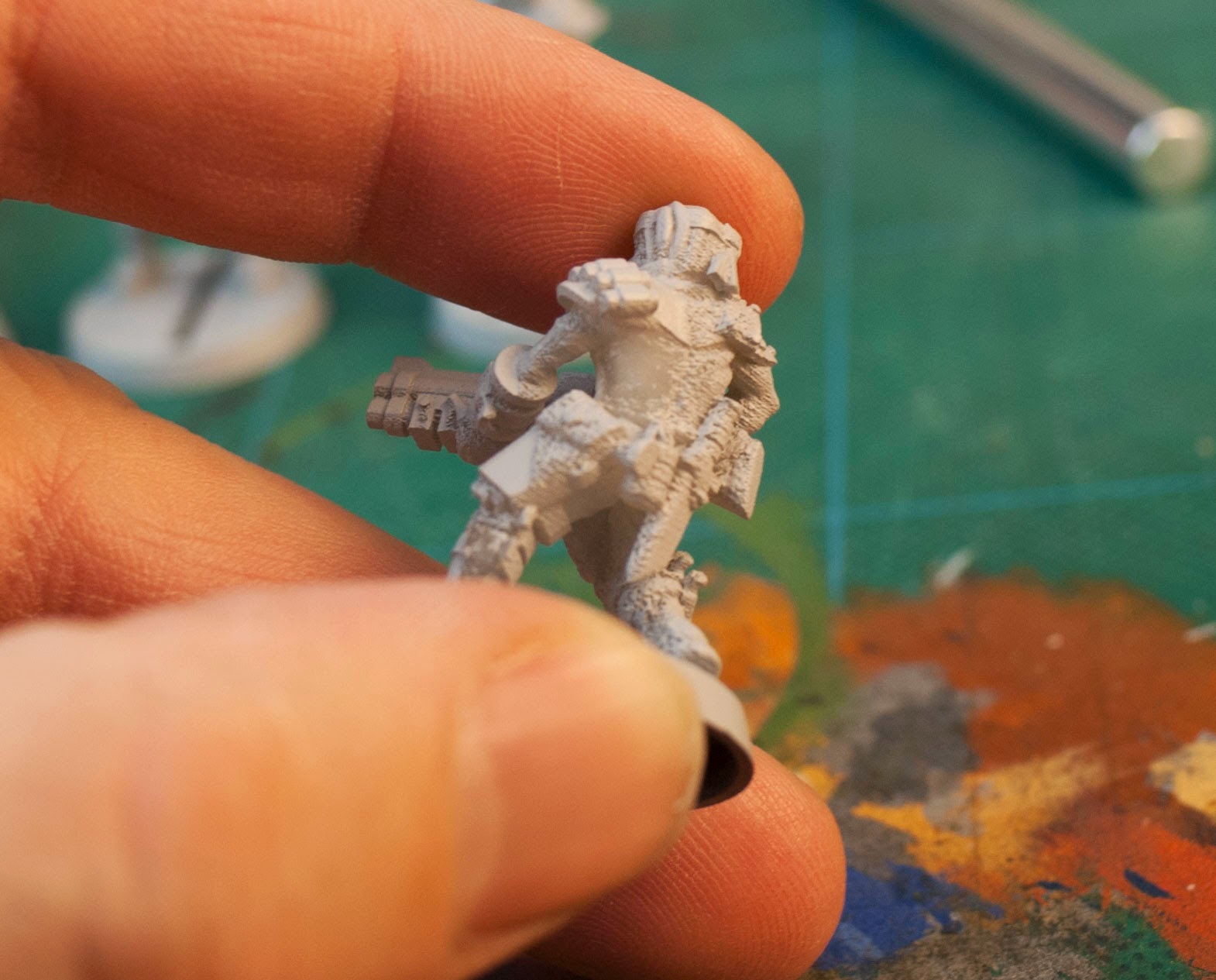 I was a bit afraid that the enamel had melted the surface of the minis, but fortunately this wasn't the case. Scraping the paint off lightly with an X-Acto knife revealed that the effect was just the paint failing to properly adhere to the plastic/resin. The models themselves were fine.

Focusing on the parts of the models where the paint DID adhere though... The models look great! There's no visible ridges betraying that these are 3D prints at all.

So I used my Dremel's brush attachment to take off all of the paint that didn't adhere on 4 of the models. I then VERY slowly undercoated them again. Spraying just 1-2 quick strokes at a time, and letting them dry 5-10 minutes between passes. Instead of my usual method of spraying the models with 2-3 strokes from each of 4 different angles before letting them dry.

As you can see, this go-slow approach resulted in a much smoother application of paint.

Once dry, I then did my usual brown wash over the grey undercoat. Which pops the details nicely for painting.

By the time this was done, I couldn't see any print artifacts at all.

Home 3D printing still has a ways to go. But the 3D print services, with their much higher-end printers, can deliver a smooth, detailed 28mm mini right now. One that is on par, or better, than single-pose injection molded plastic. At a price that's cheaper than metal, and only a little more expensive than standard GW multi-pose plastics.

(And yes, Battlefront has to worry too. If these were tanks, they'd be 50% cheaper than BF's resin prices, at an equal or higher quality!)

Detail-wise, these minis are amazing in certain ways. Whereas plastic injection-molded minis can't have deep gaps between an arm holding a gun and the torso behind it, these minis look very natural. In that there's a complete arm there. Much as if it had been assembled from a multi-pose kit. But with the rich detail of a plastic or metal single-pose model. The guns have barrel holes, knives hang down from belts without 'filler' behind them, and their handles point up from the belt without any filler behind them either.

On the downside though, these materials are not what we're used to working with, and that's going to take some adjustment. The Shapeways service itself is also having teething issues with their scheduling and package management, even after a year in business. So while you can get a very nice looking 28mm mini from them, you'll have to put up with more of a wait than you're used to when buying standard plastics. You also run the risk of not getting what you asked for on the first try (or getting something you didn't ask for). :)

As a proof of concept though, these minis show that detailed tabletop-ready models are possible now from the high-end 3D printers. Not with ridges and spongy looks, but at a quality comparable, and in some ways much better than, traditional metal/resin/plastic models made in molds.