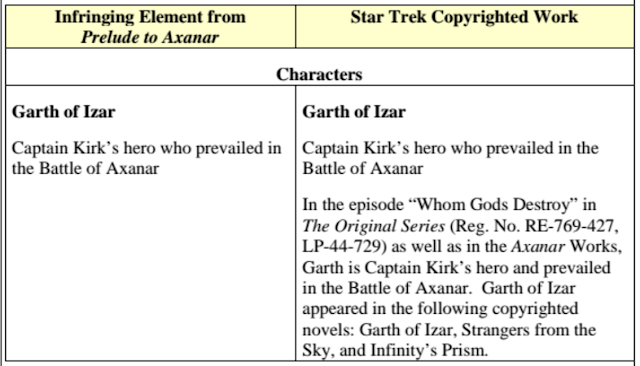 Here's Garth, as depicted in "Whom Gods Destroy": 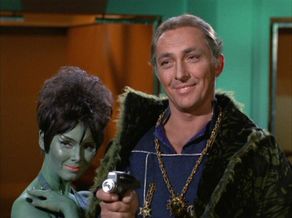 I suppose you could say that Alec Peters has a passing resemblance to him (better sue his mother!), but nothing about his costume or performance in Axanar can be confused with the Garth we see in this episode.

Since we're not shown Garth as his former starfleet-hero self, the descriptions of him and the Battle of Axanar are story IDEAS, not concrete expressions of those ideas. Which means that they're not protectable by copyright law.

Here's what the US Copyright office has to say about what can't be copyrighted. 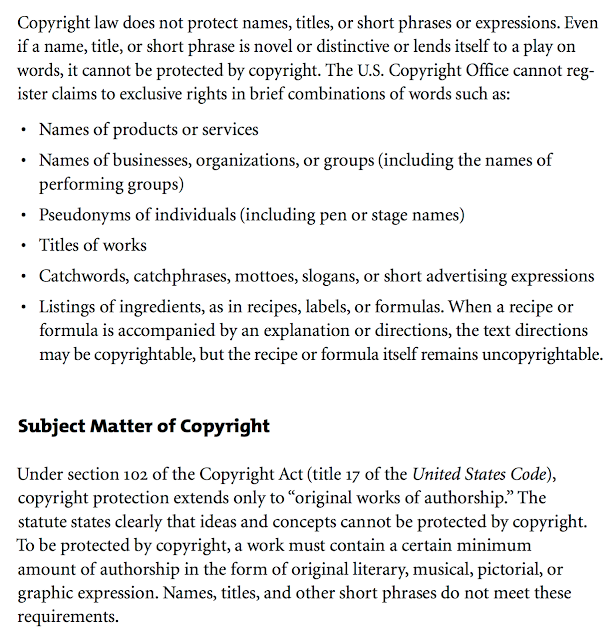 Now, some of the things on that list can be Trademarked. Which is to say that if CBS/Paramount registered them as names of specific products used in commerce, they'd be protected in the name of avoiding consumer confusion as to who made a product. But that's not what they're claiming here. They're asserting copyright violations for IDEAS.

That a CBS/Paramount licensee made a few books about one or more of those ideas doesn't mean anything in the context of TV/Movies, unless Peters was stupid enough to significantly copy one of those books when writing Axanar, which has not been asserted. 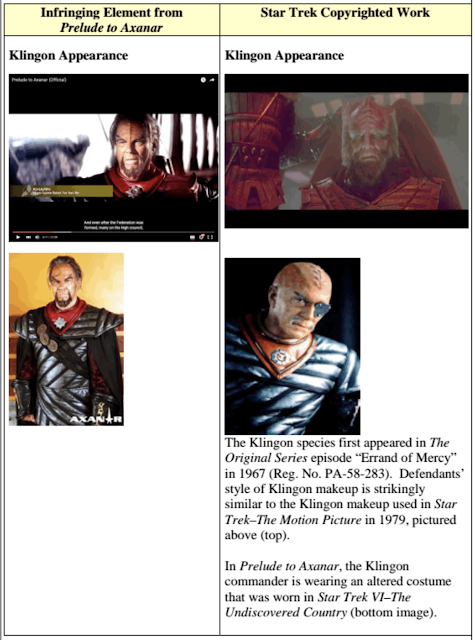 Now here we see a real honest-to-goodness copyright issue that should be in the suit. Axanar calls them Klingons AND copies fairly closely their previous appearance/expression in both the Trek films, and each of the post-TMP television series.

So the only copyright-able bits of a costume are its non-functional decorations. Which means sashes, broaches, medals, and such. These are clearly different in the Axanar version. 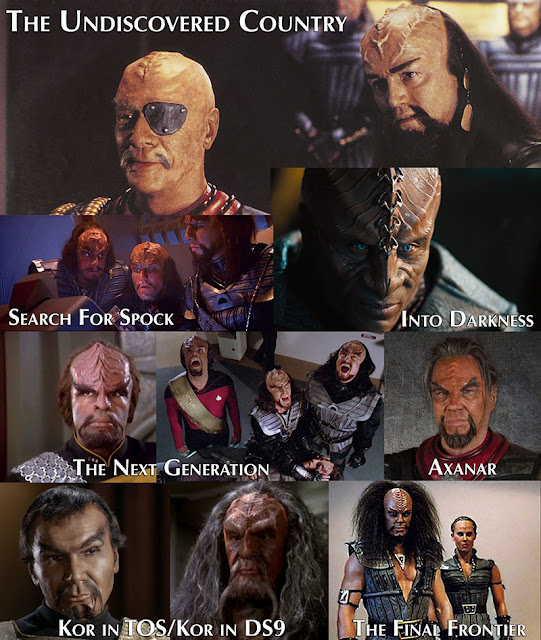 As for the makeup, it also falls under the "can't copyright functional items" ruling. So CBS/Paramount would have to get the court to agree that feature X on a Klingon is purely decorative (protected), and not merely an accentuation of that person's underlying face (not protected).

But then I look at how Klingons have been portrayed over the years, and there really isn't a single specific look to their makeup. Some have ridges, and some don't. Some characters used to not have ridges, but now do. Of those that do, there's no real consistency to how many ridges, where they go, or how deep they are.

So that means that the makeup of the Klingons isn't a concrete decorative expression, but an idea best expressed as "ridges on forehead... sometimes".

And so as an idea, the look of Klingon makeup can't be copyrighted. Ouch! 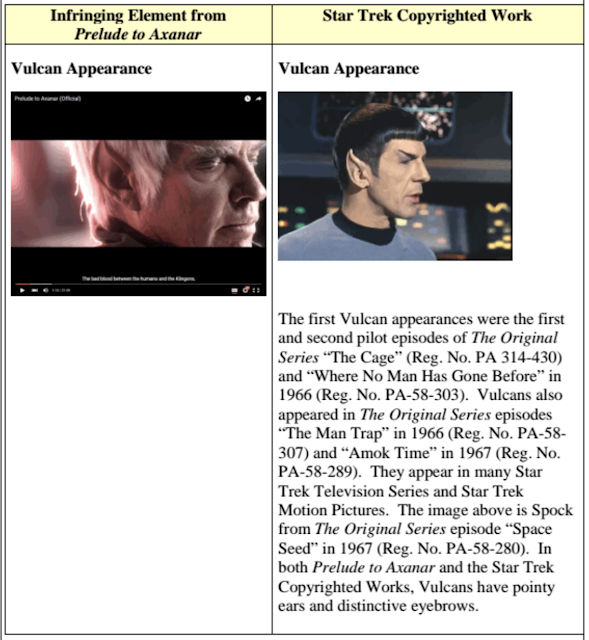 It's a lot more of a stretch for Vulcans, because this is the traditional appearance of elf and fairy creatures in mythology.

Given the Klingon's failure to be distinctive above, there's no way that Vulcans would be.

I mean, Elrond and his kin from the Lord of the Rings movies are only a bowl-cut away from being Vulcans. I think there's a very good chance that the appearance of Vulcans wouldn't be considered distinctive enough by a jury to be protected.  Klingons, on the other hand, are much more distinctive, and you have to do more than just put on ear extenders and some eyebrow makeup to portray one. 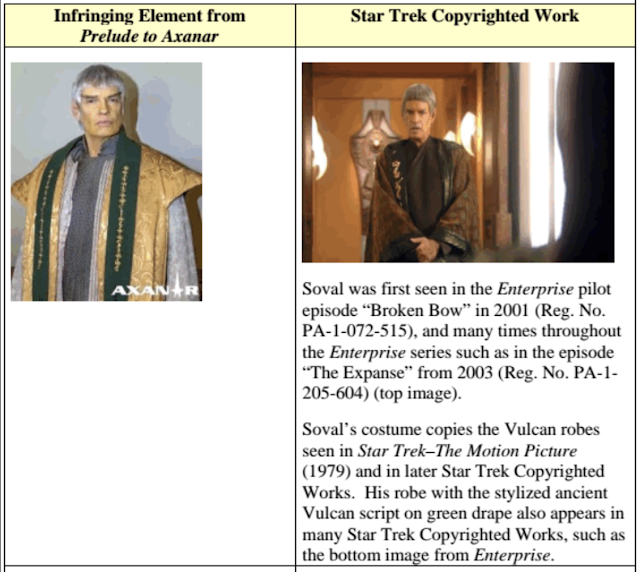 However here we have a specific Trek character that's been reproduced, actor and all, for the Axanar film. This is as concrete an expression as one could ask for. Sure, the costume has changed, but it's clearly an established Trek character, and the mannerisms/performance are certainly very close to what the same actor did while working on a character of the same name for CBS/Paramount.

And since we now know that the makeup and clothing can't be copyrighted, this point will have to rest on Soval being an existing character of Trek being portrayed in a similar way. Much less cut and dry now. 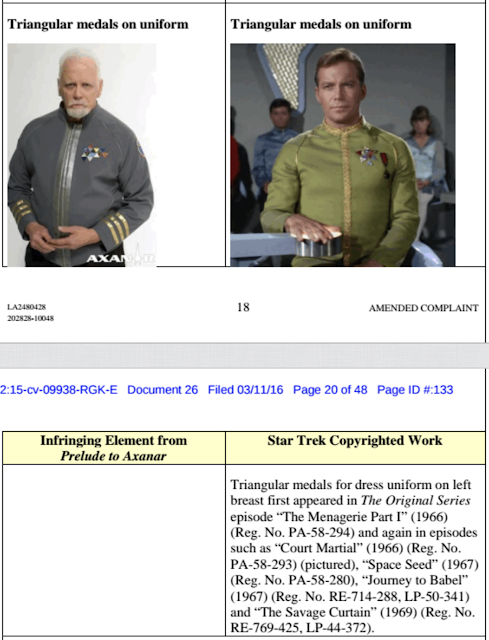 And they don't because clothing can't be copyrighted. That's why they're going after the medals, but even that is too much of a stretch.

But that's nothing compared to... 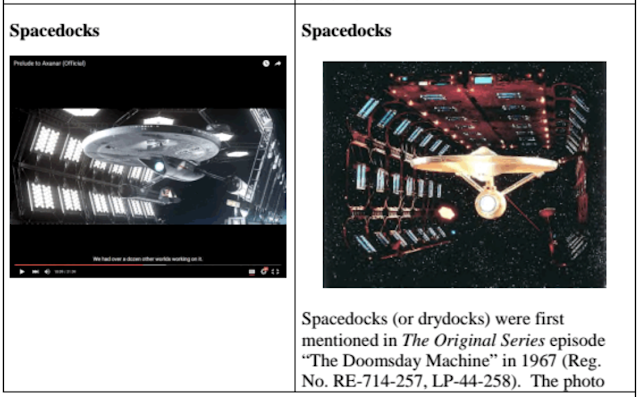 Yes, CBS/Paramount are asserting ownership of the IDEA of Space Docks. Which is utterly ridiculous. The only thing they can legally sue for is copying of their SPECIFIC dock designs, but Axanar's differs in both overall shape, color, and fine detail. Which, for such a simple design concept, is enough to distinguish it from CBS/Paramount Trek.

You might think a little bit of difference like this doesn't matter, but copyright precedent relies heavily on "decorative" design details being a distinguishing characteristic. That's why if you read through the testimony of the GW vs. Chapterhouse case, you'll see a lot of attention paid by the lawyers as to whether specific bits of Space Marine armor were designed to be "functional" or "decorative" in nature. "Decorative" differences are considered to be more creative, and thus more protected. 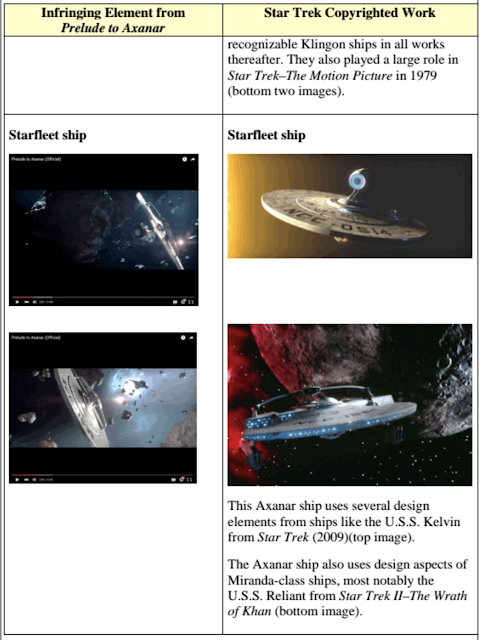 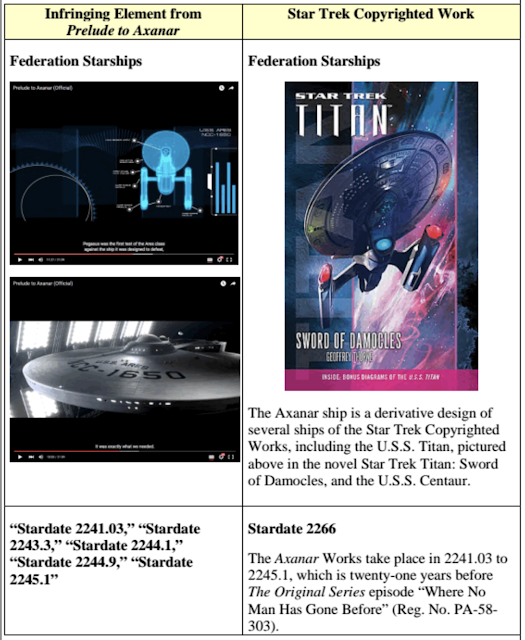 Now this is something that I absolutely want to see argued in court, just to see where the decision goes, because there are a LOT of sci-fi ships in movies and video games that are (like a lot of actual Trek designs) merely re-arrangements of Saucer/Hull/Nacelles.

Does the placement/proportion of the Saucer/Hull/Nacelles make a design infringing, or is it the finer decorative details which are applied to them? Has the Federation Hull appearance become so generic that only the finer details can legally set a design apart?

Because here is the Titan: 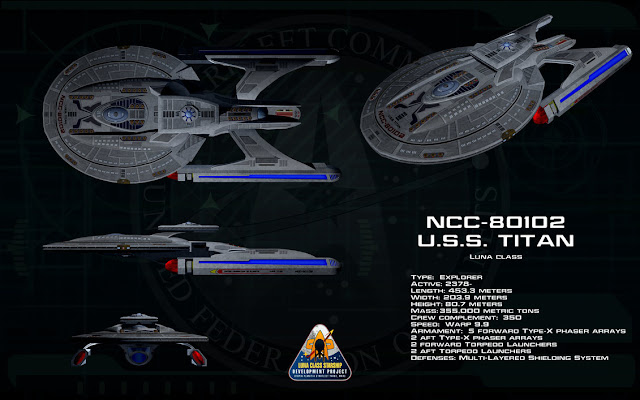 And here is the Ares from Axanar: 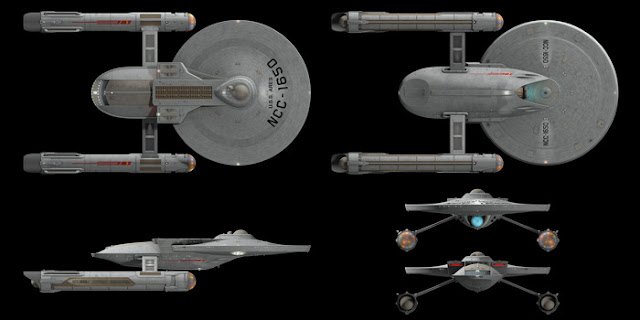 Both are basically Enterprises with the nacelles bent downward, but they both differ in the shape and proportions of their larger elements, and in the color and geometry of their fine hull details. My gut tells me that a jury would find the general design too generic to protect, and judge them on their decorative details, as happened in the Chapterhouse case.

A ruling here would also apply to disputes between companies like Apple and Samsung over the relative visual "look" of their tablets, so this is actually something really important to argue from a design standpoint.

Sigh... Really? They also claim the word "Stardate" in another entry. 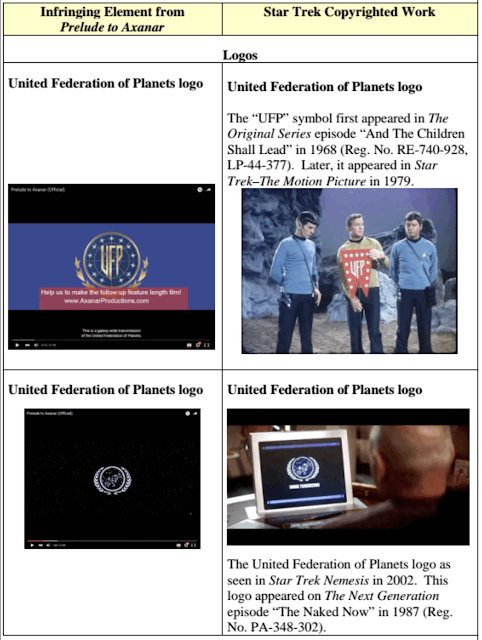 Now this one has the distinction of being both wrong, and right. The UFP logo on the flag held by Kirk looks nothing like the UFP logo of Axanar, apart from the shaping of "UFP". So no joy for CBS/Paramount there.

The United Federation of Planets logo is clearly all-but-identical to the one on Picard's computer. So that's a cut-and-dry case of infringement.

There is some wiggle-room here though, as it's only one element of a larger work (the episode). We'll just have to see how it's ruled, but I do think it should be argued. 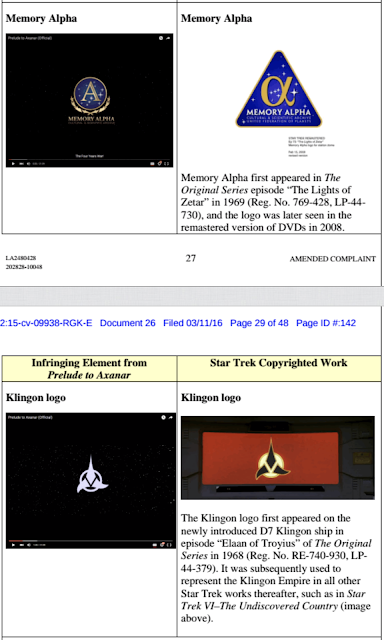 And here we go again. The Memory Alpha logo is completely different in shaping and design. Plus you can't copyright the name "Memory Alpha". But the Klingon logo used by Axanar clearly infringes on the one used by CBS/Paramount, since despite some color changes, the overall silhouette is identical.

Unless the Klingon logo is found to be too simplistic to copyright. 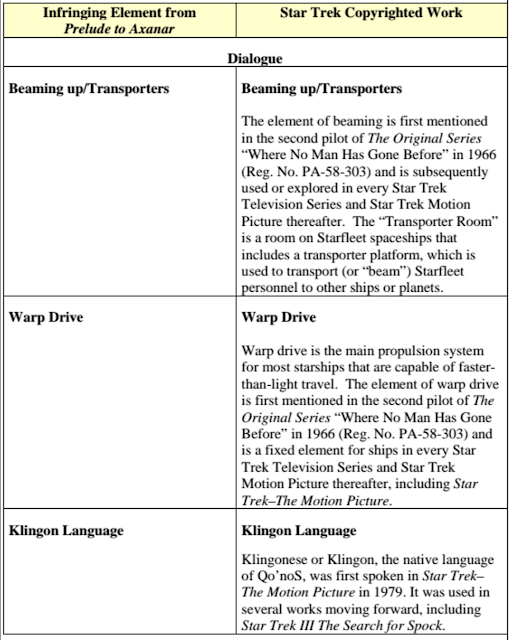 "Beaming Up" and "Transporters" are completely generic words in combinations that can't be copyrighted. "Warp Drive" started out distinctive (but still not copyrightable) in TOS, but has become a generic term that even NASA uses today.

As for the Klingon Language, this article makes some hilarious points about that: 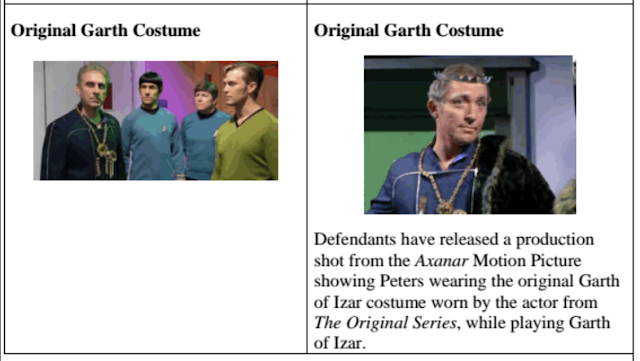 Now this would be a point in CBS/Paramount's favor IF this shot were from Axanar, but it's not. It's a still from when Peters played Garth in "Star Trek: New Voyages" a different fan-made Trek series. Kirk, Spock, and McCoy aren't even in Axanar.

Ooops! I can't wait for the fallout from this screw-up.

If CBS/Paramount withdraws this assertion because it's not from Axanar, then they open themselves up even more to allegations of only selectively enforcing their copyrights & trademarks. Copyrights don't always have to be defended, but they historically don't get judgements as favorable to the plaintiff as when they're even-handed in their enforcement.

Trademarks though, do get invalidated if they're not defended. So that's an even greater danger.

CBS/Paramount have a case here, as I do believe Axanar Productions have infringed on many copyrightable items from Trek. The only real question is how much they've infringed, and what the consequences of CBS/Paramount not also suing every other fan production will be.

(PDF of the updated suit: https://www.documentcloud.org/documents/2757228-Axanar-Klingon.html)

But obviously CBS/Paramount, like Games Workshop, is about to get smacked in the head with the reality of what is and isn't protectable about their IP. Like GW, they think they own IDEAS, instead of the actual expressions that came from those ideas. They've also, like GW, been very sloppy in the research and documentation of their claims.

CBS/Paramount will "win", certainly. But like GW, whatever they get in damages will probably be heavily outweighed by what they lose. In money, in perceived and actual IP protections, and in the goodwill of their fans.