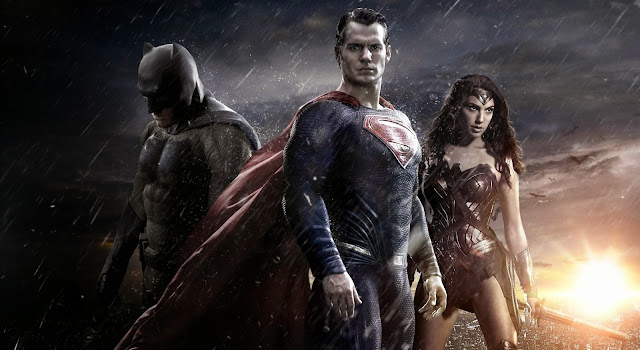 I'll start out by saying there are scenes and segments in this movie that on their own are very cool. Batfleck is the best Batman since Keaton.  Arguably, the best live-action film Batman.  Aflleck must have eaten a steady diet of Christian Bales for breakfast to prepare for the role.  Guy's built like a tank.  He's so good at being Batman it really shows up Cavill as Superman.  It's very obvious one actor really really really wanted to be the character, while the other guy just wants a paycheck.

Batman does Batman things in a way he hasn't done since the Burton movies.  Like, remember in Batman when he kicked that guy into a bell and he falls down a shaft(yeah, that guy's dead). Or that time he strapped a bundle of dynamite to a dude's belt and kicked him down an open manhole(he died too).  Or the other time where he fired machine guns and rockets into like a group of 100 Joker goons manning gas balloons?(dead, dead, dead).  This is that kind of Batman.  There's a terrific Bat-mobile chase sequence and a mook fight as good as as anything out of John Wick.  The actual Batman vs Superman fight is solid and works well, but those other two are the high point of the action.

And if you're like, "OMG, Batman doesn't kill!"  This is pretty much a post death of Jason Todd, gives zero-f@#$s Batman.  Which leads to one of the problems the movie has as an isolated piece of cinema.

I can totally see what they were going for with the motivations for Batman, Superman and Lex.  To me, how the characters acted made sense mostly because I've got more than a passing knowledge of the DC universe.  These versions of the characters would fit in well post-whatever crisis in the last 20 or so years.  This is the Clark Kent as primary personality Superman.  This is the high-functioning psychotic Batman who's probably just as crazy as the joker. This is the Lex that's driven to insanity over jealousy of the unlimited power that Superman just squanders away.   If you view the movie through the lens of those characterizations, it's works much better.

Of course, that's a failing on the part of the director.  I shouldn't have to bring that with me to enjoy the movie.  Marvel gets away with shortcuts in their movies cause they put in the work.  BvS was just a few notes short of selling it, mostly due to the rushed pacing and need to edit in all the various threads of the plot.

This movie is trying to do a lot.  It's basically trying to be all the Marvel movies between Iron Man an the Avengers.  Including the Avengers.  So start with The First Avenger condensed into 15 minutes. Next interleave Thor hanging out in Nevada with Tony Stark trying to cure his palladium poising for about an hour.  Finally have a 5 minute flashback to the Hulk's origins right before Loki and the Skitarii show up out of nowhere.  That's kind of how coherent BvS feels at times   WB is impatient to have what Marvel/Disney have, and that is the source of this movie's failings.

Remember though, those first phase Marvel movies weren't all that great themselves.  They were workman like 60% Rotten Tomato score movies.  And that's pretty much where I'd place BvS.  It's better than all of the other DC false starts.  Better than the Spider Man 3 and the new Spider Mans.  Better than the Fantastic 4s. Better than all the X-Men movies between 2 and First Class.  On par with the Phase 1 Marvel stuff.  Not terrible.  Not great.  Average.

Critics have a hate-on for Snyder and this version of Superman.  They think he's a hack director(he is), and they think Cavill's Superman is too dark and bland(yeah, probably).  Any reviewer over 50 isn't going to accept any Superman not played by Christopher Reeve and directed by Richard Donnor.  Once you weed out the Marvel fanboys, the DC fanboys having fits over the the shade of black they used for Batman's cape, and the true art critics wanting to pop the super-hero bubble you are left with a good 30% curve you need to apply to  BvS's aggregate review score.

It's a movie that suffers from poor characterization, has a rushed and poorly edited plot, but has scenes that individually are very enjoyable.  (Like randomly inserted too, there's a vision of the future scene that's just kind of there.  It's awesome and foreshadows tons of Darkseid craziness, but they could have just left it out or saved it for a Justice League cold open).  The only fight I didn't like was the Teenage Mutant Ninja Doomsday finale.  The Wonder Woman parts were the only diamonds in that hot mess.

The film did leave me thoroughly stoked for the Wonder Woman and new solo Batman movies.  I want to see more of those characters.  And really, wasn't that the plan anyway? If this movie is the price of admission for that and some Jack Kirby New God awesomeness, I'll take two tickets please.
posted by CaulynDarr at 9:30 AM