Let's start off with an inflation-adjusted table of each Trek movie in the series, and how they performed relative to their budgets.

See the bottom of the post for the world-wide numbers, as these are only the US numbers.

What we see is that Trek 2009 was the most expensive movie since The Motionless Picture back in 1979. But hey, look at that gross profit! It's over five and a half times what they made on the Hippies-In-Space Insurrection installment, and a damn sight better than the choking loss they took on Nemesis.

If we sort the table by Gross Profit...

...We see that the reboot came in 5th overall, right after the Search for Spock. Hmmnnn... The Search For Spock? I'm one of the rare people who love that movie, but 5th place is only just a bit higher than average. You'd think it would be 2nd or 3rd at least. 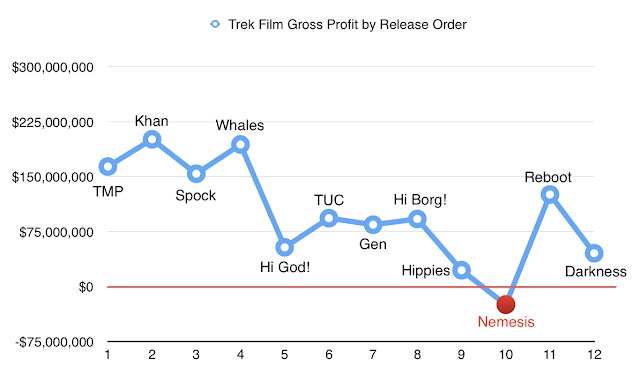 Charting this shows a nice uptick, but look at Into Darkness. It's got a huge falloff compared to the Reboot in terms of Gross Profit. In fact the only two films with less Gross Profit are Insurrection and Nemesis. 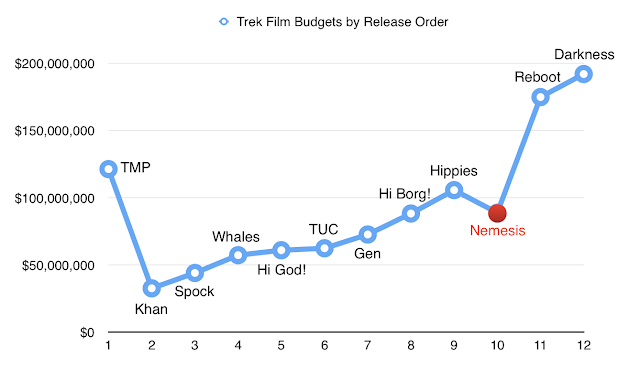 The budget chart shows the answer. It made less, but also cost more to make. In fact since The Wrath of Khan, Trek budgets have been steadily marching up, with the lone exception of Nemesis.

So now we get to the meat of my concern: How are Trek movies doing in relation to the cost of their budgets? What is the return on investment that Paramount has been getting for their money? 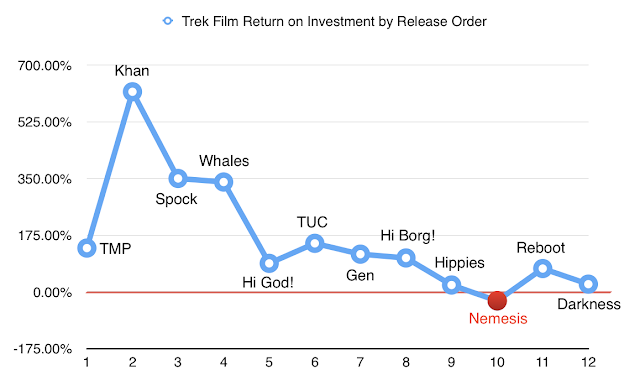 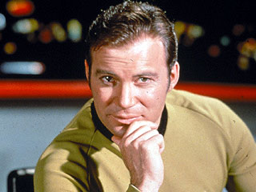 How does this tie into Axanar? Here's my theory...

Paramount has almost surely been looking at this cost/performance data far longer than I have. At some point they decided to reduce the budget of their 10th film and see what effect that had on the ROI.

Unfortunately, that movie had a horrible story, too much gratuitous CGI, and the film before it had already poisoned the well. So like The Final Frontier it dipped in ROI relative to the overall trend; becoming the first Trek movie to ever post a loss.

Instead of cutting the budget again they doubled it, and added more ACTION to the storyline from a director that really wanted to be making Star Wars movies instead (before he actually got to). The result was a nice uptick in gross profit, but only a modest rise in ROI. In those terms it actually came in 9th AFTER Shatner's mostly horrible (except for one scene) The Final Frontier.

But hey! They're making money again, and an upward trend is nothing to sneeze at, right? So they raised the budget again, hired the same director, and... We got Into Darkness. The worst grossing Trek film aside from Insurrection and Nemesis. It did manage to take in just over twice the gross profit of Insurrection, but it's ROI was only a pathetic 2.6% better.

So Paramount is panicking... Again. They see this as a resumption of the trend line that led to the failure of Nemesis.

Star Trek Beyond is coming out this summer, with a modest budget that's not quite $25M less than the 2009 Reboot, and it has an established action director at the helm. But when the trailer premiered... Yeah, not good. A pathetic number of views, and the dislikes actually outnumbered the likes for some time. "Trek & The Furious" became its unofficial nickname.

So now they're shit scared that the movie will bomb, and they don't know what they'll do afterwards if it does. Given the trends, this movie bombing could make the franchise unsustainable for Paramount. Clearly they're spending too much on these movies and not focusing on the characters and stories fans care about, but they don't know how to fight the trend.

And then Axanar pops up on their radar, producing the best Trek anyone's seen in over a decade on an insanely small budget that makes Wrath of Khan's look like Avatar's in comparison. It doesn't matter that it's mostly been paid for already by Kickstarter donations. If it makes Beyond look like more of a turd to fans, and helps it bomb, then Axanar must be stopped at all costs.

Hubcap Dave made a good point about domestic versus world-wide numbers, and when I checked my sources I had indeed (and by mistake) only used US box office numbers.

So here's the new table, which includes both:

Now Hubcap echoes a lot of commenters I've seen, and I had assumed that he was right in saying that the early Trek films didn't do a whole lot of business overseas. The presumption being that the two newest films had finally cracked open that market. Which, if you take the pessimistic view, is because they've excised a good deal of the philosophical attributes that define the spirit of Trek.

But low and behold, the inflation-adjusted numbers don't bear that out. Let's take a look...

Adjusted for inflation, the 2009 Reboot beat out the Motionless Picture in both US and WW ticket sales. But Into Darkness moves up a spot in the WW numbers to 3rd place, pushing down The Voyage Home. Looked at this way, both movies still did absolutely fantastic compared to Nemesis.

For US profits, the picture looks much more dim, as I said before. Though with WW sales added in, the Reboot shoots up to #2, and Into Darkness takes #3. A vast improvement!

But when we look at the ROI numbers, all that happens it that both movies move up a place, displacing The Final Frontier. They're raking in vastly more cash, but they cost a hell of a lot more to make too. 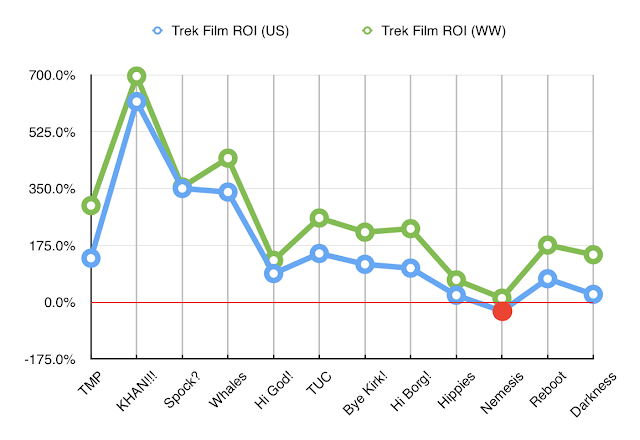 So while Trek is a little healthier than I thought at first, the world-wide numbers only push up the points on the trend-line a little. The downward ROI trend is still there, and Paramount very badly wants it to go up for Beyond. Another First Contact to Insurrection-like drop could easily make Paramount's ROI on that film very slim indeed. Which is likely why they cut the budget.

And Beyond wouldn't necessarily even have to be a bad movie to do poorly.

Personally, I find Nemesis to be a much better film than Insurrection, but I didn't see Nemesis in the theater because of how utterly god-awful Insurrection was. A very similar risk may face Beyond from the disgust so many fans have for Into Darkness. Beyond may deserve more of a chance than it gets simply from the shadow cast on it.