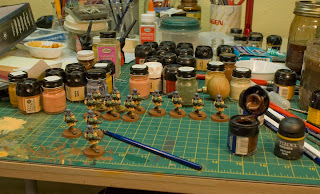 I've set myself the goal of having a completely painted force for the October 10th tournament at the South Store. The tanks are almost ready to go. My Chimeras need 1 more nights' work, plus one or two more for the Hellhounds. I finished the Astropath a couple of weeks ago and Marbo was finished last week. That just leaves the one thing I've been putting off over and over again... the meltas.

I had all of 2 Tallarn melta troopers when the 5th edition codex came out. So I had to scramble to collect them when the codex came out and it became even more obvious how gimpy my lascannon HWTs would be. So I trolled eBay for 5 of them, and paid through the nose for the rest from the GW online store. Collecting old ranges sucks sometimes. :)

Anyhow, I can't put off painting them anymore, as they're an ugly brown eyesore in the midst of my otherwise nicely painted squads. So I've had to set up the assembly line. I'm painting 13 total troopers, 2 of which were already painted but needed touch-ups from years of wear and tear.

There's a certain Zen to painting large multiples of exactly the same miniature that transcends the boredom somewhat. By the 5th guy, you find that you're on automatic, laying colors down in a strange pattern decided upon by your unconscious mind as you rotate the mini around in your fingers.