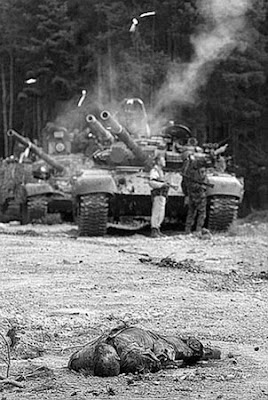 After a week of 40K withdrawal due to family commitments, Farmpunk and I finally managed to get over to the North Store for a rematch. We were the only ones there... again. But at least that meant that we got our pick of tables. Protem was off in the Phantom Zone or something this week.

We rolled up Annihilation with a Spearhead deployment. I then rolled first turn... Hooray!

I brought 4 squads of Vets in Chimeras. One of which was packing plasma. The CCS was tooled out with melta and an Astropath. With a Hellhound, Russ, and Demolisher in support. The Sentinels were packing autocannons. This was one Hellhound short of my usual mix, but I'm catering to the comp rules for the upcoming 1500 pt. South Store tourney, where you lose points if you max out any FOC category besides troops. You also gain points if your troop choices are equal to or more than any other 2 categories combined.

Farmpunk brought 2 units of =][= Stormies in Rhinos, with 2 units of melta/flamer Sisters (Also in Rhinos) to keep them in line. The Exorcists were there, of course. But he also brought along an inducted IG platoon with lascannons and plasma. The Platoon Command was in a Chimera and was equipped with 4 meltas.

Farmpunk also brought along the Saint, just to show me how she works.

I chose a corner that gave Farmpunk a nice big building to hide his Platoon in on the opposite side, but I wanted to make sure that I had enough room to maneuver around. The corner I chose had 3 approaches to the center of the board, while Farmpunk's had only 2. The last thing I wanted was for one dead Chimera to hold up my entire advance! And hey, prying IG out of buildings is what Hellhounds are for. :)

Farmpunk set up his armor in cover as much as he could, with the intent to weather the storm and then hit me hard in return. The Saint was set up in the middle of the 3 tanks in his center.


Farmpunk tries to steal the initiative, but rolls a 3. Ere we go... 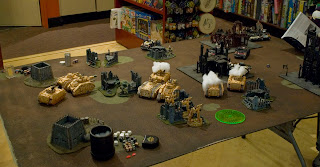 I move everything up and pop smoke on my forward Chimeras. The Russ and Demolisher reach out and immobilize the center Sister Rhino, which means they're walking into my line! Even better, the Saint is caught in both large blasts and is insta-killed. She shuffles off to heaven, waiting to deep strike back in later.

The Sentinels fire their Autocannons at the Rhino on my left. Only one has LOS, but it's enough. Both shots penetrate and blow up the Rhino, killing 4 of the 5 Stormies. Leaving a single melta gunner out in the open. 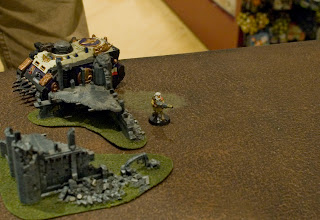 On his turn, Farmpunk moves this lone Stormie into cover, while moving the Rhino full of Sisters back towards the ruins where the IG platoon is.

(With this move, his advance is over.)

The =][= Stormies in the center move up 12" through the area terrain and pop their damned =][= smoke. His Platoon Command moves up on my right and fires it's meltas into my lead Chimera. I fail both cover saves and the Chimera is wrecked. The squad gets out with it's (painted!) melta gunners lined up for a shot next turn.

The Sister squad in the immobilized Rhino, meanwhile, gets out and they start slogging toward my dead Chimera. I can almost hear Farmpunk licking his lips in anticipation of what those girls will do to that poor Vet squad.

The Exorcist on my left manages to immobilize the Hellhound, while the one on my right whiffs entirely while shooting at my Sentinels. 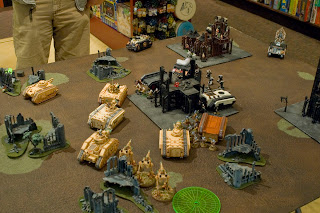 First off, I kill that lone =][= Stormie with the meltagun that's hiding in the ruins on my left. The Hellhound's Inferno Cannon makes short work of him. I don't need a hero causing trouble for me later. :)

I move up both my Command Chimera (the one with the Antenna), and the Plasma Vets for point-blank shots on the smoked Rhino full of =][= Stormies in front of me. I also move up the Sentinels for shots at the same Rhino. =][= smoke is tough to get through, so I wanted maximum firepower available. 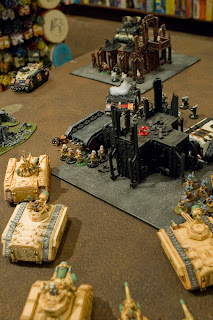 Q: How many shots does it take to wreck a Rhino with =I= smoke?

I fired 4 meltas, 3 double-tap plasmas, 2 multi-lasers, 3 Sentinel Autocannons, and finally the Demolisher Cannon at the damned thing before I got enough Weapon Destroyed results to kill it! Sheesh!!!

Meanwhile, I moved up the Vets from the wrecked Chimera for perfect shots at the back of the Chimera in front of them. They managed to blow off the turret and immobilize it. Forcing his PCS to bail out and move into the ruins.

On my left, the Russ spoke again and the Rhino on my left was immobilized. Hehe...

On his turn, Farmpunk moves the walking Sisters into ruins and gets off a perfect heavy flamer shot at my guys before charging the survivors. I pulled my casualties from the front to try and make it harder to get to them, but the girls rolled a 6 and dove right into combat. My guys lost the combat by 2, but held their ground. Which wasn't what I wanted with so many heavy flamers lined up all around them. Grrrr!

The =][= Stormies who got blown out of their smoked Rhino in the center now move up and lay into my command Chimera with their meltas, blowing it up. The Sisters in the immobilized Rhino to my left then get out and kill everyone in the Command Squad, save Colonel Lawrence. Who falls to his knees and thanks the Emperor for his Refractor Field.

The Chimera with the Plasma Vets explodes too, thanks to the PCS hiding in the ruins.

On my turn I have Colonel Lawrence order himself back to his feet and move him up into the ruins. The PlasVets then move back to the ruins behind the line to make way for the surviving Chimera on my right to move in and kill the =I= Stormies with it's heavy flamer, which it does.

Marbo pops out in the ruins next to the left-most Sister squad and kills 5 of them with his Demo Charge. The Demolisher then kills 3 more with it's cannon, causing the squad to run to within an inch of the table edge.

The Sentinels then charge the Sisters who are already in combat with my Vets on the right and kill 4. Farmpunk then loses the combat by two and... RUNS! The Sentinels run them down.

At this point it's pretty clear that the game is over, but we played out the rest of the turn before the game devolved into tactical discussions mixed with joking around. The Saint returned to earth and flamed the Plasma Vets, while the PCS and right-most Exorcist killed off the Sentinels. But after that Farmpunk was really left with nothing effective on the table. Marbo would surely finish off 2 Sisters, while the Saint was facing a fresh Vet Squad and 2 battle tanks.

Once those were gone, I'd be trading fire between the Russes and the Exorcists. Our bet was on the Russes, so we called it with the score at 6 KP to 4.


Farmpunk's error was pretty much the same as mine in the last game. He wanted to be the beatdown, even though he wasn't. You can't pop =][= smoke before the game starts, so all those transports were just sitting there waiting for my alpha strike to take them apart. I was able to stop 40% of his mobility before he even got to move.

I think that his best bet would have been to put all of his transports in reserve and come in later to threaten my far left flank. With a decent set of reserve rolls, he could have popped 2-3 of my tanks and forced my right flank to change course and double-back.

Or, he could have castled up as far away form me as possible and forced me to drive into his lascannons and Exorcists. But I think the reserves idea would have been better.
posted by SandWyrm at 1:40 PM