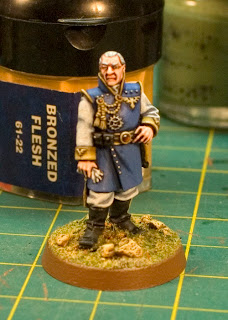 Farmpunk had some issues with an opponent of his, while I (for once) was really happy with the sportsmanship of all 3 guys I played. I have no complaints whatsoever and look forward to playing them all again.

While my game performance was lacking, I did win the painting contest with the Fleet Officer I finished up the night before (pic above). For the first time in over a year my whole army was painted, and I got many, many complements on how good it looked. I really went all out with new bases, unit numbers, and everything. I'll take some pics of the army later this week and post them.


My first opponent was playing Salamanders, so I'll call him SalMan. SalMan was running a mostly foot-based force with lots of plasma cannons, 2 multi-meltas, and a pair of Vindicators for support. 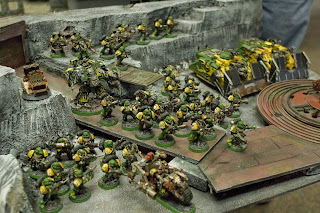 The deployment was spearhead, and I rolled first turn. There was one objective in each table quarter, and each one you controlled would add 2 Kill Points to your total. 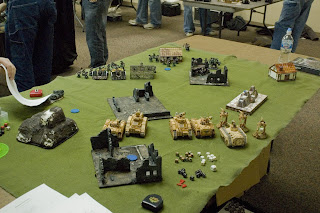 I did lots of damage to SalMan, but I concentrated (out of habit) on grabbing objectives first and Kill Points second. So, even though I had 2 objectives at game end to his 1, we pulled a draw. Had I spend less energy on grabbing that last objective and more on killing his guys, I might have been able to pull out a minor victory. Oh well...

I did like what Sal did with his Master of the Forge. He hung out on the far table edge for most of the game shooting conversion beams at me, but was able to scoot forward (being on a bike) on the last couple of turns to threaten an objective. Had I not been able to block his path with a Chimera, he would have stood a good chance of contesting one of my objectives late in the game.


This time I was playing White Scars in a more traditional capture and control mission where objectives came first and Kill Points would only be used to determine the difference between a minor win, major win, or massacre. I'll call my opponent "KhanScar".

I don't have a copy of KhanScar's list, but he had Kor'Sarro Khan + a squad in a Rhino, 2 tactical squads in Rhinos, 1 Tac squad with a lascannon in a Lascannon Razorback, and a Vindicator.

I rolled first turn again, and we had one objective behind some rocks in the middle of his table edge directly across from me. The other objective was near the table edge on my left.

And here was my mistake:

I'd never played against a Khan list before, so I didn't understand that KhanScar was outflanking 3 Rhinos. I thought he was putting those transports in regular reserve. So I set up assuming that he would be putting everything across the table from me in order to hold on to his objective.

When that didn't turn out to be the case I was caught flat-footed and I had to run reinforcements back to my objective when a Rhino popped out on that side. Out of the 3 Rhinos he outflanked, my Fleet Officer was able to deflect one onto the right side of the board where it couldn't do very much. But I still had to deal with Khan and a single tactical squad. 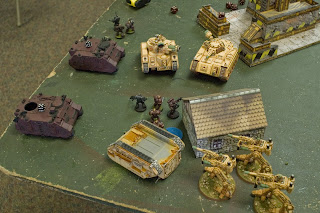 I sent the CCS, the Demolisher, and a troop Chimera down to support the Plasma Vets I'd left to guard the objective, but it wasn't enough. I killed Khan's squad, but the Demolisher missed the Tac squad totally (As in he hit the Chimera next to him) with it's Demolisher Cannon and I didn't get the extra turn I needed to run the Sentinels those last few inches in to contest it.

Across the table, I crushed his defenders and took the objective. Giving us both one objective at the end of turn 6.

The last mission was a straight-up annihilation with a Dawn of War deployment. My opponent was running Codex Marines. I'll call him SkullFire.

My setup was nearly perfect. His Land Raider and Rhinos were set up such that he would have to conga-line into my massed Chimeras from my right. With the Demolisher in the middle to hammer termies and the Russ to provide AT backup. On my left, I had the Hellhound, a Chimelta squad, and the Sentinels ready to take down his Vindicator and a Rhino. Really, it doesn't get much better in terms of setup.

And that's when my dice took a giant, steaming, corn-encrusted dump on me.

For the first 2 turns nobody died on either side. This hurt me more than SkullFire. As he had a chance to move his units up into position. Then the Termies got out of the Land Raider.

I still should have had him, but I kept rolling 1's to wound with my meltas. I poured at least twice the typical amount of fire it should have required to kill those Termies into the squad only to have the Chaplain and a single Lightning-Claw Termie walk out of it and smack my Chimeras around. All while Rhinos full of Tac squad were free to drive up and kill my Chimeras with single melta shots.

One of my melta Vet squads rolled three 1's to wound his termies, then on the next turn they rolled three 2's to hit his Land Raider. The Russ didn't kill or even stun a single tank over 7 turns of firing. The Sentinels did nothing to a Rhino for 3 turns. It was so bad our onlookers were wincing when I rolled. Ugggh!


When I was making my list, I went back and forth between taking Marbo or trading him and the Russ for a couple of Stormtrooper squads with meltas. In retrospect, I think the Stormies would have helped me more in the last 2 missions, while Marbo really only shined in the 2nd mission and the Russ didn't do a whole lot in any of the games.

The Fleet Officer (beyond winning the painting contest) was also of questionable use. He only helped me in 1 of my 3 games. And even then he only managed to divert one outflanking enemy squad. A demo charge for the plasma vets might have been a better buy.

Beyond that, I just need to get used to thinking in terms of the new mission styles I encountered today. As well as making sure I understand what's happening with the other guy's reserves. And hey, some of it was luck too. I drew 3 good Marine players. Had I played Nidkid again or the Trukk Orks, things might have been different for me.

I'll close with some pics of the other good-looking armies I saw at the tourney. The Albino Ork Trukk Mob definitely deserves special mention. Especially since the guy built an entire pedestal to wheel them around on! His Warboss won 3rd place in the painting contest. 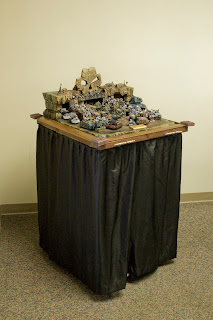 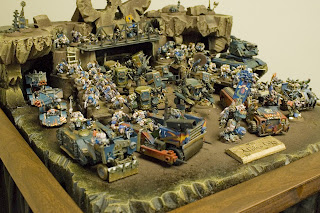 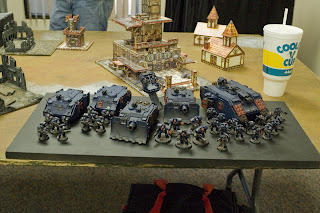 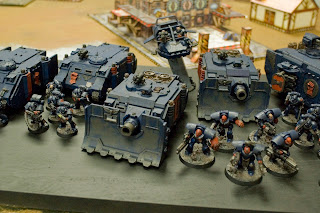 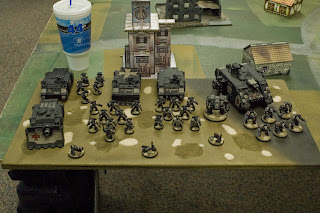