... sometimes the Bear gets YOU. 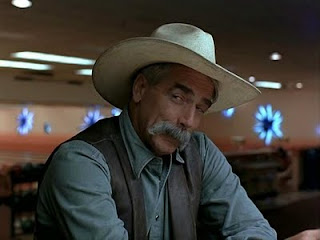 The Oct Fireteam Nova Tourney was well run and most of the guys were great. I have a good time when I go to their tourneys. Part of it is getting to harass Buckler and BlueMoon.

Sometimes you have a tournament where it all just seems to go slightly wrong. Like rolling 2nd turn on all 3 missions, like your opponent keeping track of time to allow himself to go first and last (because time ran out 2 min. before his turn was over), like facing a Black Templar force with 50Templar, and 7 total killpoints in a kill point only mission.

I also forgot my camera in my rush to get out the door. There was a tanker explosion about a mile from my house on the interstate Last Thursday, which shut down part of the I-465 beltloop around Indianapolis, and was going to slow my trip to the South side.

now I did almost masacare one poor Ultramarine player, which I did feel bad about. His luck happened to be worse than mine.

I'm not sure what place I took in the tourney, but it wasn't great.

I like the list. the platoon is meant to hold down home base, and put out some harassment fire. The rest of the list is allong the lines of a normal WH force. With the platoon to hold down the fort, and a platoon command to race off in a chimera to take an objective, I went with 2 Immolator Celestian meltagun squads.
I wanted more melta, and wanted more light tanks. Rhinos don't shoot enough. I also wanted the SoB squads to be primarially anti-infantry. I thought having a few fairly cheap units that could run straight at the enemy and still be a big threat was a good idea. yessir, I liked it.
I had considered not taking the Saint, and going with a jumpy cannoness at around 137pts or 152pts. The Saint is kind of an underestimated beefball. Marine players don't expect a WS5, S5, I5, old school hit-n-run, 2/2+ model coming at them with a crazy mastercrafted power weapon. Until she lays into a squad, sits 3 marines down, shrugs off 5wounds, 2power fists, and then skips away to let her friends shoot you up.

This was list was fun to play, and was pretty mean at the same time. It doesn't have as many tricks as my last Tourney list did (with DH Inq. Lord and Callidus), It was still effective.

FIRST GAME:
Mission: Seize ground (4objectives, one in each table quarter)
Set Up: Spearhead
Bonus points: +1 for controlling 2 more objectives than opponent
+1 for getting more KP's not from killing units than your opponent

My first game was against Mr. Pirate, and his ork trukk mob. One Trukk had plastic pirate ship sides on it, which looked cool.
He had 3trukks with slugga boys, 1 with shoota boys. I think each nob had a powerclaw, shootaboys had big shootas. He had a battlewagon with big shootas, and burnaboys with a big mek w/Kustom Force Field. The trukks all had rokkits. It wasn't a list I was afraid of at all. The trukk of nobs might be a pain as well, but I could take 'em.
We had a table with a building pretty much in all 4 quadrants, and one in the center.
I rolled second. suck for me.
I set up with the platoon in the building in by quadrant, to hold my objective, an exorcist out of LoS to the left of the building, and the PLCom Chimera to the left of it, to run out and claim the objective in the left side opposite building, and pop and trukks that got close to it.
The Immos went on the farthest right flank, with the flamer rhino and SoB chimera between the building and the Immos. the 2nd Exorcist was behind the building, ready to nose around and kill tanks, or Ghazgull.
From his setup, it looked like he was going to swing into the lower right quadrant to go around the building, and try to hit me from the flank, so I put a lot of flamers there.
He moved like I thought he would, and the game was going like I had thought out in my head. He killed the saint at one point, and she came back. The only problem came with how slow this guy was. (yeah, I can hear Chambers coughing and spitting right now) I'm not known for being speedy myself, but I've gotten much better since I started. At about 25min left, we finished Turn 3, with probably a minor victory for me at this point.
and I probably should have declared End of Game, but I thought perhaps my opponent would try to hurry up, so we could both get our turns in. In the end competitiveness won over being nice, I feel.

Game 2:
Mission: Capture and control (objective in our home area)
Setup: pitched battle
Special: Area between the deployment zones was 'no mans land', natural coversaves are 5+ there.
In game 2, I got to go to the bottom table. I played Rifleman. I went second again. goodie.
He had 3 tac squads w/rhinos. I think 2 of the tacs were flamer/multimelta. the 3rd was comabt squadded with a Lascannon in one squad, and fisty sarge, melta with an attached Libby (null zone, and Avenger) Then 2 dakka preds, and 3riflemen.
His first game had gone wrong as well.
I hid as much as I could from sight, using the SoB rhino as a wall to protect my immos. on my left flank, with the IG wrapped around a building in the lower left quarter. I set up an Exorcist in the left rear, and one in the right rear. hiding behind a big building in the right center of the board.
I put the two chimera over on the right center of the board.
It kind of went as follows... Chimera front armor is hard to get through, and the SoB rhino went down. the IG made a lot of saves, and my exorcists and IG were able to keep the riflemen held up until my Immos got to the other side, and blew things up. The Immos and Saint rolled up the left side, and ate his
Sometimes I'm kinda glad extra armor is too pricey for people now. It makes hiding from view, shuffling, and hitting things a lot easier. All I've got to do is keep hitting the tanks until I kill 'em.
Exorcists like to shoot AC12 and lower. The Saint can be a beast vs. normal marines. She chopped down the Libby before he got to do anything, then she hit-n-run out of the CC on his turn.
I didn't manage to dislodge one of the rhino's worth of troops from his objective, I contested it with an immo, but I definately held my objective.
Since I got more KP's, I got a major victory.

oh geez, not a combo I like. I was against Black templar as well. Even better. and I went second... again. and true to form, I never seize the initiative. While This was probably the most fun I've had losing in a tourney, it's still hard. The crazy men ran across the board quickly, as did their Land Raider Crusader (which I epicly failed to touch).
He had 7 TOTAL Killpoints. I had more. a LOT more. I guess I could have tried to play keep away, and run like silly around the board, but with a run move AND his Zeal moves for getting shot... I was gonna get caught.
I did manage to use a building, rhino, and an Immo to make a box canyon for the Templar to get caught in, and lines up the 2SoB battle squads to unload into them... only to have the Hflamer/flamer squad miss their divine guidance roll, and the Hflamer/melta squad to only get 1 '6' on to-wound. I whittled them down to 3 guys, who fell back, then charged me. *sigh*
I got the crap beat out of me. I came away with a Massacre loss, but Hubby was fun to joke around with while I took my beatings.


Overall:
Overall I had a good time. I enjoyed kicking the crap out of the Orks, even though I got bit in the butt by trusting my opponent to actually get through a turn in half an hour. Next time, we end the game real early at the end of turn3.
I think the time limits thing will get shifted next year, to allow for both players to finish equal numbers of turns. It's a little unfair to get to go first AND last.
I would have fared much better had I gone first... at all. I can't seize initiative worth a crap. I'm not close to statistical percentages. People seem to sieze on me often enough though.

I hope I do manage an invite to the last tourney, hopefully it's not on a weekend I can't attend.

Also,
if anyone ever wants to pick up a game with Sandwyrm or myself here in the Indianapolis area, post on the Blog. We read all comments, and can set up times to play. Heck, let us know, and we'll make sure the North FLGS has stuff set up for a Wed. night game.