Hard to leave home without it.

For each of my Armies, WH, DH, and IG, each has it's own toy that's not required, but is oh so good, and I have a hard time not taking it.

WitchHunters:
it's gotta be the crazy Exorcist tank. 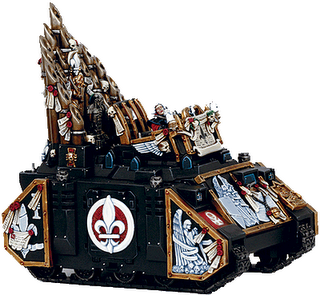 While the Exorcist isn't extremely reliable (d6 shots that still need to hit?), it's a box of rockets that finds its way into every WH list I do. 2 of them in fact.
Termies dropped on the field? yum.
Monsterous creatures lumbering your way? yum!
Independant character or small elite retinue coming your way? yippee!
Light armor got you down? yum!
Heavy armor?.. well, don't get your hopes up. actually, shoot at something else.

I can usually find good targets for my twin Exos in every game, and even though Marines get a better buy from Dakka Preds, and IG gets a better buy from a vanilla Russ, I still take the Exo for the unique roll it fills in a WH force. Long range heavy support.
Plus, I always run 2, and usually keep them in tandem. If one whiffs, the other one can finish the job.


DemonHunters:
These guys just don't get too many neat options. The Land Raider Crusader is nice, with the antique rules left over from bygone eras.... like the Hurricane Bolters can always fire... Good PotMS... Heavy3 non-rending Assault cannons (can't win 'em all), Pintle Multimelta and E. Armor for free. It's a giant handbag for be to put a lot of GK bricks into, and slap people with.

Between the LRC and the Inq. Lord dakka squad, I usually have 1 or the other, oftentimes, I have both. Both of those have roles to fill on the battlefield.


Imperial Guard:
This one is harder for me. Since IG changed, I've not played a lot with them. It really depends on what flavor I'm going for, but one thing usually finds it's way to plop down 65points for:
MARBO GIMPY.

yup, everyone's favorite mush-mouth. not only is he a nice ghetto asassin, he's gret for making jokes during the game.

so there's my 3 for each of the forces I play.
Exorcist, Land Raider Crusader / DH inq. Lord dakka squad, and Marbo gimpy.

Sandwyrm's pick:
Sandwyrm told me what I kinda knew already, but I really wondered if he'd go with Autocannon sentinels for his must have. Sandwyrm went with Le Soldat Marbo: 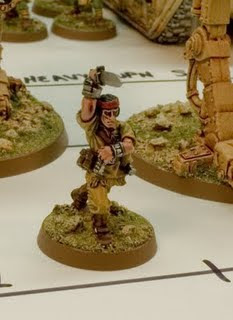 and a good looking choice he is.