Anybody remember the 1500 point army shown in the picture above? That was the Tallarn 13th company back in March when I first posted for the Back 40K. It's hard to believe what a difference just 8 months and a new codex can make. In that time, I've gone from a 1/3 unpainted infantry gun line to a fully painted mechanized force that, oddly, fits the Tallarn fluff better than the old one did.

Here's the army now, displayed on the same carry board I originally marked up for that old force (Hence the odd labels on everything.):

First up we have the Hellhound, Marbo, and the Sentinels. 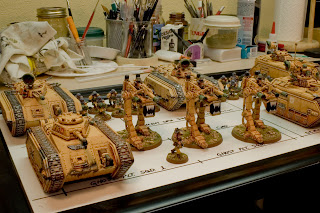 The Hellhound is a custom conversion I made from a standard Chimera kit. I always imagine the promethium spilling out very sloppily all over the front of the tank when it fires, so I worked in some areas where the various spills had burned away the paint. 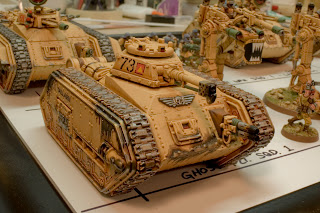 The Sentinels are old 2nd edition metal models that have had the assault cannons replaced with 2nd edition metal lascannons, which I usually say are autocannons. The teeth were originally a justification for the "Hardened Fighters" doctrine in the last codex. But they looked cool, so I left them on when the new codex came out. 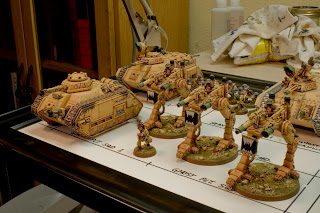 For Marbo, I use the "Shiv" model from the old "Last Chancers" box set. Oddly, the handcuffs make sense. I mean, you don't just let this guy run around between battles. He's crazy! What if he hooks up with an Imperial Assassin or something and they have kids? 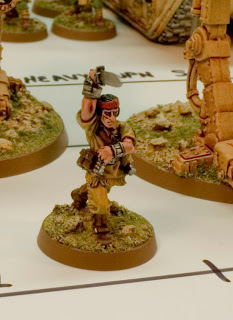 Next up is my Company Command Squad. Colonel Lawrence is a Forge World tank commander model that I fitted with some cut-down Cadian legs. The three Chimeras you seen in the following pics are custom Chimera conversions that I last talked about here. 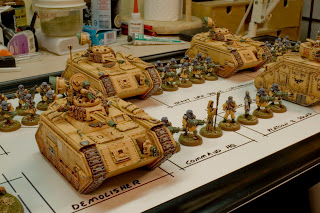 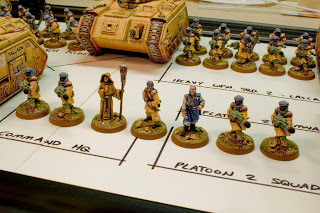 If you haven't noticed already, ALL of my models have painted eyes. Well, except the Astropath. :) 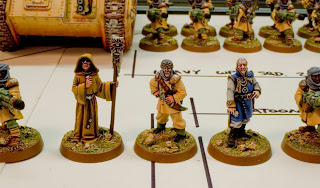 And here's a shot of the backs of those Chimera conversions... 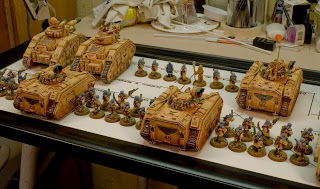 The Demolisher is the same model that I won the last local painting contest with. Since then I've added a searchlight to comply with the IG5 standard loadout. I also swapped the lascannon for a heavy flamer and made the model a bit tougher looking by adding track guards. 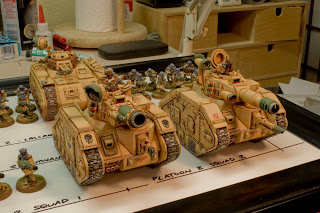 The Russ started out as a Vanquisher conversion that I did years ago. But when I got back into 40K last year I converted it back into a regular Russ. The track guards were a custom conversion that I did in '98 when there weren't any in the standard GW kit. This model also had a coaxial storm bolter at one time, which I recently converted into an additional searchlight. Oh, and since the original model had a hull Heavy Bolter, I fitted the model with a Cadian Lascannon instead. 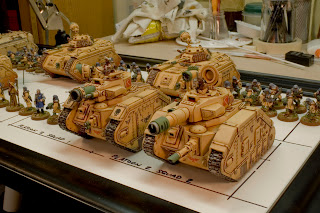 I'll just show this one infantry squad up close rather than all 4 of them. The lasgun troopers have been done for quite a while, with some going back 10 years. But I did do a big melta upgrade in the shift to 5th edition. And I re-based all of the infantry last week to match with my much cooler "rocky grass" look. I also went through and gave them all unit numbers. Yes, I am a bit crazy. :) 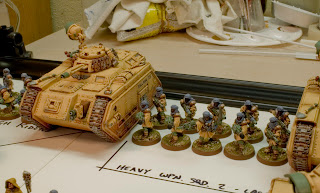 Last week I also took care of a problem that's been nagging me for years. The stock Tallarn Sergeant model always came with a Plasma Pistol instead of a standard Las Pistol. So I cut those off the models and replaced them with the overly large Las Pistols (Really more like Las-Carbines.) from the many, many, tank accessory sprues I have laying around now. :)

1) Finish painting the other Hellhound I converted.
2) Paint 3 more Melta Guns for my Stormtroopers and swap a sergeant's plasma pisol for a HS Las pistol.
3) Rebase all 20 Stormtrooper models I have to match the new look.
4) Finish converting my Hydras and get them painted.

5) Start Tau.
6) Finish Converting the other 2 "Set Back" Chimeras I've started.
7) Paint up 2 more squads of infantry to put in the new Chimeras.
8) Paint up Ox from the Last Chancers to use as Harker.
9) Paint up another Autocannon and some Grenade Launchers so I can field a platoon if I want.
10) Patch up the sponson holes on my other 2 Russ Models and put a Heavy Flamer on one of them.
11) Paint up the new Demolisher turret I bought from Forge World so I can take 2 of the beasts at once.
12) Get serious about Tau.
posted by SandWyrm at 8:31 PM