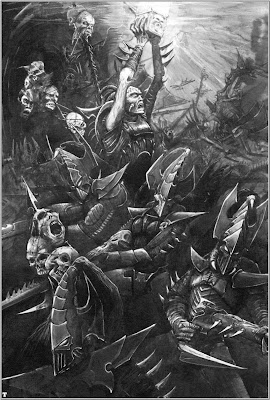 There comes a time, every few years, when the dark things run rampant, where creatures of shadow dance and play, and where the night can consume your very soul.

Yes, friends, I speak of that (semi) freak occurrence, Friday the 13th.

And no, I'm not about to dress up in a sweater and old had and claw at you in your dreams.

The Halloween season in general is rather fitting of the army, but nothing quite captures the true feel of the army as that ominous Friday. The reason is fairly simple; Halloween comes every year. It is expected, planned for. At least for me, those occasional Fridays-of-note often tend to sneak up unannounced.

And this is the serene beauty of the Dark Eldar.

A quick recount - though I hope I've been able to educate most of you to the general nature of the race.

Dark Eldar require slaves (more specifically, souls) to survive, because their own are being constantly leeched by She Who Thirsts (bet you can't guess which chaos god Eldar fear/hate more than any other...).

Whether the souls are drunk to replace, or to shield their own souls, is up for debate... perhaps it is a bit of both. Suffice to say, it's a source of nourishment, a requirement for not only life, but the avoidance of a fate far, far worse than death - an eternal torment of the highest magnitude by the god(ess) of all perverse pleasure and pain.

Torture, villainy, and other such cacophony is not only downright fun, but it also enhances the soul. Souls are excited by extreme emotion, one of the most potent (and easiest to induce) is fear and/or pain. As a chef (hence the by-line tag, if you hadn't looked closely), I can appreciate wining and dining on the finer things.

Now, why this rambling affront to all things well and good? First, Games Workshop has done a sad job of spreading the good word of the True Kin to ears not their own. Secondly, it makes this next part come to light a bit better.

One of my, if not the favorite, fluff pieces in the codex is about Devilsnaucht. A speaker - an old, frail man having lived well over the normal life expectancy - is warning those of his colony about the oncoming "holiday". While they prepare to flee and hide, he warns them of the false security of their actions. Those enigmatic pirates who come only to enslave and torture, who can not be turned or bribed away, will track them, hunt them, find them. There is no hope, no chance of a serene future or a miracle. There is only the bleak despair of certain doom.

How did such an old geezer get to be so old, geezery, and for that matter knowledgeable? They let him. They let him live. They, in fact, drugged him so that he could live well beyond his allotted years, so that those of the next generation and the one after would have a harbinger, a warning, a dark spark of the infinite gloom that is their fate.

One to tell them how futile their attempts are. One to remember, and to rekindle the fear of that night, long years ago. One to keep the waking nightmare alive.

One to foster the fear that will make their souls so ripe for the plucking.

But I didn't just come to weave tales of one of my favorite bits of fluff. I also come to share a bit of dice-voo doo about that fateful eve.

I, my friends, am unstoppable during this time. I do not say this to boast, for I am hardly a master tactician. I consider myself and my army imbued with the very forces of the universe during this once-in-a-blue-moon celebration.

The latest outing, which actually happened the Saturday (and very early Sunday) after, left me with two victories (and a few more slaves) under my belt. The first a rousing kin-strife battle. I was able to surgically remove his scoring elements, and then hold (just barely, but it counts!) an objective until the end (in truth, less than 10 figs out of 1k on each side were left... we came very close to tabling each other in turns).

Next up was a feast of Catachans, who were foolish enough to deploy within striking distance of my Raiders. Note to world - first turn charges are nasty. I will fully claim some good luck (including two failed Counter Assault rolls through Straken), but what else is to be expected when the moons are aligned in my favor?

My favorite part, though - the slaves dragged back with me (truth be told, I'd rather tie a game and take away some good slaves than to score a solid victory). A few Guardians removed from their jetbikes, a few guardsmen, and the crown on the pile of new playthings - Col Straken himself, *and* his pet Ogryn Deddog.

So I leave it to you - are there any times of the year, be they seasons, dates, or self-styled holidays, that resonate with you or your armies? When can you claim invincibility above all opposition?
posted by Anonymous Foodie at 1:30 PM