How To Felt A Game Board 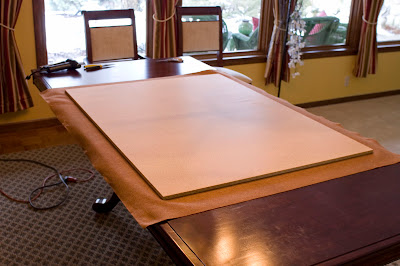 I've been wanting a felted game board ever since NOVA 2011, when I saw the really nice ones that Mike and his crew put together. Fast forward to the Indy Open last weekend, where I saw a nice mottled-brown felt on one of the tables that struck my desert-loving fancy. After finding out where Spag got it (Jo-Ann Fabrics), I set about making my own felted table today.

It occurred to me though, that many folks might not know how to properly stretch felt over a table. So here ya go! This is something that I learned stretching canvases the first week of art school. :)

I had Lowes cut my 4'x8' sheet into two 3'x4' sections, and one 2'x4' section for portability. I need to be able to pack my table into either my car with the back seats folded, or my wife's SUV without having to leave the kids' car seats at home.

I bought 3 yards of the mottled brown felt that I liked for the two 3'x4' sections, and a mottled grey felt for the 2'x4' remnant.

My wife had an electric one already for her crafts. Though why it needs to be able to fire full-auto is beyond me. :)

It came with 1/4" staples, which worked fine. I wouldn't use anything longer for this unless your board is thicker.

For pulling out staples that don't go in flat. Or when you accidentally fire off a burst and you have 3 staples on top of each other.

For cutting the felt. Make sure they're sharp!

You're going to need at least one hour, and preferably two, to get this done. It's not particularly difficult, but it is time consuming.

You'll need to be able to lay the felt out flat, with the particle board flat on top of it. A table or smooth floor will work best. Don't do this on a carpet or rug, because you need the felt to be able to move when you pull on it. 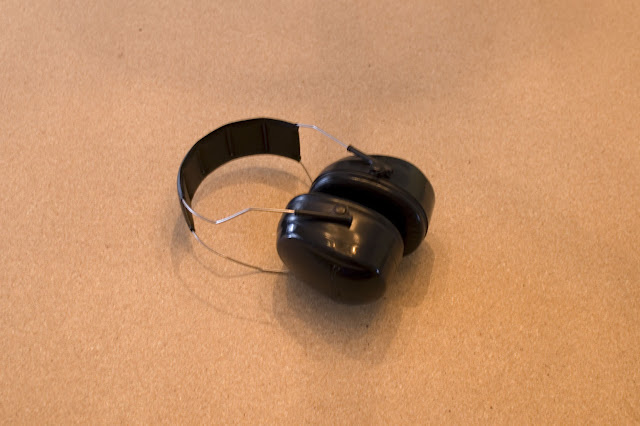 Electric staplers are LOUD. Don't forget an extra pair of earmuffs for the sick wife, who'll be crawling up the walls without them. ;) 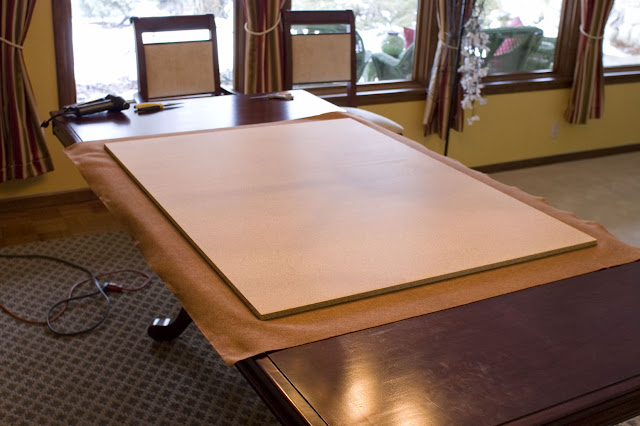 Smooth the felt out as best you can, then lay the board on top of it. You'll then need to cut the felt so that you have a roughly 3" border all the way around it. 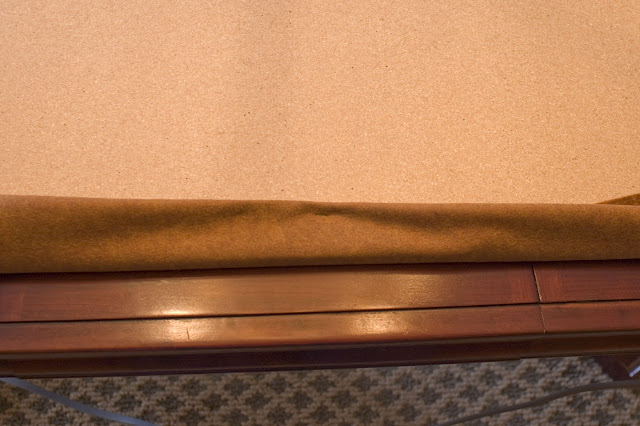 Pick the middle of one of the long edges. You want to fold the felt back on itself, so that the ragged end is out of sight under the fold. Make sure the felt is pulled taut, and sink a stable to hold it there. 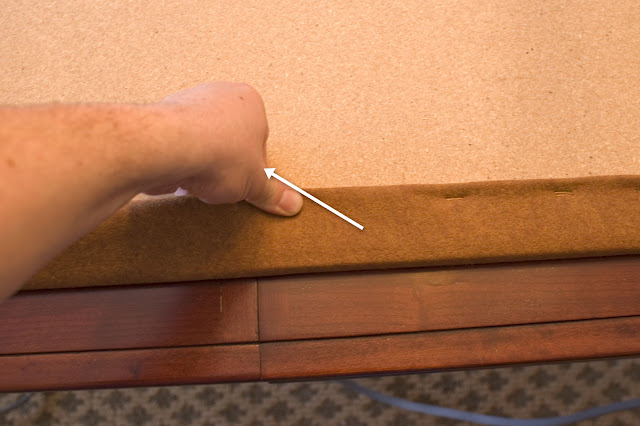 As you go, you want to pull the felt taut before you staple. But you also want to pull towards the far corner too. This is to keep folds from appearing along the edge that you're working on.

Don't pull too hard yet, as you don't have the other long edge stapled yet. If you're moving the board, it's too much. 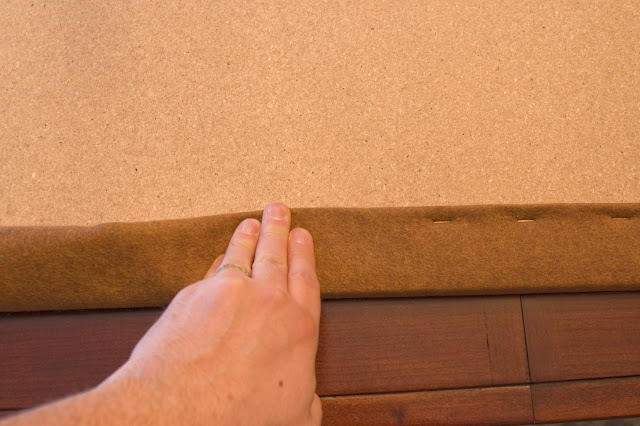 Keep going. Doing this job right means putting your stapler down between every staple. Since you'll need both hands to fold and stretch the felt properly. If you go too fast, you'll get folds and creases in the felt.

Your fingers are going to be tired after this job. Not your hands or arms. Else you're doing it wrong. 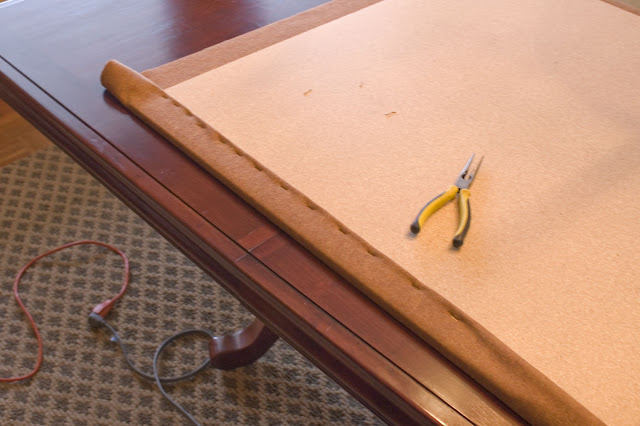 Go right up to the short edge. Then do the other side. 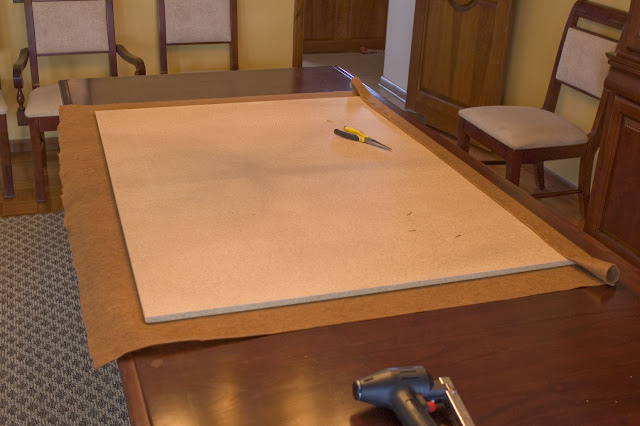 One side down. Time to do the other long edge. 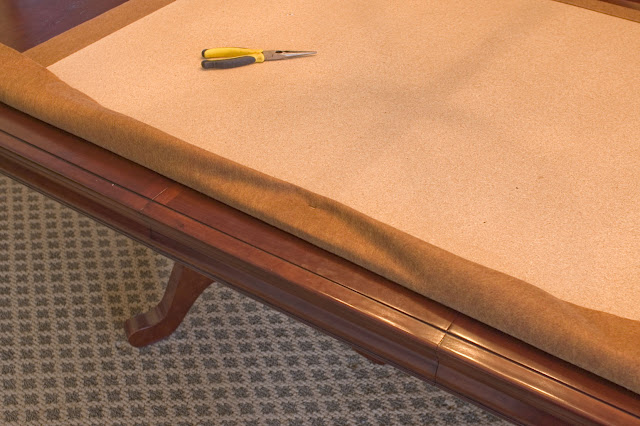 We'll start again just like we did before. With one staple in the middle of the long edge. This time though, we're going to be pulling harder. Because the other side is already stapled down. You should be able to pull the felt out another inch from under the board when you tug on it. Hold the board with one hand and pull the felt taut with the other. Then fold and staple. 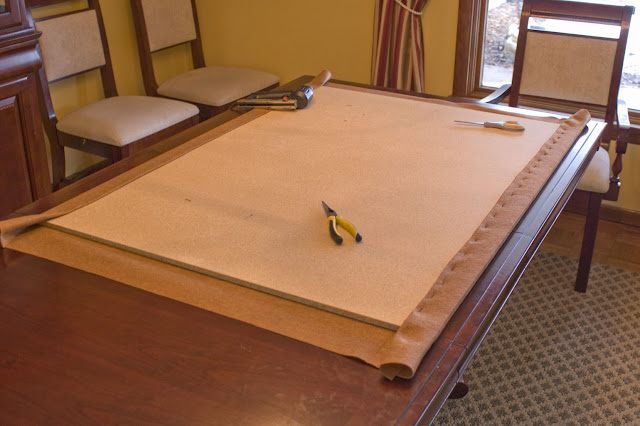 Here we are with the two long edges finished. Time to do the short edges.

Do these just like the long edges. Start in the middle with a staple and work your way to the corners. Don't pull as hard on the first edge, as you do on the opposite one. 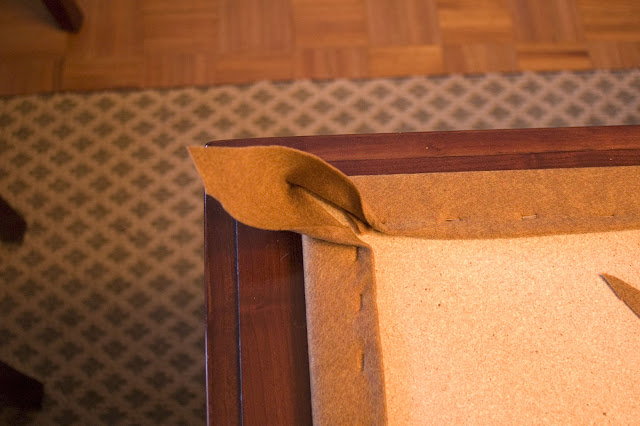 Eventually, all that will be left is the corners.

Take your scissors and cut off the inner fold from the corners as shown. DO NOT cut a V-notch into the corner, or just cut off this tail. Or else the felt will tear there after a few weeks. You want the corners to be completely covered and in one piece for maximum durability. 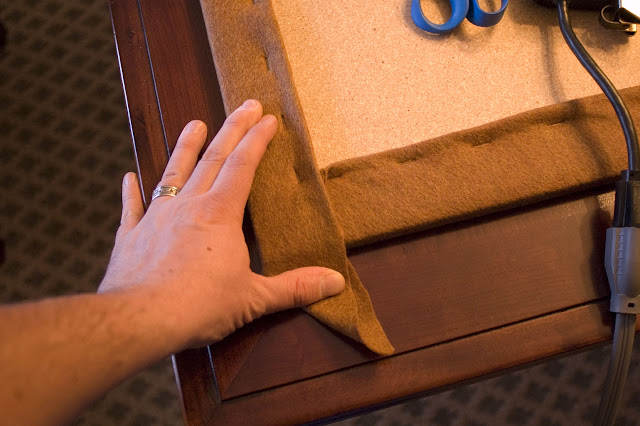 Keeping the felt pulled taut, take the corner and fold it to one side as shown. Then fold it back on itself in a sort of accordion fold. 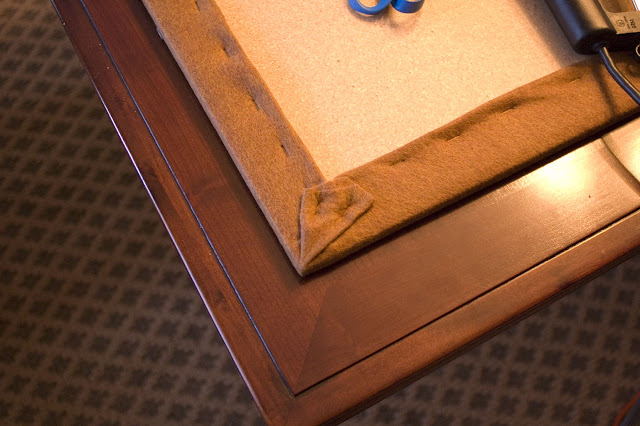 You should end up with a sort of diamond shape, as shown. Sink two staples to hold it and cut off any extra felt that pokes out towards the uncovered area of the board. 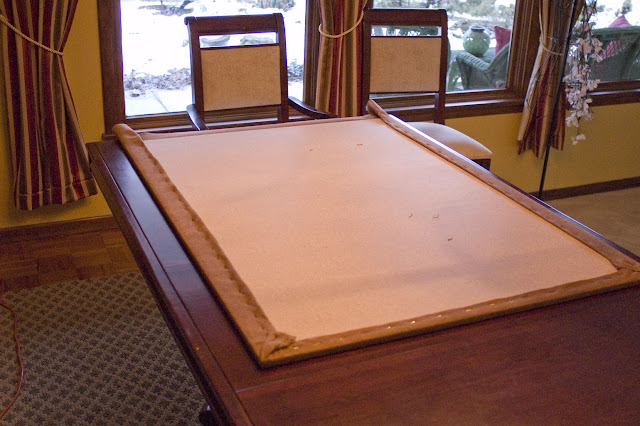 Here's a pic with 2 of the corners done. 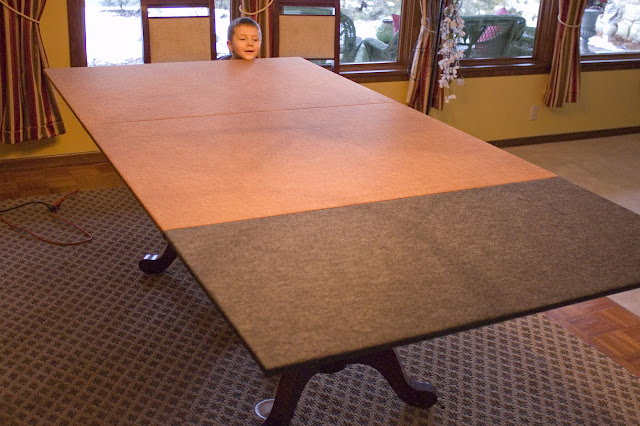 Finish off all the corners and you're done! Here's my two 3'x4' sections, and the 2'x4' side-board ready for play. No wrinkles anywhere! 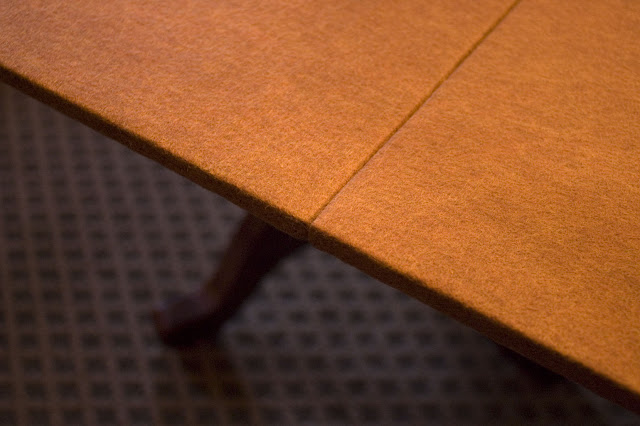