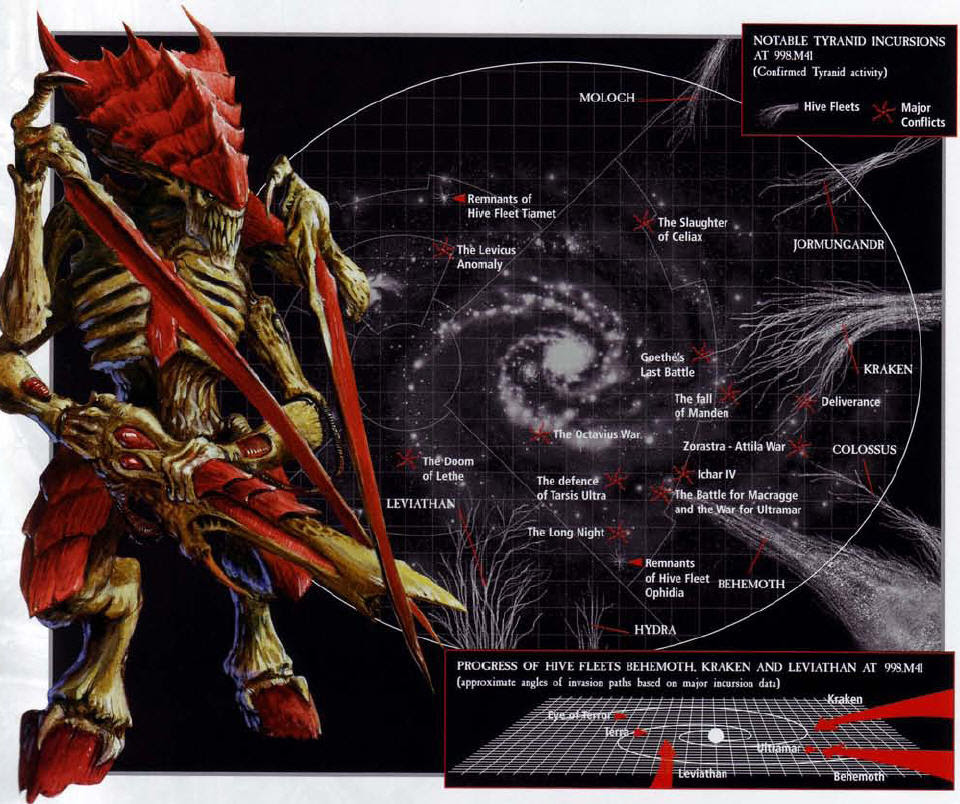 With a flash of rumors hitting the scene, it's time to start thinking about my first love - the Tyranids, and one of the things that has plagued them throughout the editions.
I won't go into what rumors are currently circulating (use those Google skills if you're interested).  It's far and away earlier than we've been getting any reliable leaks from the past few releases, but then again I've also heard that the main source has been regularly reliable about past Tyranid codexes (or codecii, if you prefer).

I'm sure I'll spout off more about these rumors as we get closer to the actual release date, and by nature, actual truth - but for now I want to touch on something that has, on and off, been a problem with Tyranids.

And that something, my friends, is assaulting into cover without grenades.
The previous codex allowed for most critters to at least buy Flesh Hooks, which acted as assault grenades with an additional benefit (a rather fluffy, fun one at that).  But those were the days of yore, and the days of now say "No!" to such frivolities.

Now, firstly I want to say this, loud and clear.  Not everything should have grenades.  If everyone has grenades, why even bother with the initiative penalty for assaulting through difficult terrain?  I will go further to say not all assault-based units should have grenades, because that's close enough to the prior idea (how often do shooty units jump into combat?  Answer, not - and typically it's a speedbump attempt at best).

So, in the end, no - I don't think Tyranids should just get grenades on everything.  Sure, Lictors should keep their flesh hooks.  But the lowly hormagaunt?  Not at all.  Tyranids should function on their own tactic, and that is the tactic of acceptable losses.

6th helped out with this idea quite a bit when being fearless in combat stopped being, largely, a detriment.  Well, it was fine if you were a power-armor wearing, dual-lightning claw toting, CC stompfest... but when you were a moderate combat threat that was designed, DESIGNED, to win by sheer attrition (and be points-effective at it), the old Fearless mechanic just stomped you down.  Especially when suddenly those same wounds were applied *twice* if something good actually joined you ...

... a quick derailment for anyone who may be unfamiliar with how this worked - say you had a brood of gaunts, and then a Hive Tyrant, in combat with a unit of Terminators (the Tyrant jumped in to actually kill them while the gaunts had been there to hold them until he got there).  The Terminators curb-stomp the gaunts, killing... oh.... 12.  The Tyrant drops a respectable 3 Terminators.  The Tyranids lose the combat by 9.  "Who cares!?" they cry, as they are a fearless machination of nomlishiousness.  Oh... wait... you mean that's 9 armor saves that the remaining gaunts have to make, likely destroying the rest of the unit?  Well that kinda (ie, really) sucks, but at least I have my... my.... wait... you mean because the Tyrant was in the same combat he has to take the same 9 saves that my gaunts did???  So he loses (average) 3 wounds despite never having been touched in the combat??  Yeah.  Yeah that just happened...

But I digress.  That mechanic, thankfully, is a thing of the past.  And Fearlessness is next to Awesomeness in terms of things actually working like they should.  So finally, like in past editions, Gaunt swarms are fully able to enact upon their role of fodder.  No, they're not the best fighters (well... we'll get to that bit later), but they will drag you down via attrition.  And they're cheap enough to field swarms large enough to accept the necessary losses to do so.  I have many a time thrown a unit of 20 hormagaunts into a unit of 5 terminators, only to walk away with 7-8 gaunts remaining.  Sure, you killed twice as many guys, but yours cost 7 times what mine do.  And I still have a (slightly) functional scoring unit.

It works.  And it works well, if the army is designed to work that way.  In large part, Tyranids are.  There are, however, some oddballs still present.

Let's compare Gaunt genii... Hormagaunts are the close combat aspect, while the lowly Termagant is the "shooty" variety (carrying the equivalent of a bolt pistol hardly constitutes a Shooty unit, but I digress).  Fun fact, Termagants can sport full combat upgrades (poison attacks, furious charge, huzzah) for about as few points as is literally possible (outside of "free"... unless you take a Tervigon, and then just being near the momma-bug can, in fact, give you free upgrades).  Hormagaunts on the other hand pay enough that if you take the same upgrades, you're suddenly looking at a double-digit points cost.  Ask around, and see how many people want to pay double-digits for a T3 5+ save critter.

Hormagaunts suffer from the singular problem that as soon as you give them the upgrades to still do some damage after the initial acceptable losses, those losses have, actually, become too expensive to be acceptable.  Despite some cool combat-based upgrades, a speed boost, and other shenanigans, Hormagaunts have steadily been replaced by Termagants as my close combat troops.  The cheapness and potency of lots of (maybe) S4 and (at least) poisoned attacks is just... well... too potent to be outshined by the higher initiative, and even the bonus attack.

Because that higher initiative rarely matters.  Because once you equip them to do actual damage, you can't afford enough (without spending silly-points) to properly attrition anything (even as the necessity of attrition warfare curves down).

So... I come back to the original point - do I want grenades (or a flesh hook lookalike) on Hormagaunts to really make them the assaulty gaunt?

No.  I want them cheaper.  I want upgrades to be as cheap as for Termagants.  They need to be potent in combat, because they *will* take losses, and they need to be cheap to afford the bodies to accept these losses.  They were meant to be a swarm.  Make it so.  Don't just hand out grenades to everything to nullify the rules you wrote in the first place, give some character, give some different worldviews - bring different, viable tactics to the table.

All that said... what about the other bugs?  Warriors... well.  Unless you're charging them into a unit full of power fists, they're probably alright.  They're moderately durable, and have enough wounds to choke a donkey.  Although I wouldn't mind them getting a little nastier in assault without having to pay out the slathering, drippy nose for bone swords and lash whips.

Monstrous Creatures?  As much as I'd like to see them stomp through forests willie-nillie without a care, the same thing is pretty true here.  For the most part, they're going to shrug off basic damage.  Yes, large groups of S8 ap2 weapons hurt, but they hurt everything.

Genestealers - here we have a conundrum.  This is a critter that actively relies on a high initiative to get the job done.  They've been toned down enough that they really don't stand out that much vs a lot of other combat units.  Harlequins have basically the same offensive stats, plus a slew of other special rules and abilities.  Basic assault marines tote guns, jet packs, and actual armor values.  'Stealers are also about the only Tyranid unit, in my mind, that *really* cares about overwatch.  Individual kills really hurt the unit.  They're not cheap like Gaunts, especially if you give them Toxin Sacs or the like to make their damage output (almost) match the older versions.  Charging into cover is a death sentence, as their defense is (supposedly) "kill the other unit first".

But still, are grenades the answer?  Maybe not.

'Stealers are, canonically, known to be whiplash fast and furious when it comes to combat - and when it comes to getting there.  They're renowned for their Space Hulk combat actions, where they will literally burst out of the walls/ceilings/floors and eat you dead.
Kinda sounds like they should be pretty good at navigating a few trees, don't you think?

They could have "inhuman reflexes" that simply allow them to assault through difficult terrain without penalty... and while I don't want to hand this effect out everywhere, having a unit or two with a grenade lookalike is not necessarily a bad thing.  At the very least, an Initiative test to avoid the penalty would be fitting, I think.

As more rumors come to light, we'll see what direction our favorite gribblies will head toward.  They may all be batch-produced nigh clones, but at least they're clones of themselves, not more imperials.  Let's try to keep it that way, yeah?

posted by Anonymous Foodie at 11:26 PM