War Dogs Don't Have To Be Ugly 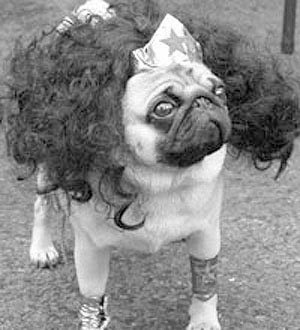 Like Farmpunk, I've been getting ready for the tourney this Saturday. Part of that has been the process of getting my new Hellhounds ready. They're just too useful a tank not to have, and I should have gotten some a long time ago. But I just could never bring myself to buy the stupid looking model that GW makes. You know, the one with the goofy metal turret bits and the barrels stuck onto the top. Especially not for a $10.00 premium over the Chimera model it's based on. So I continued to ignore it, even though I was losing to Ork hordes on a regular basis.

I toyed with the idea of buying one of the Forge World versions, and they are better. But they're really expensive, and they still have a goofy looking promethium tank on the back. Every real life flame tank I've seen pictures of looks like a perfectly normal tank. They put the fuel storage on the *inside* where it's less likely to blow up when the enemy is shooting at you. Fancy that.

Then the new codex came out and not only did the Hellhound get a boost, but there were some new illustrations which hinted that a new model was in the works. Woohoo!, I thought. This time they'll get it right and I can buy!

Well, maybe not. Click here if you haven't seen the new model yet.

Now there's going to be hoses coming out the back of your turret. Which, it seems to me, would ah... interfere with the whole idea of TURNING THE TURRET AROUND!

So it became obvious that if I was going to get to use some Hellhounds and keep my self respect I'd just have to convert my own from some Chimeras. And here they are. Enclosed and a bit smaller than a Chimera. Which, you know, they should be since a Hellhound is a fast tank and the Chimera isn't.

The inferno cannons are a combination of the autocannon and heavy flamer from the new Sentinel kit, with some plasticard added. The Multi-Meltas are made from plasticard cylinders added to chopped down heavy flamers bits. The melta slots were made by heating up a small precision screwdriver with a candle and then pressing it into the cylinders. I also added some brass wire to simulate a hose underneath since most Multi-Meltas seem to have that. The turret also had to be raised a bit to accomodate the larger weapon. Which is the reason for the armor band around the bottom.

The fill connections for the internal promethium tanks is below the rear glacius, where I used some bits from the heavy weapons teams to simulate an external fuel pump and electrical box. The diesel drum and crew gear bits were added to help visually separate these puppies a bit more from my Chimeras so that my opponents don't have cause to complain if they get the two confused.

Enjoy the pics. I won't have them fully painted for the tourney. But I should at least be able to get a simple base color on them with a MinWax wash before then. That will give me something presentable that I can refine using my usual tank painting methods later. 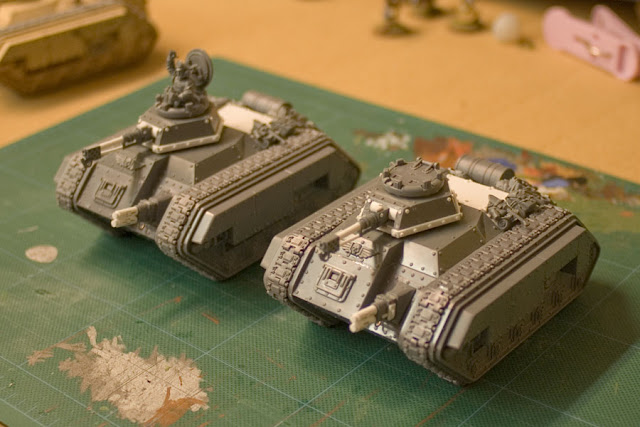 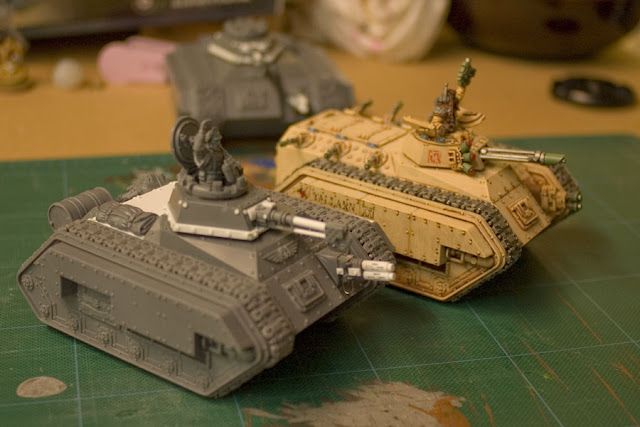 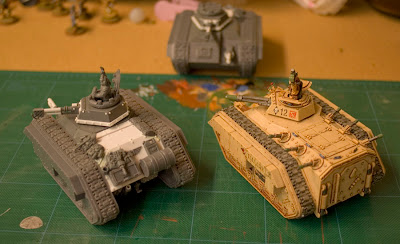