Odds and Ends in the Wee Hours 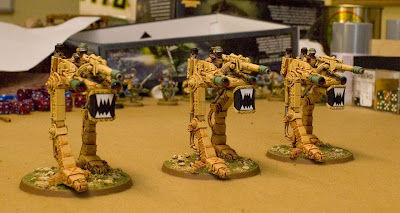 Tourneys always take a lot out of you. Work and chores pile up. And the family wants some attention too after you've ignored them for a few days. So, I'm essentially grounded for the week while I get everything caught up.

But, I've still got a bit more than an hour to myself in the late evenings before I go to bed. So I've been using that time to work on all the little things that are unfinished on my models. Things like weapon conversions on my tanks and Sentinels. I usually give them at least a base coat and a wash. But eventually I need to go in and finish up by doing some drybrushing before I pick out the details.

And so, I finally finished off my old 2nd edition Scout Sentinels on Monday and Tuesday. The bodies have been done for a while. But I was waffling between autocannons and lascannon conversions for them. Post-Tourney, I've finally settled on the lascannons (Though most people wouldn't blink if I called them something else.). And so I finished them off with a nice paint job.

The cannon models are metal 2nd edition infantry lascannons with the backs cut off and some greebling added. While the teeth plates are a piece of Chimera track guard held on by one of the hydraulic supports for an IG snow plow. The teeth plates started as a justification for the hardened veterans doctrine in the IG4 codex. The idea was that the plate would push forward at the command of the driver and knock an enemy to the ground where the could be stepped on. When IG5 came out and HF went away, I took them off. But I liked the look so much that I brought them back. If anyone asks, I'll just say they're for scaring orks. Grrrrrr!!!
posted by SandWyrm at 12:46 PM