mine goes to 11th 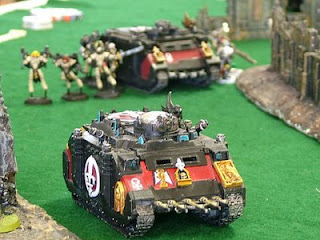 My girls in action.

Fireteam Nova Tournament:
Buckler and the boys did a great job to put together a large tournament like this. There were a lot of people signed up. I believe there were 34 entered to play, and a few more showed up to watch.
I had a good time, playing against some nice guys. It's also refreshing to see people at adjoining tables having good times as well. Even if their army was getting a thorough thrashing.

I faired well. Not as well as I had hoped, not as high as I COULD have been if I'd been a little more bloodthirsty, and vicious with faith. I had a good time, and my opponents all said they did too.

I don't have an official breakdown of the number of specific armies. I know there was 1 Eldar, no Dark Eldar, 1Tau, 3 Tyranid, 3 WitchHunters, 1 DaemonHunters, 4Imperial Guard, 1 Daemon, and 3Orks (I think)
The rest were Marine or Chaos. not a bad mix, I think.

IG being the new codex made a strong showing. I was hoping to face more psykers than I did. My psychic hood went mostly unused again. I got some excitement with 'nids, but no real action, like Daemon Princes, or Farseers, or IG Psychic Choirs. I was hoping to get to use the hood to block IG psycher squads. I woulda been good at it too.

my list was as such:
1500pt WitchHunters list for FTN Tourney
I wanted a balanced list, that would be a good all-comers style list. I wanted at least 3 troops, 1 disruption (callidus) which also happened to be my elites choice, 2 Exorcists, some anti-psyker, and anti-DeepStrike (Inquisitor Lord Dakka squad). I knew I'd need a Fast attack, and I would need more anti-tank, which became the IST's fallback role, after holding my home objectives.
Thanks to Chambers for helping me sift through my 3 forces, and come to a list that could be a good all-comers multi-purpose list.

Game 1: Marines
My first game was Marines. Dawn of War, capture and control (5objectives), Ship didn't know the rules real well, but we actually didn't have any problems in our game. We both were pretty straight forward with what we were doing. I pulled a punch or two where I shouldn't have. I had one opportunity to use Divine Guidance on a tactical combat squad, but didn't, thinking the weight of fire from a full SoB squad could kill them off, and there wasn't a power weapon or powerfist in them, only a melta. none of them died to my fire, and they bogged me down, keeping me from claiming one of his objectives. He also did a smart thing, and jetted a razorback onto my objective with IST's on it. The razorback got lucky, and withstood 2 meltas, and an exorcist to be immobilized, but still contest my home objective, otherwise, I'd have pulled out a Major victory for claiming 2 of the 5 objectives, and contesting 2 more. He had none. He would go on to be Sandwyrm's 2nd game.
Minor Victory 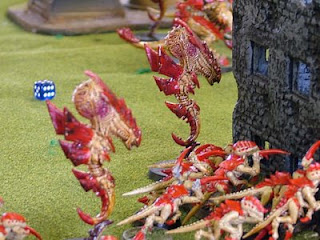 Game2: Tyranid
My second game was big bugs and gribblies. This guy was Sandwyrm's first game. I was glad to see bugs with corner deployment, and 2 objectives. I knew I could probably leave my IST's parked on my home objective, and if he DID charge me with troops, the Inquisitor could shoot them to bits. easily. The Zoanthropes I thought might cause me trouble, as might the shooty tyrant with guard. The shooty 'fex was going to have to go as well. The Exorcists were going to serve me well on this game. Shelia was the suprise star however. as the bugs kind of hunkered down in the building on his objective, She tore things up, killing 2 Zoanthropes, a bunch of spineguants, and putting some smack down on an elite CC fex. It took 16 hits to take Shelia down. She was on fire. definately earning her gold cookie, by distracting much of his force, while the exorcists shot things up, then one SoB squad charged forward to torch spineguants and contest his objective.
Major Victory 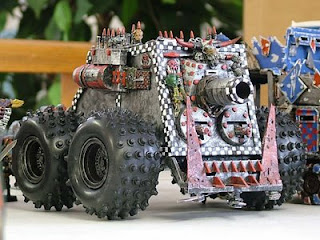 Game 3: Orks
I was very glad to see that my final opponent was a balanced ork list.Uumlok's trukk Krashaz. He had a few large blocks of boys, and burnaz in the battlewagon (quite an impressive scratchbuild.) With a warboss with nobs in an old armorcast trukk, and more boys in another nice scratchbuild trukk. Uumlok told me he'd been playing orks since just before 3rd ed. I loved seeing the old models, rather than more BlackReach (I like the BR models, they're really common though.) The IST's earned their keep exploding the Battlewagon, and falling to a boys charge, which let the SoB's and shelia kill off the burnas and boys. Uumlok made what he thought was a tactical error taking his 2 trukks around the side blocked by a large solid building, to charge the Inquisitor. It turned out to be fine, as both of those were troops I wasn't going to be able to kill, because I couldn't shoot their trukks until they were next to me. (the exorcists were busy with the Deff Dread, and Killa Kans.
Draw


Summary:
overall, I came in 11th. I think I brought the right list for this time. I might take some inducted Guard Vets next time. I did pretty good with Army comp anyway. It's good to know more what the army comp rules are, and what the paint standards are. I need to put gravel on my bases, so they look better, and get a few more points. I did get compliments on the black and cream color scheme. I had been tempted to strip it all and quick paint all of my sisters light cream with a brown wash. I might actually push ahead with my original colors, and keep the black and scarlet for the transports. It's interesting how compliments, and my desire to have an impressive looking army can possibly override my want for a quick paint job.

I'm still thinking of priming my GK's in reddish brown, and paint them cream, with perhaps a pearlescent overcoat.
posted by Farmpunk at 12:53 PM