bring in the little men

Last Wednesday night I tried out WH using Inducted guard for the first time with the new IG codex. I played protem with his infantry marine army.

I played the list linked here:
WitchHunters with inducted platoons and Russ

not too bad for me.
we rolled annihilate and dawn of war. fair for me, and not bad for me. I actually liked the idea of him walking most of his stuff over, and having a chance to beat up on the forward deployed combat squads.

I combined my platoons into 2 20-man units with autocannons. I figured combined fire would win my day, and save me a few killpoints. Protem combat squadded all of his marines, to split up their abilities.

He won deployment, and put out 4 tac combat squads. I wasn't thinking, but he should have only deployed 2. Which would have actually made a difference. They deployed as far forward as possible, and the Lascannon went in a building.

I put the inquisitor Lord squad on and around a building, surrounded by a 20-man squad, hunkering for cover, and put the other 20-man squad in another nearby building for cover. 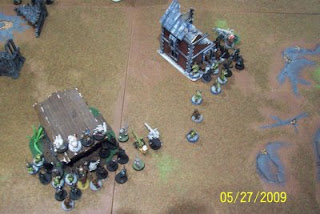 Turn1:
all of his stuff walked onto the board, and ran. So did the squads up front. the lascannon tried to shoot, but missed.

My force rolled onto the board, and couldn't see a lot because of nightfight. The two SoB squads moved 12" in their rhinos and disembarked, then shot up the center Marines with a flamer and powerfist. the IG unloaded into the Libby squad in the center, to the right of the center squad. I knew some charges would probably come from the other two combat squads, but figured the Cannoness could mop them up in the next few turns. She'd have a fun time with the melta powerfist squad with the libby in it.

Turn2:
So he charged with his multimelta squad into my left SoB squad (which would be a nice tarpit for 5 marines), and then into the right squad with the Libby squad. The multimelta squad and SoB's pushed combat for the rest of the game. The Libby tied into the right SoB squad, and got tied up himself. The lascannon fired, and wrecked the right SoB squad rhino. The thunderfires shot into the IG, and did some wounds, and one to the Inq. squad. Everyone was cool with the Cannoness propping up their Ld. The Sternguard missile shot, but failed to wound, and the Sternguard combat squad with 2 termie squads ran forward.

The Russ decided the thunderfires shot enough, and scattered enough to land hits on both cannons, destroying them. The exorcists unloaded into the lascannon squad, taking them down with some help from the Inq. Lord, and the IG. The left SoB rhino moved around to give cover to the cannoness.
The cannoness leapt forward, eager to lay waste to the Librarian, only to fail a faith roll. She ate Librarian force weapon, and died quickly. The power fist killed off a few more Sisters, but they hung around.

Turn3:
The termies, sternguard combat squad all moved forward, as did the dread. the Sternguard stop the rhino in the middle, immobilizing it. The Techmarines run forward, the Melta dread takes a shot at the russ, but is out of melta range, and does nothing. The Librarian and powerfist finish up the right SoB squad.
One exorcist kills off a techmarine, the other finishes the Libby and powerfist in cover. The Russ blows away 4 of 5 sternguard advancing on the right. the IG right squad moves forward out of cover, and lays fire into the lightning claw termies using 'first rank fire, second rank fire', along with krak grenades from the two Plat Com's. the left SoB squad and multimelta marines slog longer.

Turn4:
The lone sternguard hides in the building where my 20 men had been. The termies catch the large squad of men, and do stupid amounts of wounds, but leave 3 men. One of them actually killed a Lightning claw termie, and earned a silver star. having lost the combat by 17, I expected to run. then rolled snake eyes. just exactly what I DIDn't need. Apparently guardsman Bobbo was to hopped up on killing a termie to even THINK about running. I had REALLY wanted to lay a plasma cannon down on their heads too.
I used one exorcist to kill the dread, the other to kill a techmarine. one techie was in cover still. The inquisitor lord squad whiffed at the sternguard, as did the other large platoon. the two Plat Com's moved up, and shot the last sternguard, preparing to die by termie.
The sisters and multimelta pushed again.

Turn5:
the termies continue their rampage, making an end run through terrain to get a possible charge on the other platoon, which they do. taking out the 2 pla com's and the platoon. The techmarine runs closer to the exorcists. the multimelta is still fighting....

I think the Russ shot at the sternguard in the back, as did one exorcist, leaving 1 lonely sternguard bolter. the inquisitor lord didn't do much vs. the termies. They would get eaten on turn6.


turn 6 wound down, and I believe the sisters ended up still bogged with the multimelta. there were 4TH/SS termies, and 1Lightning Claw termie and 1 sternguard left. he'd taken down 1SoB, 2platoon 2PlCom, 1inq. 1inq ret.
I'd taken 3combat squads 2techmarines, 1sternguard, 1 dread.


I was so close to a win. only a few rolls the right way, and I'd have won. oh well. I had fun, and tried out the platoons. I think next time I'll try to get 2 lascannons instead of autocannon. I think autocannon served me well enough in this game though.
posted by Farmpunk at 9:54 AM