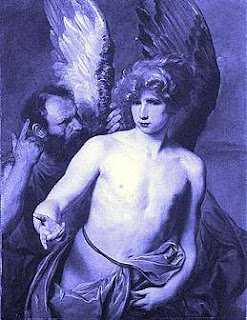 Daedalus Nix came to Indianapolis for some job training, and sent SandWyrm and I an e-mail asking for a game. SandWyrm had the flu, and I was more than willing to give Daedalus a game.

Daedalus plays Tau, and this was his 2nd 'official' game. I let him choose what list of mine he would play down at the good 'ol FLGS.


Daedalus chose to play against:
1500pt WH w/Inquisitor and Callidus


We rolled for missions, it was Sieze ground with 4 objectives, and Dawn of War Deployment. Hmm. not the best mission or deployment for this force. But it would be good for learning.

I think Daedalus won the roll for turn, and let me go first. Going second for nightfight, and going second to contest objectives on the last turn might help. So, I deployed, trying to get LoS to as much of the board as possible to prevent any possible Stealthsuits from hiding 12" from me. 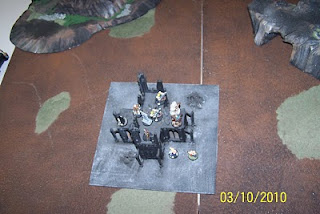 The Inquisitor Dakka squad went in the building on one objective. 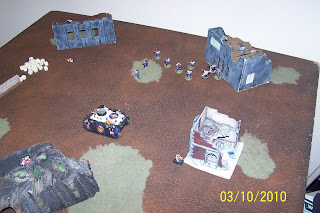 A Rhino and a Sisters Squad went on the other side of deployment, to prevent infiltrators. 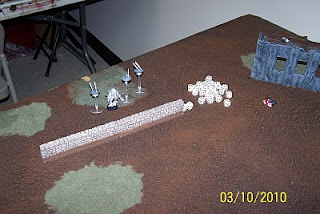 Shadowsun lines up on the other side of the board, protected by not only Nightfight, but her own stealthfield. 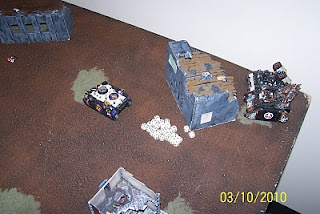 First turn sees the Rhino move to pick up the Sisters, and the twin Exorcists move onto the board behind the 'safety' of a building. 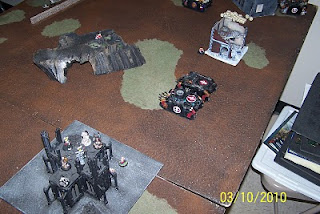 My other two rhinos rush onto the board midfield.
I don't really get to shoot much. Night Fight and Stealthfields are a dastardly combo, and keep Shadowsun safe.
In Daedalus' turn, he moved a hammerhead and a Broadside onto the board. The Broadside moved onto the giant mountain in my far left corner. He was hoping to sit in the heavy cover, and hammer away at whatever he wanted. The Hammerhead didn't do anything but move onto the far right corner, and hide behind a building.
Turn 2:
saw the start of the new day. 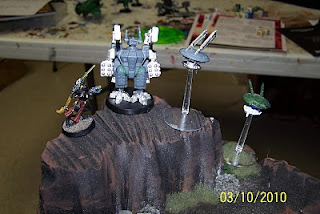 Shelia decided Jersey Shore was rubbish, and thought dancing with a Broadside sounded like more fun. Better to fry someone Else's brain with the mind flayer rather than fry herself with crap Telly. 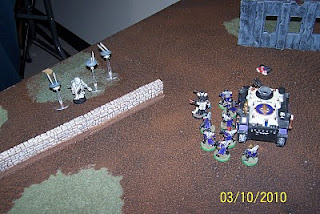 The Sisters that were midfield advanced and unloaded a bunch of shots into Shadowsun. "oh, we can SEE you now" You can see the wounded Guardsman in front of the Rhino (he's the objective)
My two Rhinos midfield raced ahead a full 12", and popped smokes. The sisters swung wide, around the giant rock outcropping, and the IST's swung right side, closer to the Blue Sisters. 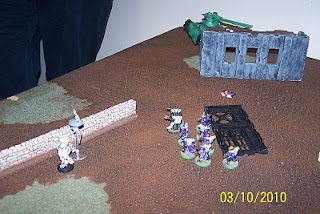 Shadowsun made sure it was an ex-rhino. The hammerhead traded was shaken by the exorcists, and hid. 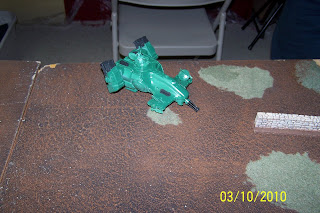 Daedalus' reserves only yielded one squad in it's devilfish. It shot at the Blue Sisters.
Turn 3: 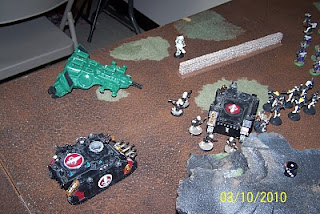 I rushed my other two rhinos forward, unloading the IST's, and moving the Cannoness and Seraphim close behind. 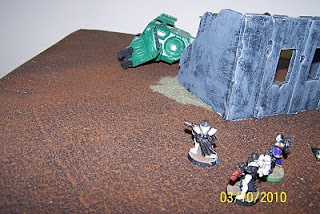 The Blue Squad moved over to get a Melta shot on the Hammerhead. She shoots, she scores! and cleans up what the exorcists didn't. 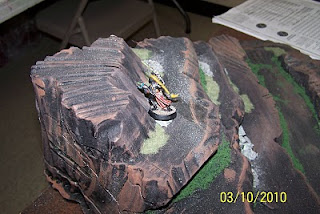 Shelia finished her dance with the Broadside, and begins her long trek home, or "oh geez, I don't want to get eaten by Kroot coming in from reserve"
I brought down the Devilfish with the IST's, and the Inq. Lord made sure to hit the Firewarriors with enough fire to make them run. 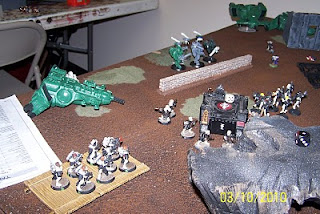 On Daedalus' half of turn 3, The giant squad of suits came on, as did the other Devilfish.
You can also see Shadowsun exploded the Sister's rhino out from underneath them, and he shot up the blue sisters squad pretty good, but they stuck.
Turn 4: 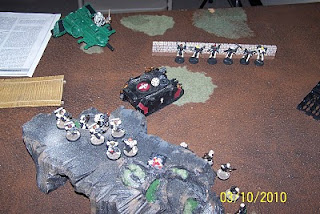 The Seraphim jumped forward, and charged the Crisis suits, laying them low, while the Cannoness dealt with Shadowsun. The Sisters and IST's hoof it backwards to claim objectives.
The Blue Meltagunner and Sister Superior popped the Devilfish that had shot their squad up. The Seraphim regrouped to behind the wall, waiting for Kroot.

Daedalus' Kroot show up, and shoot at the Seraphim, taking down a few. I think the Stealth suits come on and poured good shots into the Seraphim, but go go gadget faith Invul. save.
Turn 5: The Seraphim shoot and charge the Kroot, tying them up. 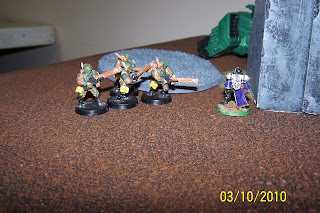 The firewarriors kill the meltagunner, but don't take down the superior.
Summary:
Daedalus moved a piranha  onto the objective with the IST's, to contest it.
I had 1 objectives to 1 contested objective. I had a good time, I think Daedalus Nix did too. It was kind of fun to pull out an old list, and play it again. I hope it was a good learning experience for Daedalus.
Without bonuses for reserves rolls, I'm not sold on putting much in reserves. I prefer to have all of my force available, and maneuver to where I need my units. I would have had a tougher game if everything but the Kroot came in first turn.
Being on table at beginning of 2nd turn would have let him fire into me. Tau, being shooty, needed to unload on me before I got close and shot him.