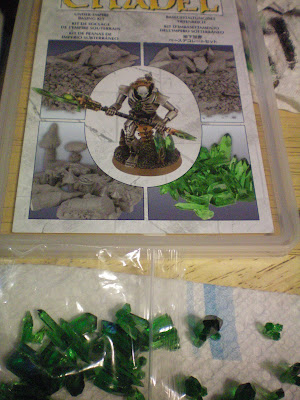 I had purchased the new under-empire basing kit not too long ago, as I was looking for some good cavernous growth to use on bases. This is one of the new kits GW came out with, and they are priced $5 more than the normal basing kits. I figured I would go through what you get so those interested could see.


I'll start off by saying with most of these kits from what I've seen, it is probably a good idea to split it with a friend. In this case, I had little use for the necron crystals, and extra rocks. I knew I wouldn't use everything in here, at least not any time soon, so wasn't fully expecting my money's worth from the get go. 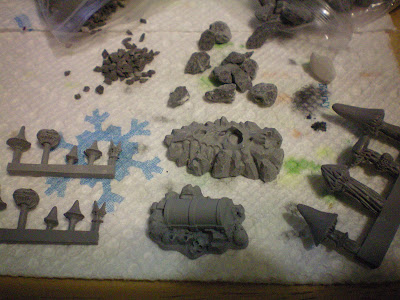 As you can see in the picture above, you get a decent variety of mushrooms, and two large pieces. One is a dragon/dino skull in rocks, while the other one is a treasure chest. I've also poured out some of the pebbles so they can be seen. You get a bag of pretty large sized rocks (about space marine helmet sized) and some smaller rocks. The larger ones are good for adding a little extra weight and as something to give depth to a base. The smaller ones I will mix in with my sand to give a more uneven basing. 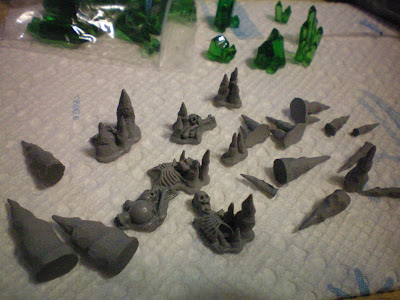 Here we have some rocky spires (stalagmites/stalactites) . There is a good variety here as well. A few skeletons and skulls mixed in along with a vase of some kind. In the top you can see some crystals I pulled out. I'm really impressed by the quality and variety of the crystals, I'm trying to find a way to incorporate them now.

Overall I'm happy with what I got out of it, though a little sad half of the container was filled with rocks. After looking at the rest of the kits, the snow base kit (northern waste) is probably the best value, giving you snow flock, ice crystals, rocks, and grass.

To finish it off, I had ordered some alien fungi. These are very large, and will make an interesting terrain piece. The space wolf is to give scale to these forest of fungi. Now those are some nice shrooms. 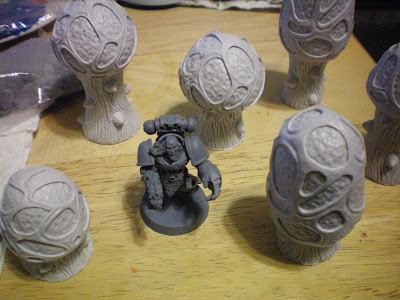 posted by TheGraveMind at 5:42 PM