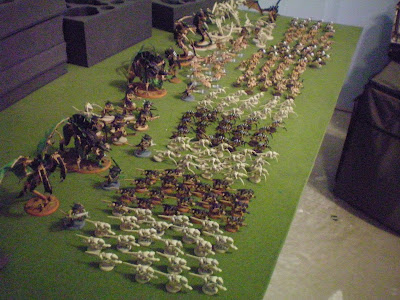 A few weekends ago there was a couple of Apoc games that went on. I managed to make it to one of these, bringing 4k worth of Nids with me. It was somewhere around 40 termagaunts, 60 hormagaunts, 75 genestealers, 20 warriors and 4 trygons. This is mostly what I have painted, and wanted to bring.

The teams ended up being 4 chaos players, vs 2 nids, and eldar, and a space marine player. Limited to 1 super heavy per 4k a side, we gave all of our slots to the eldar player who had some very nice toys. Both of us nid players went nearly full reserve between flanked march, outflanking, and deep striking. We set up a 5 point objective on either side, 4 three point objectives scattered around, and each building claimed was a bonus point. 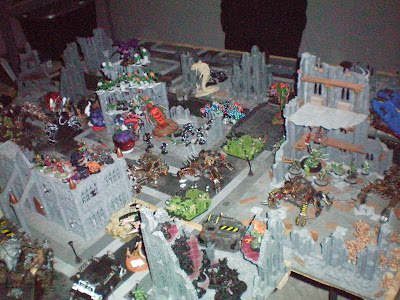 Chaos set up, with some where around 8-12 defilers, a plague tower, tower of skulls and plenty of marines in rhinos. It was three nurgle players, and one slaanesh player. Epidemius with 20 plague bearer and kugath allied in. 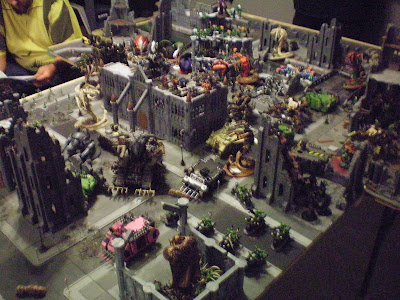 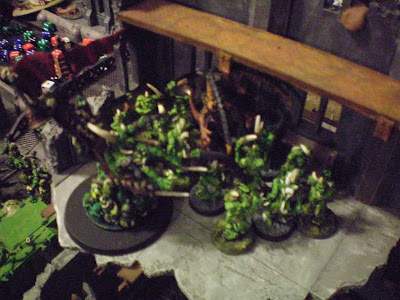 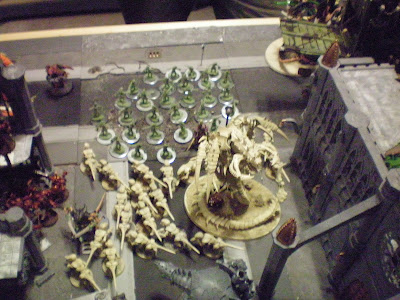 Nids started arriving, filling in every open spot within the city. Pods of zoanthropes rained down and 4 defilers on one flank fell to their warp lances. Ymgarls and genestealer formations burst out of terrain and assaulted into ill prepared terminators. One broodlord managed to survive a round of dueling with Abbadon himself. 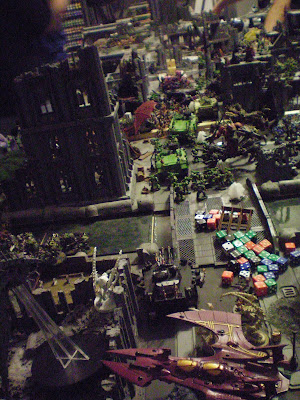 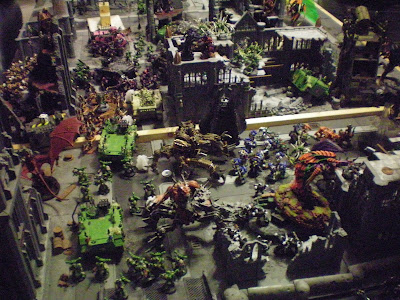 The fighting was fierce, as the Tyranids took the brunt of the return fire, but alas the battle was already lost. The deceit came not from any disciple of Tzeetch, but of nurgle's foul rot. Swarms of zombies burst from the sewers and corrupted our back 5-point objective, robbing us just shy of a chance of victory. 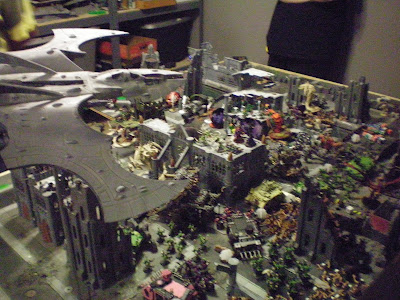 Eldar continued to provide air superiority while the brave and steadfast marines charged the middle with rage, taking all objectives along the way.

In the end, though the ruinous powers had prevailed in this battle, they were not pleased. For Abbadon's incompetence at killing a simple broodlord on the first round of combat, and losing his entire retinue to genestealers, he was reward with spawn hood. 5 winged hive tyrants descended upon epidemius, and with mass enfeeble and Devourers, banished the demon and his kin back to the warp.

Lord of Macragge bested the Plague hive Typhus in single combat, while losing the rest of his retinue to nugle terminators. Demon princes were dragged down as swarms continued to flood out from the Trygon tunnels. Surviving zoanthropes focused all of their fire into the plague tower with aid from eldar and space marine fire, detonating the foul device, engulfing entire units in its eruption.

Overall a very fun game, though time was cut short before the full might of my swarm could do their work. I think I claimed the least objectives and killed the least, though my trygons and swarms pulled an impressive amount of fire power. Not being able to assault from reserves hit nids hard in apoc, so I'll have to change up my strategy for next time.
posted by TheGraveMind at 2:34 PM