So I Went To See The Hobbit And... 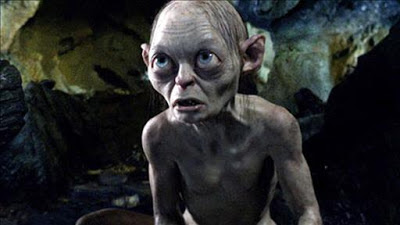 Having a rare evening to myself, and not having anything better to do, I decided to go see the new Hobbit movie last Friday. Here's what I thought of it.

Beware of spoilers. You have been warned.

As a long-time dwarf player, I was very satisfied with the love they got in this film. From the fine performances and characterizations of the party, to their general stick-togetherness whenever something threatened them. They're just plain likeable in a irreverent, yet sympathetic way.

I also very much liked the whole opening that focused on Erebor before, and during, the attack by Smaug (Who you only see indistinct glimpses of in this film). It made the Elves look VERY pansy and useless in comparison.

Martin Freeman was perfect as Bilbo. Benedict Cumberbach (the other half of the BBC 'Sherlock' duo) is supposed to be Smaug, but there was no dragon dialog in this first film, so I was a bit disappointed. :(

Good performance, as always, from Serkis, and thanks to new tech, Gollum's looking better than ever. Especially compared to Jackson's first attempt in Fellowship.

4) The Length Was Fine

I had thought that I'd be bored silly by the length of this movie. But apart from the Radagast scenes, it moved along just fine. No problems there.

At first I thought that maybe my theater didn't have the new 48 FPS tech that's been causing so much hubbub on the net. But then I came home, watched my Fellowship DVD, and realized just how clear the Hobbit's visuals were in comparison. Not just in resolution (duh), but in terms of how blurry things looked when they moved compared to when they were standing still.

So thumbs up. Though, if anything, I want an even higher framerate. Since I did notice a bit of  stuttering in some of the action scenes when stuff moved too fast. Normally, at 24 FPS, I don't because of the extra blurring.


The Not As Good

Holy crap he was bad. Not quite a Jar-Jar Binks, but pretty damn bad. Why was he in this movie at all? If he had to be there for the expanded plot points, then why make him so goofy? Why make it look like he spooged all over his own face and didn't wipe it off? Why make him ride a stupid ill-conceived rabbit sleigh, and then screw up the special effects for it? And what was with the whole hedgehog scene? Was that the only way Jackson could think of to show how Mirkwood was starting to turn evil? Aweful!

2) The Conspicuous Lack Of Blood

This is a PG13 movie. So was the first LoTR trilogy. So why did LoTR have some blood in the fights, but not The Hobbit? It's not like all PG-13 movies have blood in them, but I didn't sit through the Avengers constantly noticing how it didn't have blood. I only noticed it after multiple viewings. They simply designed the action in such a way that you didn't notice it wasn't there.

In the Hobbit though, this lack of blood was actually distracting. I mean, Jackson is still lopping off heads, stabbing people, and in one case slashing a giant goblin right across the belly with an extended, lingering shot. Yet all you see is a pink line on said belly. It's irksome. Then he's slashed across the neck, and decapitated. But still no blood.

I mean, I'm not expecting Sparticus-level gore here. But either put a little in, or don't design the action in such a way that it's an issue.

3) They Didn't Finish The Riddles!

There were 2-3 riddles in the scene with Bilbo and Gollum where they only got through half of the lines. It's not like the riddles were edited for only the best parts. No, they simply stopped half-way through them. This is especially lame with the 'Time' riddle. Gollum doesn't finish enough of it for someone to actually guess the answer. Plus, without the "Slays Kings, Ruins Towns, and Beats High Mountains Down!", where's the dramatic punch? Dumb. They saved what? 1-2 minutes of screen time by doing this? They should have cut out Radigast's hedgehog scene instead.

Ok, so the Hobbit was originally a kid's book, and LoTR was more adult-oriented. I get that. I remember trying to read LoTR as a kid after reading the Hobbit and not understanding it until I was older. Check. Understood.

But this movie can't decide whether it's a kid's movie, with trolls arguing about how to season Dwarves, or a serious LoTR prequel, with pieces of the Silmarillion and the LoTR appendices mixed into it. It has vicious hand-to-hand fighting, but no blood. It has serious scenes between Gandalf and the White Council about the Necromancer (really Sauron), but then it has Radigast bumbling around with hedgehogs, rabbit sleighs, and 'fighting' off a wraith like a retarded Mr. Bean. It's disjointed and uneven.

Tolkien fans will enjoy it. But it's no LoTR. Still, I (mostly) liked it, and will probably purchase it when it comes out on Blue-Ray.