Tippcon GT Warmaster-How I learned to get better in 6th 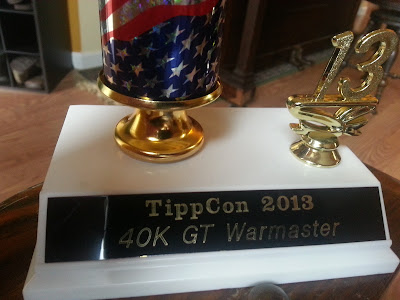 Spaguatyrine here with a rundown of 2013 Tippcon Grand Tournament.  I came out on top against some great competition but learned quite a bit about 6th edition and how to improve my generalship skills.

Last year I won 2012 Tippcon in a nail biter against Nemesis/Dustin Sanders who was playing his dark eldar.  Last year it came down to the incredibly resilient 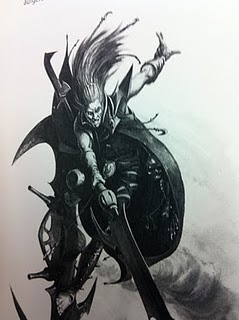 Yes all I had to do was kill the baron in 2 turns of shooting to win the game. It took my entire army of psybolt dreads, razorbacks, psycannons, etc. He finally went down on turn 6 with a Strength 6 psybolt razorback shot. (I only had 1 more unit to shoot at him and I would have lost)
This year I decided to take my Necrons and ally in a new army I have never played. I had played against Orks many times but never actually used them as allies. 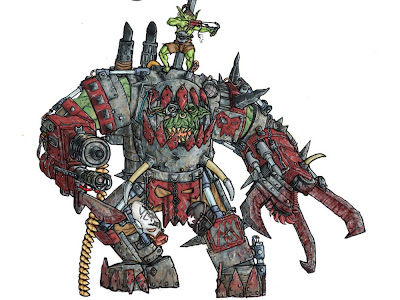 I also dropped my ghost arc and Necron lord with Krypteks....

Instead I took two destroyer lords to go with my wraiths.  After adepticon and with the coming changes to tau and eldar I decided I needed my wraiths to be able to handle more firepower.  Two destroyer lords allows me to have 2+ saves for each wraith unit enabling them to last much longer against lots of shooting.  The list performed well with giving me a large fearless blob of orks that are toughness 4 with shootas.  I only tested the list twice but it did very well against tough competition. I can say that I will be taking the orks and necrons to the Feast of Blades qualification tournament in July and most likely to The Nova Invitational and Grand Tournaments.
So to what I have learned that will help me better in 6th edition:
#1. Vehicles are coming back! And even though they haven't hit everywhere yet.  I absolutely see the value in them.  In my 1st, 4th,6th, and 7th game having transport vehicles stopped my wraiths and barges from killing what was inside.  In games 2, 3, and 5 I was able to easily demolish foot units that had no way to hide from barges, scythes and wraiths.  In addition don't be afraid to bring vehicles. With night fight and cover being a 5+ you can easily get cover saves and once first blood is lost it doesn't really matter anyways.  I used a battle wagon and it was amazing!  It got destroyed only 3 of 7 games. Of course 4 hullpoints and front armor 14 helps but there were more threats for the opponents to shoot at.
#2.  I knew this but no where like these 7 games did I see this on both sides.  Weight of fire wins games in the shooting phase. In game 2 I had to walk across the long table edge at 50 grey hunters behind an aegis line. I can tell you even with me deep striking a unit of 5 wraiths on turn 2 I lost all of them to shooting before they got into combat. I also lost some nobs to shooting and took wounds on my other wraith unit. I have a fast army. A really fast army but taking tons of shots kills "anything".
On the same end I was able to just destroy some foot lists as I slowly backed up waiting for them to come to me.  So the more "rounds down range" the better.  Which is the way of 6th edition. The more shooting the better.  But if you can survive shooting and get to the gunline you can win.  (See point #1)
#3.  The Great Unclean one is a bad muther fu.....  Yes he is one that just won't die. I put a ton of stuff into this guy and well, nothing. But fortunately I had wraiths to that kept on passing their 3++.  I still won against this army but it was incredibly difficult to deal with big fatty.  Fortunately he is slow and you can play around him.  I thought I was going to butcher him and I was well....wrong....!
#4.  Prioritize the game. In other words sometimes you need to play the mission first, the army second, the terrain third.  By looking at your opponent and the mission and the terrain pick which one will give you the best chance to win.  Example. If you are playing against necrons, they don't really need terrain so using terrain to better your chance to win might be your first priority. If you are paladin army and there is multiple objectives, 4 or 5, then play the mission first since paladin armies cannot normally hold that many.  So in this instance you might not even engage the opponent very much but use your better mobility since paladins are also slow.  If you are dark eldar and playing against Nids, just kill the army first and worry about the rest later.  6th edition is more about the general than the army list.  Use strategy and prioritization to give yourself a better chance.
#5.  Player placed terrain is really fun and adds "forging a narrative".  But I really enjoy placing terrain.  But I do feel that this helps better players more than making it even. In other words, top level players can take more advantage of putting terrain where they want even alternating as it is another arrow in the quiver.  We will still most likely have preset terrain next year for the Indy Open to take that step off the players plates.  There are a lot of "things" to do at the beginning of the game.
#6.  Use closest models first in shooting to your advantage.  So if you want to kill a librarian who is in a squad of long fangs.  shoot from angles that the librarian has to take more saves including look out sirs.  (See #2) Concentrating fire on a specific unit to take out key parts of an IC or special weapon is vital to your success.  Also if going first and you a slim chance for first blood put all your firepower into whatever you are shooting at to get first blood.  Tied games will often be decided by first blood (where applicable-not Nova).
#7.  Assault is still viable. I have an assault based army and I can tell you I can get to almost any army. So tau are scary but you can get there. AND when you do you can crush them!
So how did Tippcon 2013 end?
Dustin Sanders and I in a battle to the end. He played CSM/Chaos with a Psyker Level 3 Great Unclean One.  The game was close.  I got a lucky arc shot from a barge where he took 2 hullpoints off his predator which was huge in the game. I also got somewhat lucky by taking down his helldrake in 1 turn with 2 barges.  Great shout out to Dustin for making a second year final showdown at Tippcon.
What are you learning about 6th edition that you can share with us to make us better players??
posted by Spaguatyrine at 9:27 PM