The First Transport is Away!


Half the fun of writing an article on X-Wing is picking the best Star Wars quote for a title.

Fantasy Flight likes to do this cool thing where they let you know the rules for stuff before you buy it.  So if you want to check out the rules for the huge ships and epic level tournaments go here.  If you want to know the highlights and what these rules may mean for the game keep reading...

First off, even if you are not interested in playing the epic level games, the Transport comes with some pretty boss X-wing pilots and astromechs.  The big ships can also be used as obstructions in a standard game in place of 3 of the normal asteroids.  Any rebel player is going to want to pick one up regardless.

The big ships work in some pretty interesting ways.  They have a unique movement system to represent their slow speed.  They have a single template that you move the model's base along the side of instead of front to back like the existing ships.  For turns, you utilize a notch in one end--placing the inside edge of the huge ship's front edge in it.  Then you place the side of the base up against the bank portions of the template that protrude out from the strait edge. 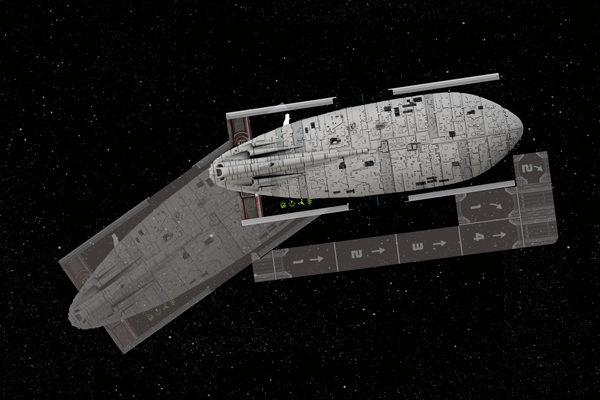 This gives a bit of a fishtail effect to their turning.  You also don't wan't to be in the way of a big ship.  Standard blocking tactics don't work against them as they destroy any small and large ships they overlap(they take a damage roll like a small ship hitting an asteroid when they do this).  They even obliterate obstacles when they hit them too("Asteroids do not concern me, Admiral").  Luckily if a small ship hits them it's treated like a hybrid of a ship bump and an asteroid collision.  You stop at the nearest point along your movement template where the base can fit, and then take a single attack die roll against yourself.

Big ships can not be denied their action.  They also can't get extra actions or use focus and evade tokens or be effected by stress.  They instead get a special energy phase.  Each maneuver on their dials generates energy for the ship inversely proportional to the distance traveled. i.e. if you move slower, you generate more energy.  The energy is used to power their upgrades, fire additional weapons, jam enemy ships(give them stress), and can be used to regenerate shields.  Ion tokens still effect the big ships by reducing the energy they generate on the next turn.

From the spoiled abilities so far, it looks like these ships can be very versatile in offensive and support rolls.  Despite that, the ships don't look unstoppable.  They have no passive defense dice, and have to use a special defense action to get one.  So even a gaggle of Academy TIEs will nickel and dime these guys down pretty quickly.  You'll need to get past the Range 5 on that corvette's main gun, but still.

Accompanying these new ships are the rules for epic level tournaments.  Epic tournaments look pretty hardcore.   300 points and 3 hour rounds played on 3' x 6' tables.  There are a few restrictions on what you can field.  You can't run more than 12 of a single hull type of small ship, and 6 of any large.  So no 24 TIE swarms thankyouverymuch.   They also added a separate epic level points allotment.  Epic ships cost a certain level of epic points in addition to their listed normal point allotment(3 for corvettes and 2 for transports).  The epic format limits your squadron to only 5 epic points.   No 10 transport wall of death for you either, stop being such a WAAC jerk.

It's going to be interesting.  X-Wing has thrived on the 100 point game.  Everything is balanced to where that point limit forces the right kind of hard choices on squadron creation.   The base cost of the ships proportional to the standard size game keeps the game fairly balanced despite whatever new abilities they add to the game.  As awesome as you kit out your 3 X-Wing, you still only have 3 X-wings.  Try as you like, you just can't get a 5th B-Wing or a 9th TIE in a standard game.  Epic is going to open a lot of options in list creation, and add more possibilities when it comes to table-top tactics.  I'm excited to try things out when I get my Transport.

They also included a epic team tournament format as well.  Each player gets 200 points and 3 epic points.  That's got me the most excited.  It's a format I'd rally like to try out if I had a spare 3548 hours of game time to burn.

My only gripe is for the poor Imperial players(though honestly who doesn't play both sides in this game?).  The lack of their own big ships is going to make their attempts and epic level play interesting.  I played around with putting together a 300 point Imperial list and everything I came up with used all but 3-4 ships in my collection.  The Wave 4 ships should help the Imps out in this regards.  The Phantom and Defender are probably going to be cost prohibitive at the 100 point level.  Epic level is going to be the only time you see these ships legitimately run in multiples.  Otherwise I'd suggest picking up an extra Lambda shuttle or two.  They'll be the closest thing in an Imperial list to match the support roll that the big ships provide for the rebels.

FF really needs to put the next big Imperial thing on the radar to keep the masses happy and content.  Unfortunately, we are in the run-up to Gencon right now, and I don't expect any big announcements until then.  (FF, give us a Star Wars ground combat game too pleasepleasepleaseprettyplease)