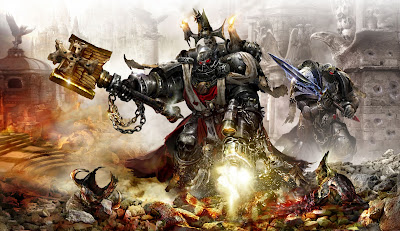 ﻿
After reading the 40k novel Helsreach, which was incredibly awesome and my favorite in the new 40k series, and playing against black templar armies in the last few tournaments I decided to buy the codex. I found a codex for $17 at an old comic shop in Evansville.  As I am looking and studying the codex a lot of interesting options are jumping out at me....

It is true I am in love with marines and close combat, but have been working on my dark eldar to bring them to a level I am comfortable with as far as competitive play. I have again had to put them on hold as a friend is using them to get ready for the Indy open.  But being played very tough by 2 Black templar players against my Space Wolves has opened my eyes to the possibilities.  Since I want to be in close combat a majority of my games can I build a force of templars to match the tenacity of my space wolves.....?

Preferred enemy and fearless.  These 2 items army wide for only 50 points is an amazing attribute to the Black Templars.  If you combine these with lightning claws things can get nasty.  With the errata that now the wargear is the same as other codecci than assault termies with preferred enemy are amazing.  Plus they can have furious charge which make them able to stand up to TWC.

The HQ choices are cheaper and pretty amazing when you look at the emperors champion with the preferred enemy vow at only 145 points and a good chaplain with 3 wounds at 110 points.  Grimaldus is expensive at 195 points but he can join any squad with his retinue and even when dead gets back up on a leadership check with 1 wound left.  That is where they got that from!!!!  Helbrecht is not worth his points in my opinion.

I see the troop choices as a liability at this time when I first scan them as their modes of transport are so much more expensive than newer armies. The leadership 8 is kind of annoying but if you can get in combat you will be fine since they are fearless in combat.  One great option is to use neophytes as cheaper alternatives to the 16 point per marine you pay 10.  They will die faster, but they can take the melta gun shots anyways.

The heavy slot is the big downer for me.  The only thing they really have are landraiders, predators, and vindicators.  I like landraiders for big games, but 1 melta drop pod and you loose so many points it is hard to take them.  The vindicator is nice as you can add power of the machine spirit meaning you can move 12" and still fire the cannon, but I don't think a 150 point vindicator is worth if for me.  The predator is probably the best long range heavy this army has but they are also more expensive than the standard predators. the version I like is the autocannon, lascannon sponsons but this version is 125 points.

The elite spot as is filled with some great choices such as the venerable dread as discussed above, and terminator assault and shooty squads, sword brethren (which are veterans that are not worth it), and Techmarines. Now they actually have a good techmarine which has 2 wounds for 70 points. He has a servo arm, bolt pistol, auspex, and power weapon.  This is much better than the equivalent in other armies.  for 35 points he can have a full servo harness.  With the elite slots being full I am not sure I would ever see one played but he is an option.

The fast attack section has some good choices as well. The assault squads can have double plasma pistols of flamers, 1 power weapon or fist, and everyone can take a storm shield.  This makes them expensive but with having a preferred enemy makes them a force to worry about.  Their meltabombs also only cost 2 points per model.  The Bike squads are where I am looking.  You can have 3 meltaguns, flamers, plasma guns, or power weapons per squad. Talking about great options!  They can also add an attack bike which can make a total of 4 melta shots in a bike squad.  Pretty nasty. Or you can go all power weapons in the regular bikes.  You also have the option of actually taking an attack bike squad with up to 3 attack bikes.  I have never liked speeders but their speeders do cost less, but you can only have 1 typhoon per squadron.

﻿So with all this being said I am looking at a list with these options. What do you think?

Terminator squad-2 cyclones with tank hunter
Terminator  assault squad with 2 LC and 3 TH/SS
Ven Dred with Las/ML and tank hunter
3 x 6 Initiates and 3 acolytes with melta and powerfist in Rhino
2 x 5 initites and 1 acolyte with missle launcher
5 bikes with 3 meltaguns and attack bike with multimelta
Predator of some variant.

What are your thoughts?
posted by Spaguatyrine at 9:03 AM