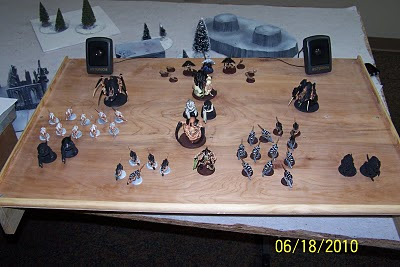 As many of you may have noticed, courteous of Farmpunk's post with pictures, there was a Indy40k Tournament recently that we attended. Above is my army, I know not very intimidating. Compared to the other armies there, my models looked atrocious. They were hardly painted and not to my standard. Something around 850 points of my 1500 were anti-mech, as I was assuming I was to face tons of full mech list. It seemed that many of them were tired from ard boyz. There was only one IG player and he seemed a bit new.

As it turned out all of that anti-mech came in handy in most of my games. Three of my four games were against half mech space marine lists. Now I had just gotten to the tourny right before it started, and lucky for me I got the "bye" so I got to face against the House Army. It was lucky because in my rush I had forgotten my army lists on the printer, and somehow had not packed one of my HQs. The game still went well enough for me, and I was able to destroy almost all of the tanks in the first two turns. 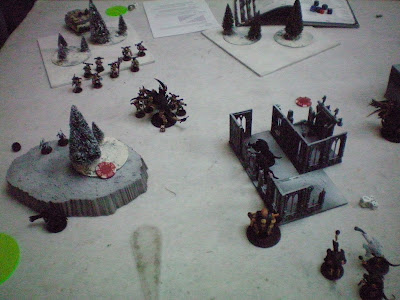 After making almost three full squads of chaos marines walk from their deployment zone and taking casualties, I assaulted upwards and managed to push up to the left objective. On the right side I managed to kill the deamon prince and raptors to assault the summoned deamons and claim the right objective as well. This led to a Victory in game 1 for me. It is worth mentioning that the way the missions were set up, the objectives were the primary goals, holding table quarters were secondary and then tertiary was something like having troops in the deployment zone. Each mission was generally set up that way, with objectives, table quarters, and deployment zone as primary, secondary and tertiary, switching it up for each mission. 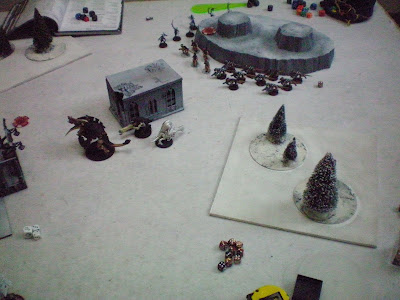 After game 1, there was a lunch break, which allowed me to run home, grab my army lists and my missing HQ model. I had plenty of time to grab some food and make it back. My second game was against an almost full mech Vanilla Marine list.
Special Chaplain Cassius
Some sternguard
atleast two Tacsquads with razor backs
two speeders melta/flamer
predator auto/las
predator TL las/HB

The Mission was again Diagonal deployment, with an objective at center of the board that could only be claimed by an infantry squad making contact and having it join like an independent character. This would cause a bit of a fuss for many players but the TOs handled it well and everything was settled easily enough. 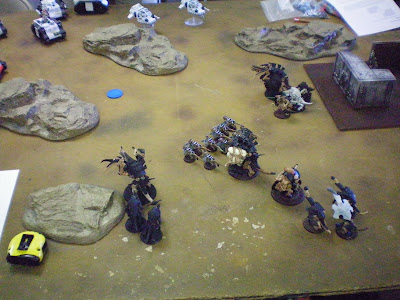 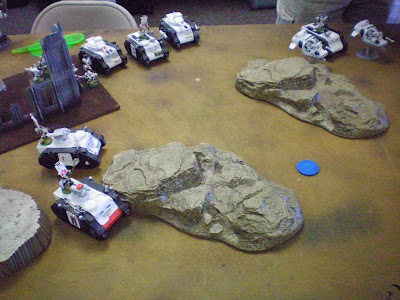 My deployment right on the line, smaller things hiding behind the bigger things with gaunts up front to claim the objective. He then deployed with the two predators looking down the firing lines, combat squaded heavy weapons in the building, sternguard with cassius to my left, speeders to my right, and tactical squads giving support in razorbacks. 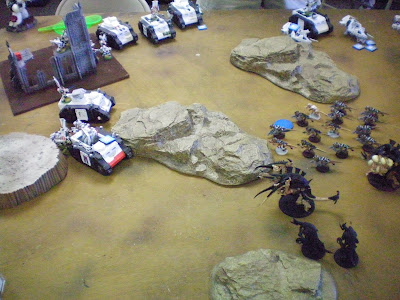 After my first turn I had both of his speeders in trouble and his sternguard and chaplain walking. He then in return pounded my gaunts down to just a few, and put a few wounds on my bigger guys. 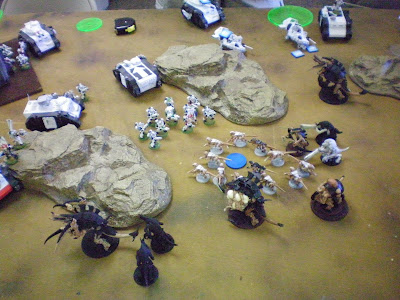 By turn three he had driven his tactical squads up and dumped them to try and clear me off of the objective, which I had managed to run a total of 3 inches from the center. The part where it is only under your control after the movement phase made it hard to move it anywhere, and to claim it, it must be 9 inches or more away from the enemy. Turn four saw the majority of his marines getting killed as my single moving mass of Tyranids crept upon the middle of the board. At the end of the game I took one of the units of hive guard to claim the objective and run away while the gaunts clogged the path with their bodies. My anti-mech served me well as I took out most of his vehicles early on and made it much easier for me. It was a second win for me. I fear I should have explained my army better though, as it seemed he had not played the new Nids as he was surprised as I explained what the tervigons do, which is a lot.

Game Three was against Blood angels, I looked forward to the fight as I had not yet gotten a proper fight against the Flying emoes yet. 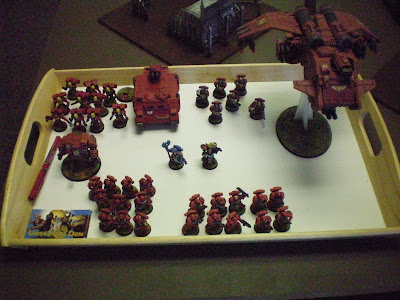 The mission was yet again diagonal deployment (looking back seems variance was needed) with primary goals being having more units in the enemies deployment, secondary being table quarters, and third being killing enemy's HQ. This favored the BA with all of their jump packs and speed.
I deployed as far up as possible, and he put his Lib and squad in the Storm raven, along with the dread. He then held it all in reserves so he could deep strike it in later. It was a shame cause it was an amazing looking model and deserved more board time. His chaplain and assault squad would also deepstrike in, so he had two five man squads and a razorback that started in his deployment zone. 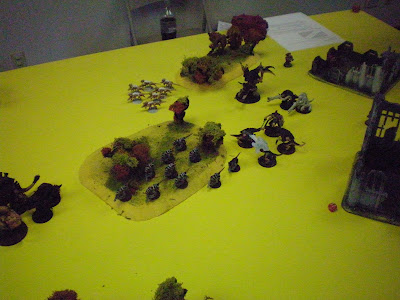 For about two or three turns my entire army pretty much walked across the board and killed what he had. By that I mean immobilized the razorback first turn, and killed the Five man squads down to one man each. I couldn't seem to kill the last guy, and they didn't run as I would hope. As his units arrived from reserves, He pumped some heavy fire which cost me a great deal of synapse and cohesion. I assaulted his Lib with my alpha warrior, trading tic for tac, killing the Lib and dying to the attacks of the squad that came next. I shot down the dread and the Raven after a turn and managed to mangle up his assault squads. 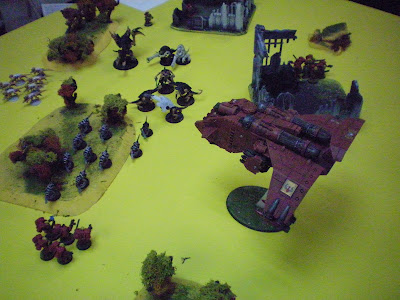 What it came down to was pretty much one guy from each of his squads still alive in my deployment zone, and half of my army running wild out of synapse. Some ran into cover that was outside of the zone, the others ran raging after the one or two guys, and not shooting them to death like they should have. Cough Tyrannofex. So it ended with a draw of units in deployment zones, a draw in table quarters and we traded HQs, so a Complete draw for the two of us.

After two Wins and a Draw I was placed at second place against Carlos's nids who had won every game. The climactic clash of these two hive fleets is going to have to wait till the next post.
posted by TheGraveMind at 1:14 AM