Another bag of bricks 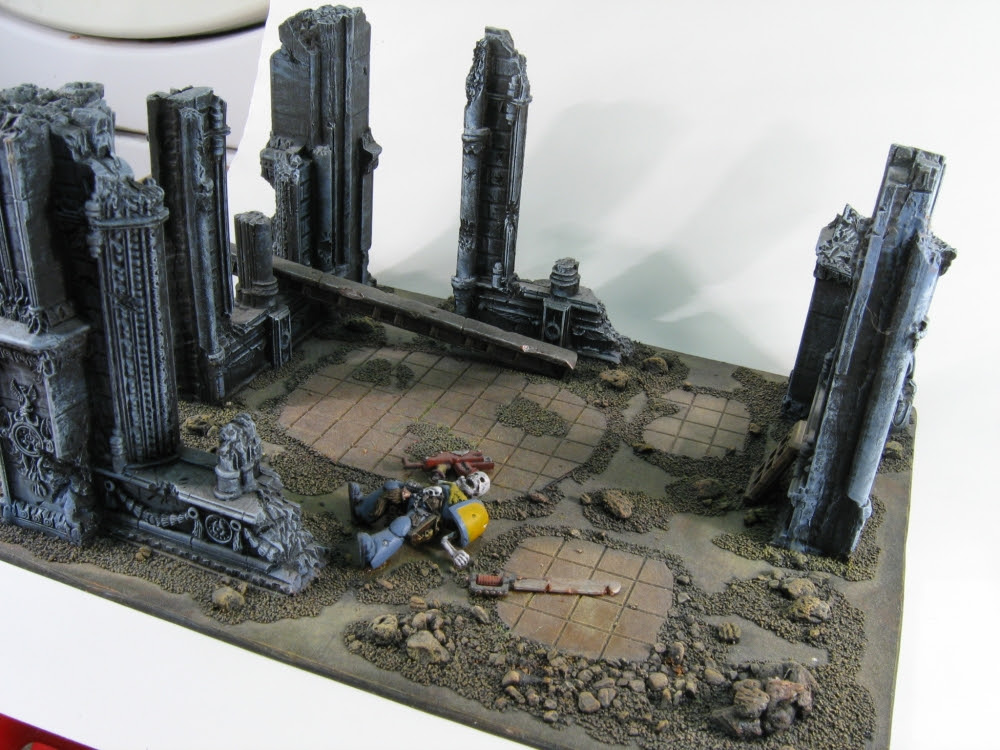 No, this isn't a Flogging Molly reference (as cool as that would be), but rather a quick look into an aspect of the hobby that, for various reasons, is often left out...

No, I don't mean how much you use on the table, correct placement, variety of sizes and types... I mean, more simply, having it.

There are a number of reasons why terrain building projects often come later (if at all) into a gamer's hobby.  Maybe you don't have a table at home (beyond an oblong dining room thing that's always awkward to try to measure deployment zones off of).  Maybe you have a really cool idea, but time and material costs spent are better put toward your growing army (or armies, as the case may be).

Perhaps, even, while one may have the desire and excess time to put together some foam core buildings and hills, without the professional detailing done by ... you know... professionals... it can make the board look a bit... blah, especially in comparison with all of those beautiful looking minis.

Of course, you can always buy some terrain sets from Games Workshop, and even Gale Force 9 has come out with some interesting kits.  They certainly have the same beautiful detailing as the armies we work so hard on (and spend so much money on, to boot), but a table full of terrain like this can come close to the cost of a whole new army at times.  Even if you buy textured plasticard and other matierials to flesh out those foam core buildings, you can start racking up the benjamins trying to finish your projects.

Being a lover of cityfight terrain (and an enjoyer at the very least of the rules, as little as I've been able to play them), I like the ruined building/desolated city look.  Lo and Behold, GW put out an Imperial Sector kit that contains enough modular pieces to build 4-ish 3-4 level buildings (in the traditional corner-of-a-building set-up).  They look great, won't be terribly hard to paint to a basic greytone standard, and alone is almost enough to fill a 4x4 to a playable level (a few craters and rubble piles to fill out the floor are appreciated).

All in all, the kit was about $100, and probably the best bang-for-your-buck that I've seen from GW in terms of filling up a table.  Two of these kits would rather comfortably fill up a standard 4x6, I daresay... although at that you're still looking at a sizeable chunk of income (at least for those of us in the still-poor post-grad stage).

So if you're starting to get serious about being able to fill that kitchen table (or a cheap 4x4 overlay from Lowe's like I have), I give to you a slightly cheaper alternative.

The company does all manner of hobby-related things... RC boats, cars, and planes... model kits from WWII to alien invasions... and, of course, a few really nice cyberpunk-industrial pieces for use in a few of our favorite games.

While I can't speak to the first-person quality of the building kits, I've been looking over user reviews and have added it to the list-o-stuff for holiday loot.  I do have a handful of pieces (mainly rubble piles) that I was lucky enough to find at my local Hobby Lobby (which seems to carry them on sporadic occasion.. although perhaps they could direct order some more for you).

The buildings are modular and quick-fit, so you can either glue them or leave them forever modular (who doesn't like to switch things up now and then?).  Selection of building type is limited, but being able to assemble freely pretty much nullifies this point.  You have a standard building-type thing (a 2-story + roof deal) with windows, ladders... basically what you want for generic building (although not very ruin-y, if that's what you're going for).
Then they have Hexagon and Platformer kits.  The former being a multi-story kit with ramps, ladders, and a few landings where minis can chill out for a nice vantage point, and the latter being more a mish-mash of ramps and walkway pieces.

Between the three, which I am assuming (correctly or no) can be snapped interchangeably, you can build about any type of building-esque feature, from landing pads to catwalks to a whole space-western city.

Also included in the building section are a couple of niche pieces... a power plant and chemical plant piece both add a little funky offshoot to the more generic selections.

Then you have all the extras... craters (painted or unpainted), rubble piles (in two different sets for variation), and yes, even a bag of bricks.

And did I mention the kits come painted?  Most are a metallic hue, one way or the other... but if you're looking for a quick out-of-box option, it'll do just fine.  And you can always spray it on the sprue (or off) and fix it up however you like.

The building kits run from about $20-$30, depending on size (some come in large and small).  Extras, like rubble or craters, are $12-$15.  And it's all about perfect for a nice distopian future, be it large army-wide combats or small, intimate gang-fights (shameless plug for the Necromunda league starting in January at the North Store).

I'll definitely try to get some pictures and personal reviews up after I've been able to get my hands on a few pieces... but until then, google is your friend.
posted by Anonymous Foodie at 10:25 AM