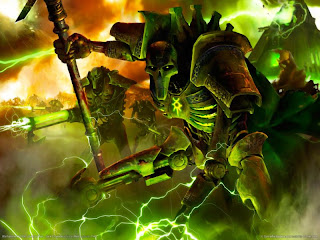 So I got my first test game in next last week with a proxy army against a new necron player.  We were both new at both of our armies, but I was shocked by how the Dark Eldar performed in a positive and negative way.  I of course forgot a ton of dark eldar rules.  The game ended up with a win for the dark eldar, but I obviously have a lot of learning to do with them. I plan on getting a few games in tomorrow with them. As normal with a new army, I will make a full post after 10 test games.  If I was playing in the The Indy Open GT ..........

Then I would probably work on getting my Dark Eldar up to speed.  A few things I noticed in my army that I was disappointed in was:

*My 2 ravagers and their inability to blow up vehicles for the first 2 turns.  That is right I only have 2 ravagers!!

*My mistake with my hellions of not using my pain token trick to give them 2 to start and getting the all important fearless token.

*I totally forgot about my +1 strength from the combat drugs! They would have made a difference.

*I screwed up when placing my webway portal! Don't put the portal so close to terrain.

*Loosing combat and running and getting caught sucks!

Some things I absolutely loved!!!!:

*My haywire blasters were amazing!

*The beastpacks did wonders against necrons

*The Webway portal provides an incredible boost to an already fast assault based army.

*Venoms are amazing at killing units

That being said, the necrons went down pretty easy once I got to them. I am not saying this will happen every time, but I look forward to continued practice.

Thoughts?
posted by Spaguatyrine at 10:33 PM