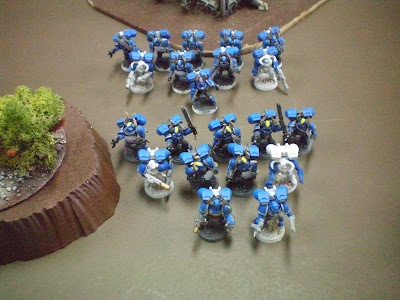 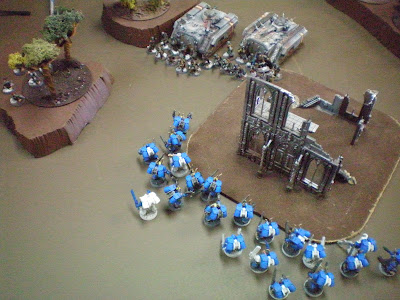 My first game was against IG, I killed off two vet squads and the chimeras along with ratling snipers. I lost a squad, so no bonus point.
Game 2 had me play against Deamons. The mission was to hold the center terrain piece. I move up and surround the terrain. This forced him to arrive in the back corners of the board or else have me assault into him. Once he did, I simply pulled away to the other side until I could engage on my turns. I took two turns wiping out his Horrors, until I was set up to assault his Fiends. I scored 6 wounds on them, and in return they got 7 rends against me. 2-3 rends would have been average, this was Chaos incarnate. I lost combat by 1, and of course ran. I only ran 6 inches, so he assaulted again. I lived, but the only rend he got was against my priest. I then had to pull away from the other horror squads and charge in with the second squad. At the end I had 4 marines left in one squad, and the powerfist and another marine in the second squad. I jump up, and assault the two horror squads that had moved into the center terrain. two marines vs 3 horrors, I lost combat because the sarge died, and the squad ran away again. Thus he had two half squads to my one half squad winning by 60 vp. (My only loss for the day)
Game 3 Pitted me against very well painted orks. He had 10 ard boys in a truck, 8 bike boys and 5 commandos. The mission was to have more in your enemies deployment. I moved up, shot the ork trukk, and then assaulted the occupants. At the same time I assault the bike squad with the priest squad. I won combat in both places, and swept both squads. Commandos then assaulted into my squad, killing 4 or 5 with the powerweapon/flamer thing. But ultimately were killed. 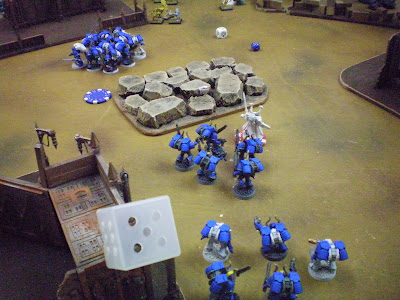 Because of the rankings, and only a few attendees I was pitted against the deamons again. I was hoping that he wouldn't get a good amount of rends against me and I would have a better chance. The mission had you rescuing a prisoner, so it moved and joined like an Infantry IC. You had to deploy 1 troop choice 12 back. Reserves came in starting first turn. I seized the initiative, moved up with a combat squad, took my prisoner and ran 6" back. My double flamer squad deep struck between his horror squad and his prisoner. His turn brought in his other two horror squads. My 10 man squad went after one of the new squads, my prisoner squad walked into my back terrain piece, while the other combat squad assaulted into the third horror squad. I had broken off the priest to engage the last horrors from the first squad. 1 priest vs 3 horrors. 4 attacks, hit on 3+, wound on 2+, I kill 1. Two attacks back, one hits, wounds, I fail my armor save, and then my fnp. Sigh. Later I went through it and there was a 2.5% chance of that happening. Chaos!! His fiends came in next turn, I shot at them, hid in terrain for a turn and then charged in tabling him. 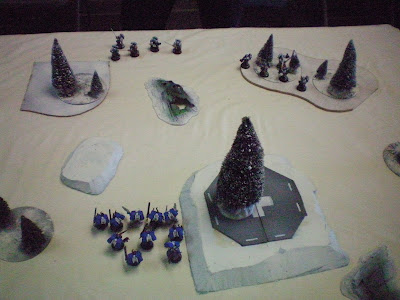 My last game was against Weinas and his GKs. In the previous round he had been undefeated and played Spagatyrine's wolves and lost. All three of us were 3-1 going into the last round. It was dawn of war and objective was to kill the enemies Leader. I hate dawn of war because I don't get my priest out on the table. He seized and roll on with razorbacks and opened fire on me. He was able to see with the majority of his units, and with out FNP, my marines quickly started dying. Two marines left, I moved forward, and hoped to live long enough to keep drawing fire. The last marine almost made it but went down to his last shot. My second squad with my leader and priest decided to not come in until turn 3, even with rerolls. I came in and my melta gun stunned the razorback with his leader. I had dropped at the spot where I would at least get some good cover from rending shots. He jumped his leader squad out and pulled them back to make a defensive line and started shooting. He dropped about 6 of my 11 guys in shooting. I passed my moral (I was scared I would fail again with this squad). I jumped over the razorback, and assaulted into his leader squad. I put my priest against the psycannon GK, and engaged the rest with the squad. I killed all but his hammer toting justicar, who swung back killing two more guys, but my powerfist then came in for the kill.  This left my remaining marines to consolidate 2 inches in the open in the middle of his army. He opened fire and was prepared to charge but the one marine that failed his armor save was my leader, so the Game went to a tie as we had killed each other.
Spag had won his game, and so went to First place, and with the tie Weinas went to second while I claimed 3rd. It was a fun day of combat patrol, I enjoy every game. 500 points is an interesting level to play at, I would definitely do a few things different next time. Maybe I would bring some more shooting, and the powerfist really didn't do too much for me.
posted by TheGraveMind at 6:32 PM