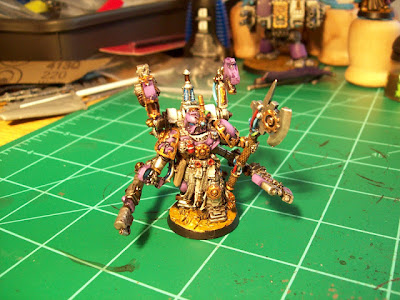 Tippcon went well for the newly revealed grey knights.  But how did it end up......?


Tippcon used the Adepticon style missions with some interesting twists and turns.  The GT style format was a 4 round tournament.  Thank you to all my opponents who gave me a great day of gaming.

I played Aaron "The Baugh" Baugh and his deathwing in round 1.

Keith from Lafayette with a Crowe/Psyback list in round 2.

Henry Kim from Chicago with his Necron AV 13 list in round 3.

And last but not least Dustin Sanders (aka Nemesis) with his venom spam/Hellion dark eldar in round 4.

They didn't stack rankings so I ended up the best Warmaster or general, but the best painted probably should have stacked.  Either way Outremer painted my army so he deserves the credit.  The pictures don't do justice to how the army looks in person!  I am very happy with the way the list played.  The list I used was:

Some highlights of my games are below:

Round 1-Aaron Baugh and his deathwing had some horrible dice loosing a ton of terminators to bolter fire, but when you shoot that many and they are strength 5 loads of dice will make you roll 1's.

We were going to call the game and then Aaron asked me if I wanted to play for the massacre.  I told him that I don't try and table anyone then I read the sheet and realized I didn't have the capture and control objective.  It took a 6" move thru cover role and a 4" run to make it on the last turn, then 2 krak missiles and 16 storm bolter shots to knock me off the objective, but he missed with his krak and I passed 2 of 3 saves keeping me on the objective.  (Classic) Thanks Aaron!

Round 2- Keith went first and had a decent deployment until I seized on my second roll from Coteaz!!! Ugh!! Sorry Man!  The Assassins then proceeded to eat purifiers.  A classic firefight between 2 psyflemen dreads back and forth until Keith's finally cracked.  And my 1 grey knight holding an objective passed 1 6+ go to ground multi melta save, and 3 strength 8 autocannon shots to not make a 2nd 6+. Arg!!! Good game Keith.

Round 3-Henry was a beast, winning the roll to go first and immobilizing a rhino and a dread in turn 1 of shooting.  He was able to roll 4 arcs with his tesla on turn 1. Thankfully he only killed 1 knight.  Turn 1 I did a gutsy move and moved out in the open and put all my guys on the ground counting on a great turn of shooting to cripple his army. I only killed 2 wraiths, 1 ghost arc, and immobilized a annihilation barge, (Though warp rift is awesome against necrons!!!!!! Auto pen your stupid force fields!!! Haha!!)  This failed as his turn 2 and 3 he was killing me off left and right. I couldn't pop anything and his 1 wraith assaulted a 6 man strike squad, lived, made 5 invol saves, and I lost 1 model and he escorted them off the table! My turn 3 the game changed and I popped every vehicle save 2.  Coteaz and 3 strike squad knights then wrecked a ghost arc, a 10 man necron unit then everyone died except Coteaz where he went and passed all his 2+ saves to go and destroy an annihilation barge by himself.  NICE work COTEAZ!  And the funniest part of round 3 was when 10 necrons who shot and immobilized a razorback on the opposite corner couldn't kill it. In fact the razorback killed enough for the necrons to roll boxcars and run off the board!!!

Round 4!!!! The big man on the south side of Indy Dustin Sanders-aka Dark Eldar master and I finally got in a game in a tournament.  I won't discuss his easy pairings in round 2 and 3 against tyranids, but....wait I just did!!! LOL just kidding Dustin.  We started the game and by turn 2 it was looking very bad for Dustin with his vehicles being smoked off the table then on turn 3 his luck changed and he just started killing everything. I failed to crack the vehicles he had left and it came down to turn 5 where I had 2 and he had 2 objectives and I had the middle objective for capture and control.  If the game ends I win but we move on and I know I am in trouble. At this time his baron had become fearless and should have died 2 turns ago but had passed 8 thunderhammer strikes already, 2 dreadnought hits, and a few other power weapons strikes. He jumps out of combat and destroys my psybolt razorback on the far objective.  He also proceded to kill my 1 strike squad marine on the middle objective that will get me the win or put us back to a tie if I cannot kill his baron.  I have a 2+ cover save which I fail on the first roll from a dark lance!!!!!!!!!!! Really?????????????!!!!!!!!!!!!!!!!!!!!!!  I almost threw up in my mouth when that happened.  I was in deep doodoo.  I then quickly calculate the tie break victory points while the judge says 3 minutes.  Every one is surrounding the table watching and I have 1 psybolt razorback, 2 dreads with 1 arm each, 3 henchmen with las pistols and close combat weapons, and coteaz that can shoot into the baron. I start with the las pistols and score 2 wounds. He passes both. I shoot the 1st dread and only wound 1 time and he passes the 2+. I then go the the razorback and hit and wound all three. He passes 2 and failed the third killing him instantly and giving me the win by having 10 kill points to his 8.  Narrow win but a blast!!!  If Dustin would have calculated the tie breaker before his last turn he would have won or at least tied because he had an easy kill point in a rhino that was immobilized and had no weapons and coteaz in a piece of terrain.

A great time and thanks to the Tipp Con team for putting on the event. I look forward to next year.

posted by Spaguatyrine at 7:55 PM