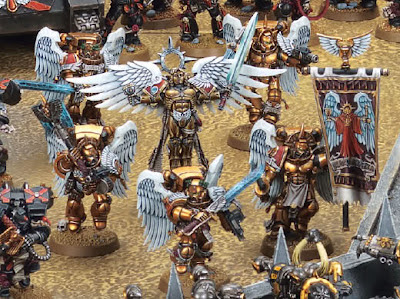 In the absence of an actual 6th Edition rulebook to look at, I might as well dive into the well of unsubstantiated rumors and see what lovely gifts GW is giving me in a few weeks. Well, specifically my Sang Guard army. By all accounts my Tau will have to remain on the shelf for a year or two yet. But as long as I don't mind playing Space Marine: The Game 40K, there seems to be some good stuff coming for the Emo Wing.

First up, here's my Sanguinary Guard list, which I've been using for over a year now, and have been quite pleased with. They've even held up pretty well versus Spag's Grey Knights, and that's saying something. :)


So let's look at what 6th Edition gifts GW is supposedly going to drop on my army.

1) Power Weapons Are Going To Be AP3

There's also the odd chance that my Master Crafted 2-handed power weapons might be given AP2 in the FAQ, which would let me take on Terminators. While most Termies without Fists or Chainfists would have trouble killing me in return.

AND...  there's always the possibility that GK Purifiers will not have true Force Weapons, making their I6 Halberds only AP3 instead. Awe! Mephiston happy!

Hey now! I really will be an army of flying Terminators!

Supposedly this comes from the new 'Jink' rule. Cool. This only helps me, since I rely on my Speeders for fire support. I guess GW really wants to sell that new overcosted Stormtalon model. :)

4) I Can Group Up My Reserves

Supposedly we'll all be able to group up our reserves into 'Reserve Groups' which come in together on one die. So that means I can put all but 2 of my units in one group and leave the last 2 separate for 3 dice that can be (thanks to Decent of Angels) re-rolled. If any one of them succeeds, the group can come on. Nice.

5) Unit With Jump Packs Can Re-Roll Their Charge Distance

All good for me. Not so good for everyone else. :)

6) Dante Will Be Rolling Up Special Rules

Seems that everyone's general will get some sort of random special ability before the battle. There's a 'Personal' chart and a 'Leadership' chart. Seeing as how my entire army is already Ld10 and fearless, I don't need a leadership boost. So I can try for the random rule that makes Dante scoring. :)

7) I Can Buy Terrain To Hide Behind

So can everyone else. But having a nice building to hide behind will really boost my survivability in the early game. A 6" high wall that's 12" long should do nicely. :)

8) 40K Terrain Is Getting Fantasy's Screwed Up Random System

Awe. Did that wood just eat your Guard? Good thing I can just jump over it. :)

9) Land Raiders Will Be Making A Comeback

Sure, they'll have a few more structure points or whatever. But I can deal with it. Make the Termies get out and they can try and play tag with me. :)

So while everyone else will have to buy bucket loads of new stuff in order to win, I should be good. Assuming the rumors hold up, my army will go from being Pretty Good but not great to BOW DOWN BEFORE THY FEATHERED MASTERS AND GIVE US BELLA YOU FRAKIN' SPACE PUPPIES!!!

Or something like that. Maybe I'll have to paint them after all. :)

Of course the downside is that everyone will be playing Sang Guard armies pretty soon. As they're one of the cheaper army options. Oh well...