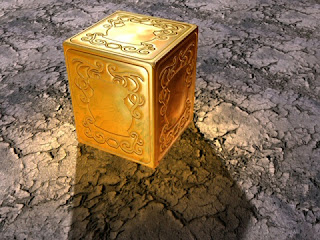 My Dark Eldar army has gone through three editions now, and (huzzah!) a single codex change.  Every army changes with either of these things... weapon load-outs become more or less optimal, transport options come into the light or under fire... even something as simple as squad size may come into question.

Looking through my warriors today (I had a few touch-ups to do on pewter figs) I got to wondering; after so many incarnations (and it's really less than most armies deal with), so many changes of "what is my basic troop"... if I pulled out all of my warriors and broke them into squads, utilizing as many as possible while retaining useful choices, what would I be looking at?

I came up with the following:

I've never looked horribly much at splinter racks, but after finally doing so it seems that, at 24", the upgrade gives the squad inside (roughly) the same wound potential as the dual-cannons of the Venom.  You also still have the Blaster, and of course the Dark Lance from the Raider itself.  And of course if you close to within 12" you're adding the extra hurt of double-tap.

When it comes to Raider vs Venom squads, you in essence are making a choice between long-ranged anti infantry or long-ranged anti tank.  Obviously the Raider squad above costs about 50% more, but you have added survivability (both of the vehicle and of the squad inside), higher leadership, and an extra dark matter shot.  Mind you the cost could easily be cut by 15 points if you drop the blaster (adding to the fun of splinter racks) but as I said I was intent on using the models available, and this is how it best worked out.
Were I to find myself 3 more painted warriors to replace those blaster carriers, I could use them to form a 2nd squad of Trueborn in a Raider, giving me a dedicated anti tank unit for about 150... but that requires more painting to be done.

Back to the point at hand...

Once I got this far, I couldn't keep myself from wondering just how many points (again, using as much as possible in viable configurations) I'd accumulated.  And so it began - the great tallying of The Shadow Stalkers of the Kabal of the Twilight Wraith.

(3x) Flyer.  Razorwings, Void Ravens, and eldar Nightwings are all the same amount of points.

This little raiding force comes to a grand total of 3579 points.  It leaves 2 Raiders and 2 Splinter Cannon warriors unused.  Not too terribly shabby.

If I were to re-purpose the three blasters into a Trueborn squad (requiring 3 new warriors to be painted), and fix up a busted Ravager into something table-worthy, I'd clock in at a clean 3800.

So... who's up for some Apocalypse?
posted by Anonymous Foodie at 8:08 PM